If any musician has been outspoken about their love for cemeteries, it’s Morrissey. Not only has the former frontman of The Smiths been photographed at several graveyards throughout his career, but he even refers to these places in his lyrics. His famous song Cemetry Gates has become the anthem for many taphophiles and cemetery enthusiasts. In this post, you will find a collection of portraits of Steven Patrick Morrissey aka Moz himself, shot at several beautiful graveyards around the world.

Before we admire the photos, let’s dig into the symbolism of the subject. A cemetery is the final resting place where we bury our loved ones. When we apply some self-reflection and a decent amount of death awareness, we will soon realize it is also the place where we will end up ourselves. Cemeteries not only remind us of having to say goodbye to the people in our lives, but also of having to say goodbye to life ourselves. This way, a cemetery visit can be a practice in contemplating mortality.

There is a certain sense of melancholy that comes with being aware of the impermanence of life. Death is both a deeply existential subject and a spiritual one. Tapping into this and exploring what death truly means to us can bring us great insights that help us shape our lives in a way that feels right to us. It’s no wonder that mortality is a big source of inspiration to artists, writers, poets, and musicians such as Morrissey.

Through his cemetery portraits, Steven Patrick Morrissey embraces his mortal side, and in a way, invites the viewer to do the same. To see the beauty in decay. To love death the same way one loves life. As his lyrics go:

So we go inside and we gravely read the stonesAll those people, all those livesWhere are they now?With loves, and hatesAnd passions just like mineThey were bornAnd then they livedAnd then they died

Possibly the most famous cemetery shots of Morrisey were shot by photographer Jo Novark. Jo was also known as The Smiths’ press officer Pat Bellis. Morrissey poses with a headstone that carries his family name.

Found on the web: “Morrissey admits to an obsession with death and a fascination with tragic figures, like James Dean, who died in a car crash at age 24, and Oscar Wilde, who was imprisoned for his homosexuality and later died destitute at age 46. He told Spin magazine in 1988: “I have a dramatic, unswayable, unavoidable obsession with death. If there was a magical, beautiful pill that would retire you from this world, I think I would take it.”

I found ten pictures of this photoshoot, but suspect there must be more. 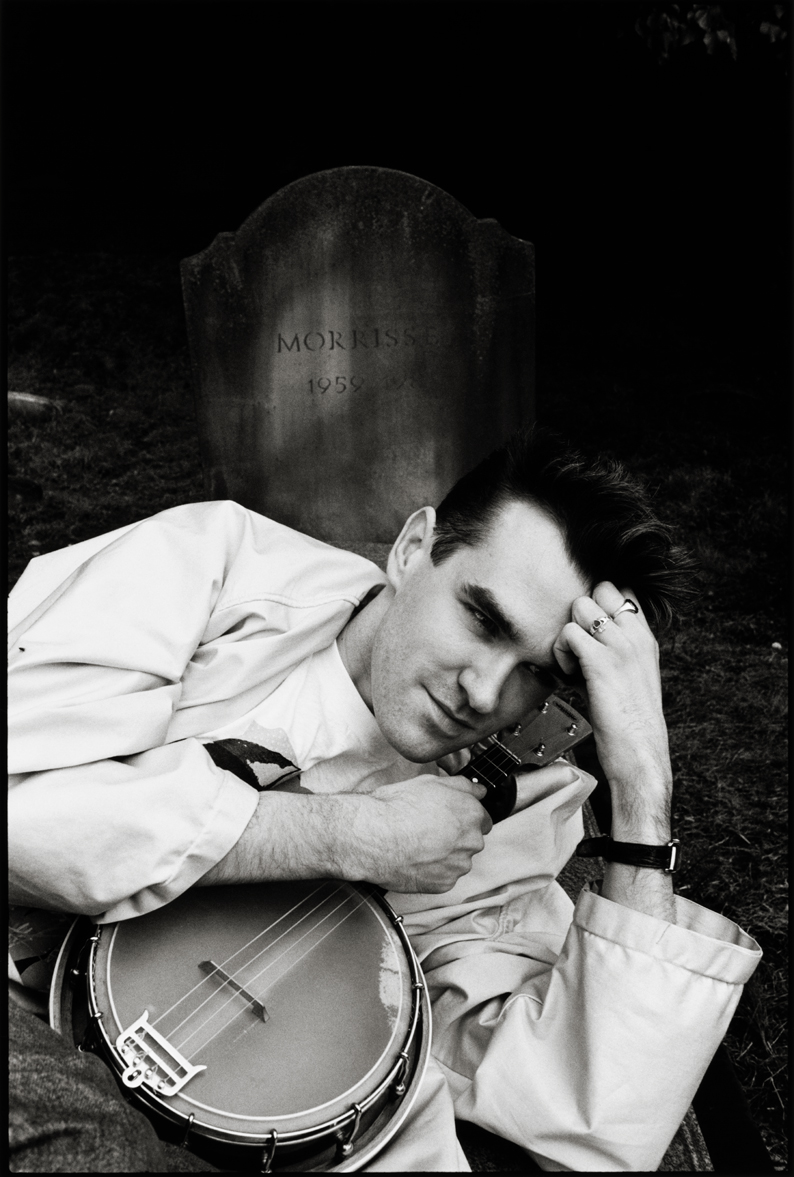 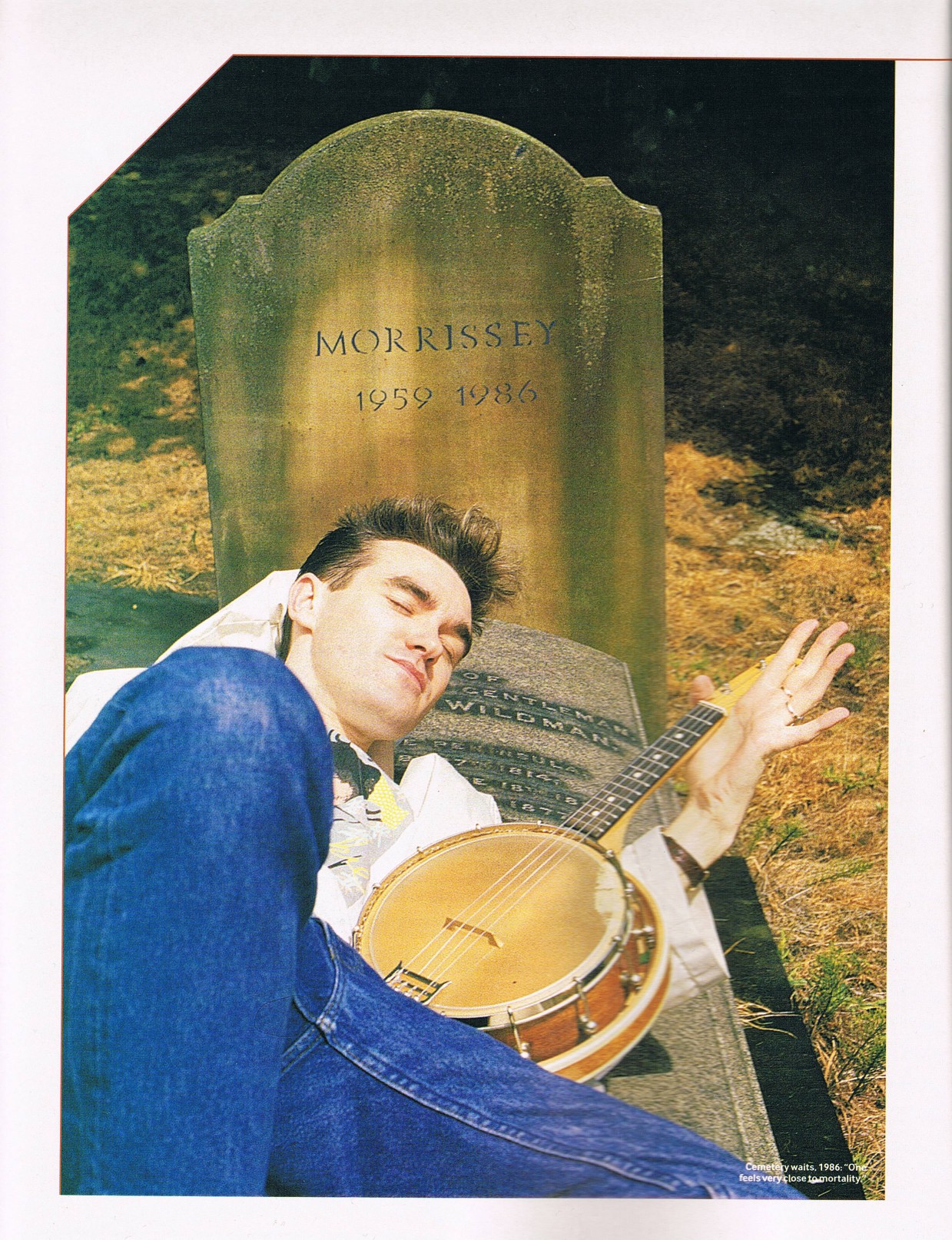 Morrissey’s video for the song Suedehead includes a scene that is shot at a cemetery. Park Cemetery to be exact, in Fairmount, Indiana, the hometown of the late actor James Dean. Morrissey copies a photograph of James Dean who poses with the headstone of Cal Dean, who is thought to be James Dean’s grandfather.

Morrissey had a strong fascination for Dean. In 1981 he even wrote a book about the American actor, James Dean is Not Dead. It is said that Morrissey had developed such a strong love of Dean he had covered his bedroom with pictures of the dead film star.

In an interview about his love for the movie icon, Morrissey explains his obsession as follows:

“I saw Rebel Without A Cause quite by accident when I was about 6. I was entirely enveloped. I did research about him and it was like unearthing Tutankhamun’s tomb. His entire life seemed so magnificently perfect. What he did on film didn’t stir me that much, but as a person, he was immensely valuable. Everything from his birth in a farming town to coming to New York, breaking into film, and finding he didn’t really want it when he had enormous success. At school it was an absolute drawback because nobody really cared about him. If they did, it was only in a synthetic rock and roll way. Nobody had a passion for him as I did – for that constant uneasiness with life. Even though he was making enormous strides with his craft, he was still incredibly miserable and obviously doomed. Which is exactly the quality Oscar Wilde had. That kind of mystical knowledge that there is something incredibly black around the corner. People who feel this are quite special and always end up in quite a mangled mess.” 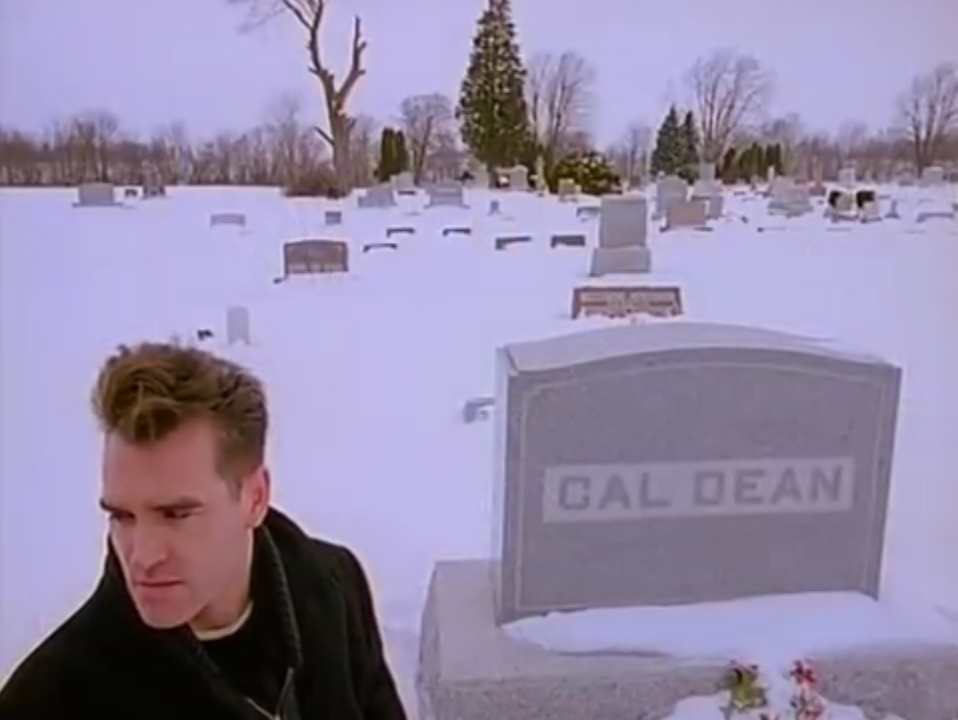 Any true cemetery enthusiast will know where they want to be buried themselves when they die. In an interview with the Daily Record, Morrissey expressed his wish to be buried at Hollywood Forever Cemetery in Los Angeles.

He declared, “I like Hollywood Forever. I’ve sat there for a very long time and felt quite good about it.” The singer explained that he decided on the cemetery after visiting the grave of The Ramones singer Joey Ramone. “I always felt I wanted nothing more than my name, birth date, death date and all three names, Steven Patrick Morrissey,” he said. “And I’ve even considered putting money down for reserving a spot.” 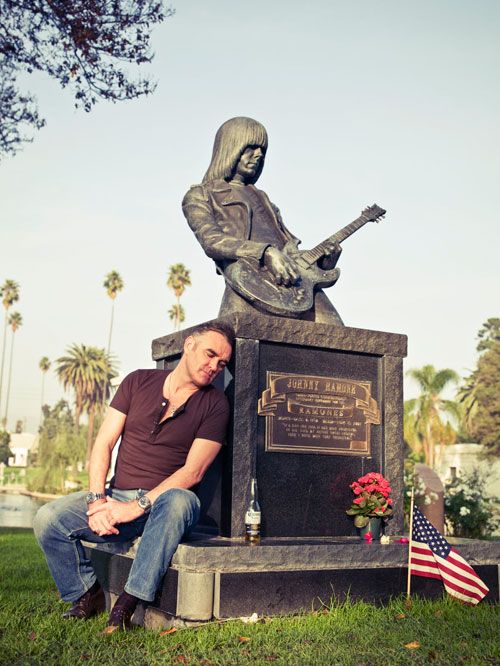 He also posed among the tombstones of Hollywood Forever Cemetery for the cover of the Redondo Beach / There Is A Light That Never Goes Out single, shot by photographer Sasha Eisenman. Besides the album art, I found some behind-the-scenes shots from this epic shoot, some of which were published in the magazine Tokion in 2004. I especially love the final one, where Moz poses belly down outside the cemetery gates, in front of the sign of Hollywood Forever. 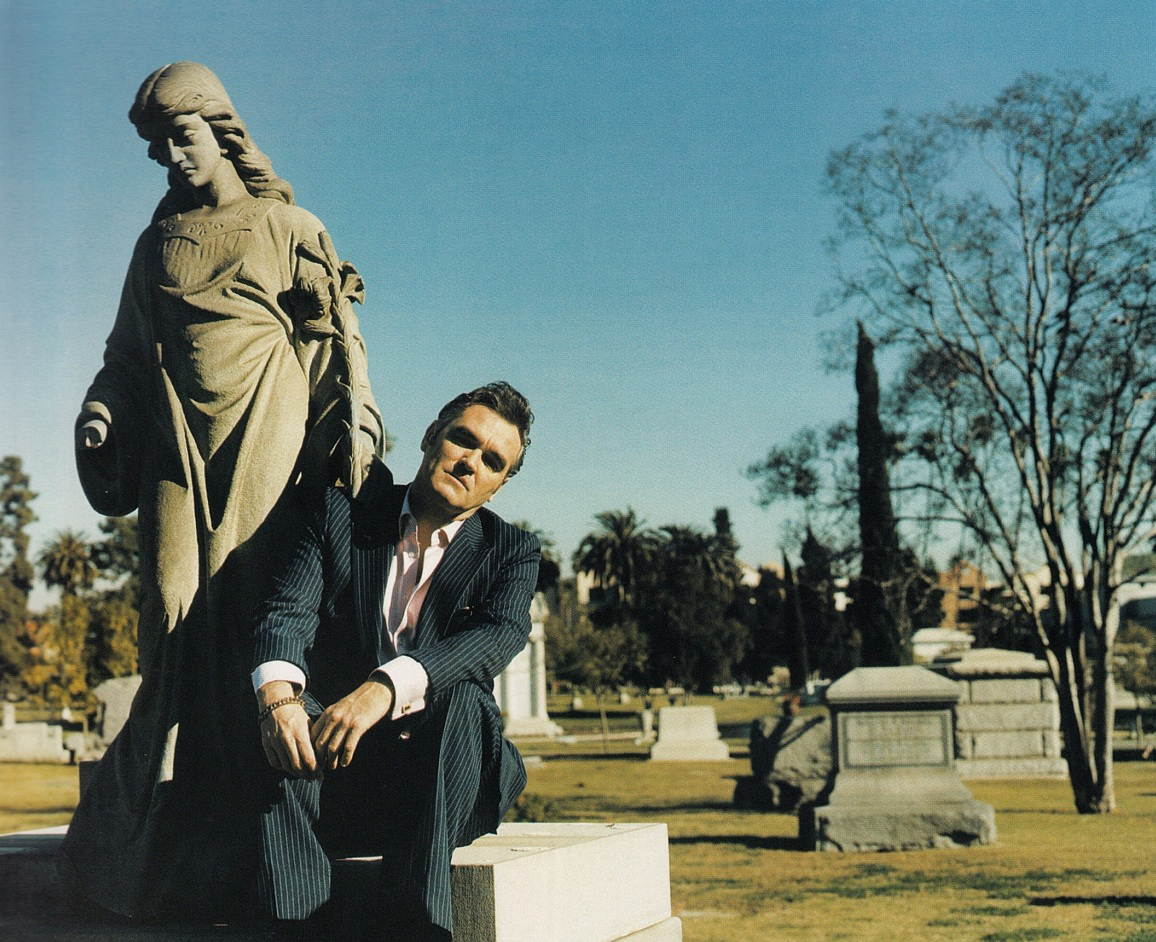 Morrissey at the grave of John Keats

Morrissey likes to pose with the graves of his idols. Here he poses with the headstone of poet John Keats, who is buried at the Protestant Cemetery in Rome, Italy. Keats died of tuberculosis in Rome, at the young age of 25. Posing with a grave is a way of remembering someone who was special to us, someone who inspired us. Taking a picture and capturing this moment somehow bridges the gap between life and death. Between our world now, and the world of those who lived here before us.

Whereas some people may find it strange and morbid to pose with a grave, I think Morrissey sees it as a way to pay his respect. 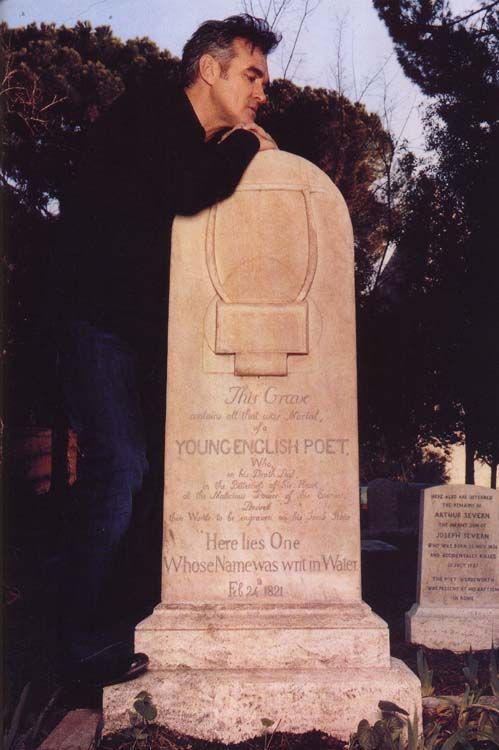 Morrissey at the grave of Oscar Wilde

In Paris, Morrissey visited the famous Père Lachaise Cemetery to see the tomb of Oscar Wilde. As you can tell from the third image, Moz is a big Wilde fan. He stated, “Most of my inspiration does come from outside music – especially literature and particularly Oscar Wilde.” Other cemetery photos of Morrissey

Finally, I found pictures of Morrissey at Friedhof Grunewald-Forst cemetery in Berlin, where he visited the grave of Nico, as well as a photo of him in front of the grave of French author Colette, and one in front of the mausoleum of actor Billy Halop. In the final photo, we see a portrait of a young Morrissey, most definitely at a cemetery. Judging from his clothes I believe it’s from the same promo shoot done by Jo Novark at the beginning of this article.

From one cemetery lover to another: may you visit many more during your time on this earth. 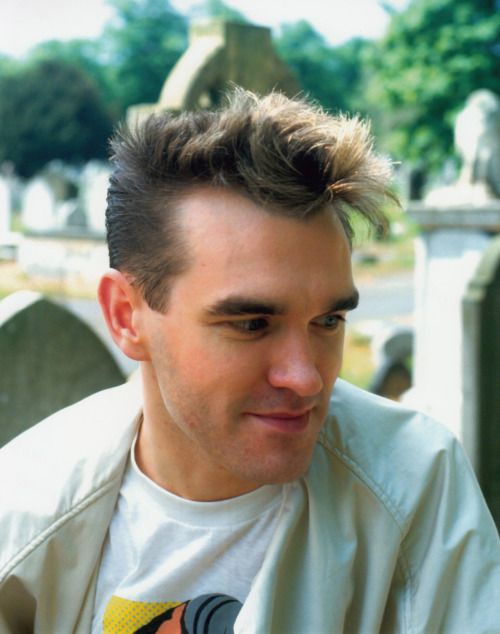