The Halloween period is often a particularly gloomy one. As I shared earlier on in my newsletter, aside from all the spooky celebrations, this is also a time for reflection – even if we are not intentionally setting out to do so. In this piece I want to reflect on the ways we attempt to make sense of bereavement: meaning-making through death rituals.

Originally the days around Halloween, aka Samhain, were dedicated to remembering the dead. Through countless rituals stemming from Celtic Pagan roots, people honored their departed loved ones. In several cultures similar customs are carried out to this day. For example during the Dia de los Natitas (Day of the Skulls) in La Paz, Bolivia, where human skulls are perceived as holy items with healing powers and are brought together to be celebrated, and the Mexican Día de Muertos (Day of the Dead), where people build altars, decorate the graves of their loved ones and have picnics at the cemetery.

“No matter our preconceived
expectations of how we will respond when confronted with death, the actual ways in which we deal with it might be very different from what we anticipate.”

But this reconnecting with souls on the other side could work both ways: some say the spirits actually come out during this time when the veil between two worlds is temporarily lifted, and meet in the land of the living. In the earlier days, people would leave food offerings outside their doorsteps in case the dead would pass by. Some would even set the table with a plate for their deceased loved one and invoke their spirit to return, as it was believed the dead could travel back to their home for one day a year.

Throughout human history, we have invented rituals to remember and reconnect with the dead. Studying the social evolution of these rituals can help to make sense of what we are doing today. But not all our rituals can be so easily explained. 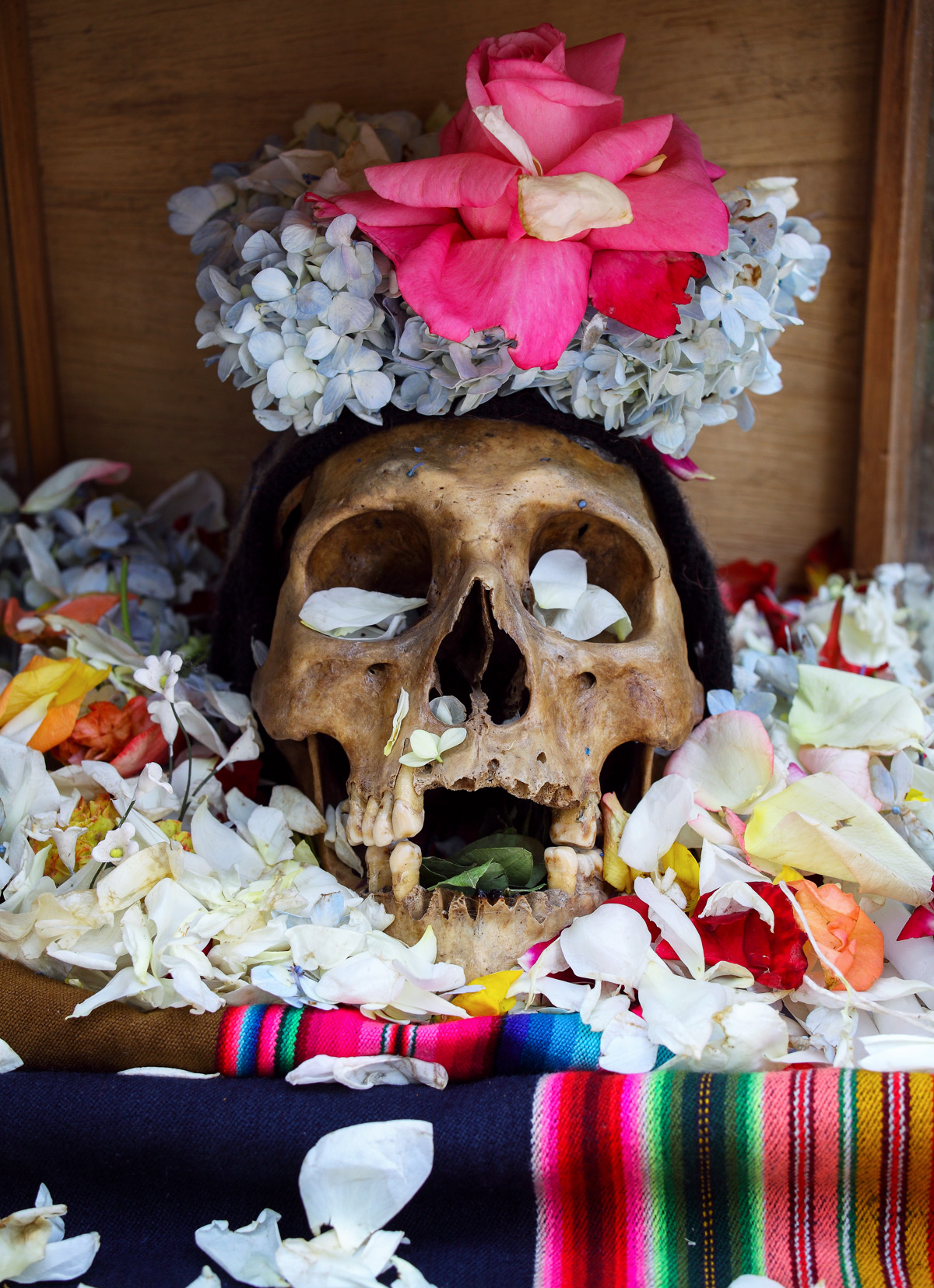 For example, why is it that many people communicate with the dead, for instance by visiting a grave and talking to the person buried there, even when they are not necessarily religious or believe in an afterlife? And why do we put so much effort into creating well-maintained graves for the dead? As if we value their opinion in death just like we did during their lifetime, even when we do not necessarily believe they are able to physically witness our efforts and results. In response to this, many would argue they do believe the dead can still “somehow sense things”, regardless of religious convictions.

I recently had an eye-opening experience that put these questions into perspective for me. Back in August I went on a guided tour at a crematorium, as I shared with you guys in this behind-the-scenes post. I was invited to glance inside the cremation chamber while a body was being cremated. Although this might be something not everyone is comfortable with doing, I did not have to think twice about it as my curiosity and fascination instantly overruled my fear of what I was about to witness.

“The image of the incinerated body – unidentifiable to the eye; an open ribcage surrendering itself wholly to the flames – was more serene and peaceful to me than I had initially expected.”

The image of the incinerated body – unidentifiable to the eye; an open ribcage surrendering itself wholly to the flames –  was more serene and peaceful to me than I had initially expected. However, it did turn out I needed some time to process the experience. For the next hour while the tour proceeded, the image of the burning body kept reappearing in my mind’s eye without me consciously wanting to be reminded of it. I would be having a conversation with someone about the interior design of the facility, or some other unrelated-to-cremation-itself subject, and there it was: the blazing corpse, burned into my retinas. I realized that if I would not have had such a strong stomach I could have easily become unwell. I looked around at the other participants in my group and wondered if anyone felt this way. Later I discovered that one girl did. She nearly fled the building.

After a few hours had passed, the image finally faded from my mind. Back home I reflected on the happenings of the day. I caught myself feeling surprised about having such a strong response to something that had felt so natural to me at first. I didn’t think witnessing a cremation would give me a different emotional reaction than I had rationally expected. From a young age on I have witnessed the deaths of loved ones and have been confronted with dead bodies. Yet this one incident still stirred me in ways I could not have foreseen.

It made me realize how we don’t always act the way we think we will. No matter our preconceived expectations of how we will respond when faced with the reality of death, the actual ways in which we deal with it might be very different from what we anticipate.

“We create rituals to give meaning to that which we can not explain; these rituals are the tools that enable us to cope with death.”

Without question, the hurt of losing a loved one and the trauma of witnessing physical death affect our psyche. We need ways to process the emotions that arise from these events, which is hard when do not fully fathom the meaning of death. This is where I believe rituals originate from. We create behavioral structures and symbolic rituals to give meaning to that which we can not explain; these rituals are the tools that enable us to cope with death.

When you look at how the natives of La Paz celebrate death in a very tangible way, it inspires me to think of how we could invite the reality of death back into our Western culture. Integrating death-related imagery in our lives during Halloween is one thing, but we can take this many steps forward. Instead of using death as something to scare our children with, we can use it to transcend our fears. Would this not minimize the traumatic effect once we are finally faced with death on a more personal level?

Let’s celebrate death and stop hiding (from) it. In truth, we are all skeletons in disguise. Happy Halloween!