Born in New York and residing in Johannesburg, Roger Ballen is a photographic artist who captures expressive portraits with an eerie undertone. His work reflects an exploration of existential subjects and invites the audience to go on a journey within themselves. I sat down with Roger and asked him about his experiences with death, and how the theme of mortality is embedded in his life and art.

When were you faced with death for the first time in your life?
Roger: I think the most important experience with death I had on a real profound basis was when my mother was dying of cancer. She died in 1973, when I was 22 years old. This was the first time I had any real contact with people close to me dying. Previous to that my grandparents died. This had some impact on me, but not the same kind of profound impact as when my mother died. Various dogs I had died. One got run over and the other got sick and died. Those were sort of minor events in terms of my experience with death. Then my father died two years ago, he was 97. You know, there are not that many close relationships you have in a lifetime. Many people that I have come across and had some sort of relationship with have died. 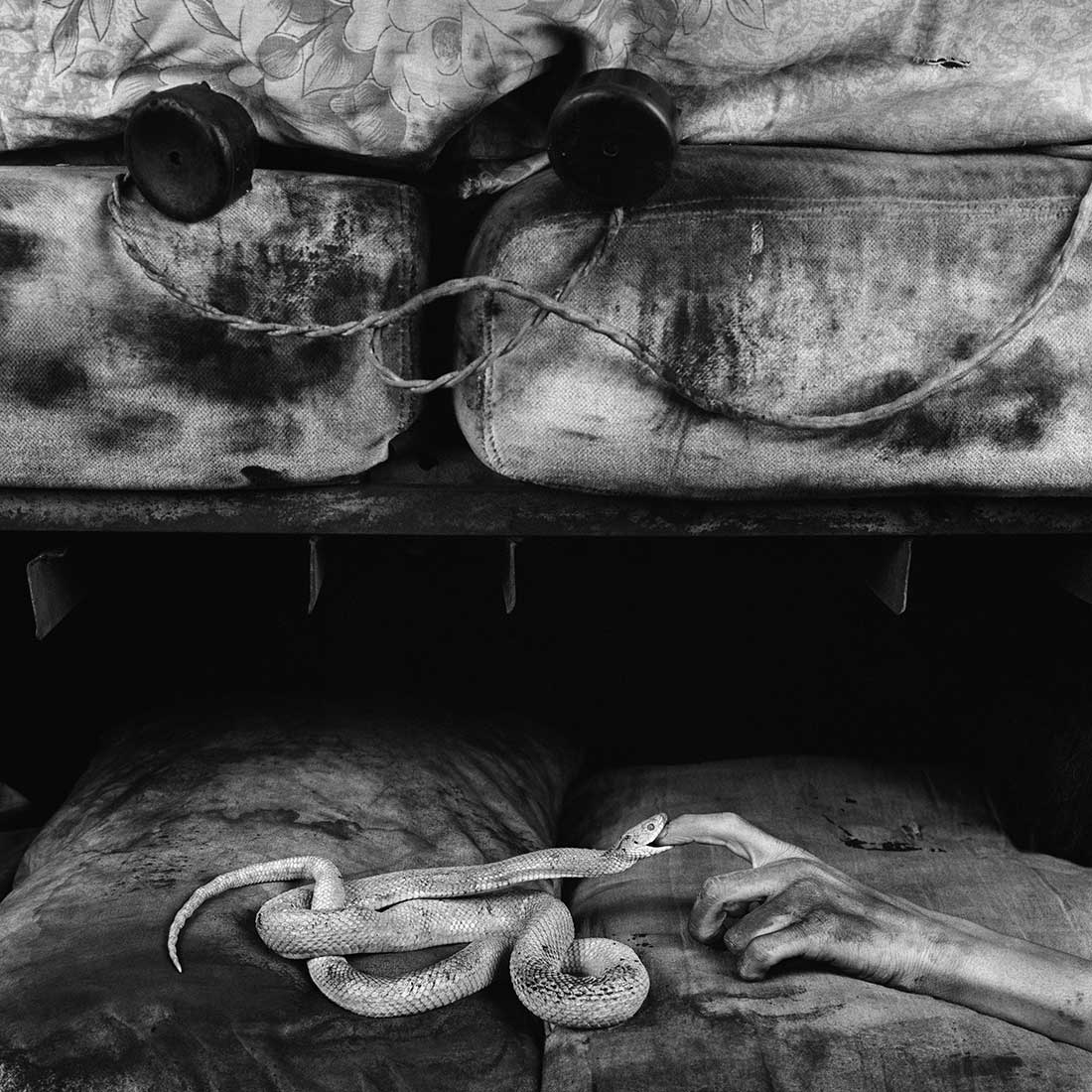 “Death is the alter ego. It’s the shadow side. It’s the partner to my life. It comes in all sorts of masks. All sorts of figures and forms.”

Have you ever been close to dying yourself?
Well, you never know how close you are. That’s the problem. Somebody could miss you on the street with a car by a meter or two. You could be sick with something and not know if it stopped before it got too far, up to the point where you almost died. You don’t know what’s going on in your own body. Maybe something strange happened in your body that could have taken you to that point, but you’re unaware of it. I think you’ve just got to be aware that death lurks everywhere. In a way, one is fortunate to live as long as one has lived.

What does death mean to you?
Death is the alter ego. It’s the shadow side. It’s the partner to my life. It’s not separated. It’s mysterious, enigmatic, hard to fathom. It’s complex psychologically. It comes in all sorts of masks. All sorts of figures and forms.

I recently released a new work, ‘Roger Ballen’s Theater of the Mind’. The issue is: what are you without your mind? Death is without the mind, you see. If there is no mind, then what is there? There’s nothing. You come from nothing, you go to nothing, and the mind is the intermediary.

You are 66 years old now. Has your perception of death changed over the course of your life?
When I was a young man I didn’t think about it so much. But the thing is that as you get older, you obviously feel that you don’t have the same energy as you had before. You feel you are slowing down. You’re not able to present the same idealistic view of the world anymore. It’s like an animal preparing itself for winter. That’s what you do. As you get older you start to prepare yourself in all sorts of ways. For example, I’m doing a retrospective book next year. I’m trying to get my pictures in order and I’m focusing on the things that are important to me. It’s partly biological. Evolution is part of what the biology does. Human beings tend to behave in certain ways. And as everybody is unique at the same time, we deal with it in different but similar ways. 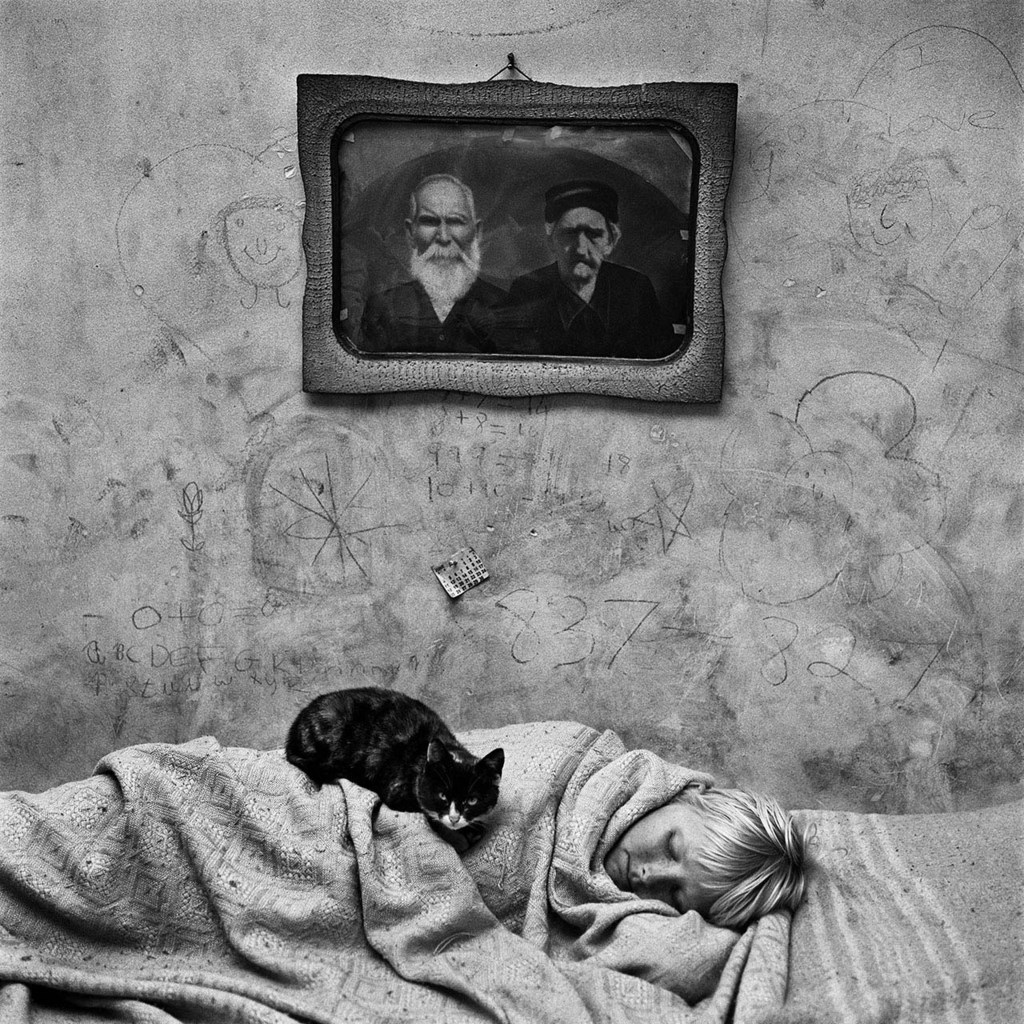 As an artist, you are leaving behind this whole body of work that will live on after you’re gone. Is this something you are very conscious of?
I’ve been working for 50 years now, so it is known to me that the work has a life of its own. And that’s the definition of important artists: that the art has a life beyond the artist. There are not many artists who can achieve this, because over time the work has to have relevance to the people, even though they weren’t part of that time. It’s important to me that the work has relevancy beyond my lifetime. But I can’t control this.

Were any of your photo’s made intentionally with a direct reference to death?
No. I always say that if you can define the picture with words, then it’s probably a bad picture. Pictures shouldn’t be so unidimensional. They should have multiple meanings, sometimes even opposite meanings. I don’t try to work with concepts when I take pictures, I just work with visual relationships. Visual relationships have their own energy and way of integrating into some sort of coherent meaning. But that coherent meaning should have multiple relationships. It should elicit people’s emotions in ways they can’t necessarily put words to. Then it’s a good work of art.

“I try to express the certain enigmatic qualities that I relate to when I think about death in my photographs. When you ponder the nature of death, you begin to understand what enigma is about.”

I read somewhere you see yourself as a psychological based photographer and I see your work as being very intuitive and symbolic. To what extent do you feel that your own beliefs influence your work?
I’m dealing with the existential human condition in my work. And dealing with trying to figure out who Roger Ballen is. Death is following you, it’s part of you. It’s even present in an animal. It’s in the genes of all the organic species of the planet. What does an animal do most of the time, other than eat? It’s trying to protect itself. It’s trying to survive because otherwise it’s done for. This is in the deep genes of anything living on the planet. So you can’t ever separate yourself from it. This is basic to anything living: it’s trying to survive so it doesn’t die.

I’m not necessarily just a scientific person. I like to have a poetic view of the world, but at the same time I can accept science too. I see death as something that transforms my imagination. It’s something I ponder and meditate on. I try to express the certain enigmatic qualities that I relate to when I think about death in my photographs. My photographs need to be enigmatic. When you ponder the nature of death, you begin to understand what enigma is about. The goal is to create pictures that have that same quality. I f you have pictures that have enigma, then perhaps they are making a more profound statement. 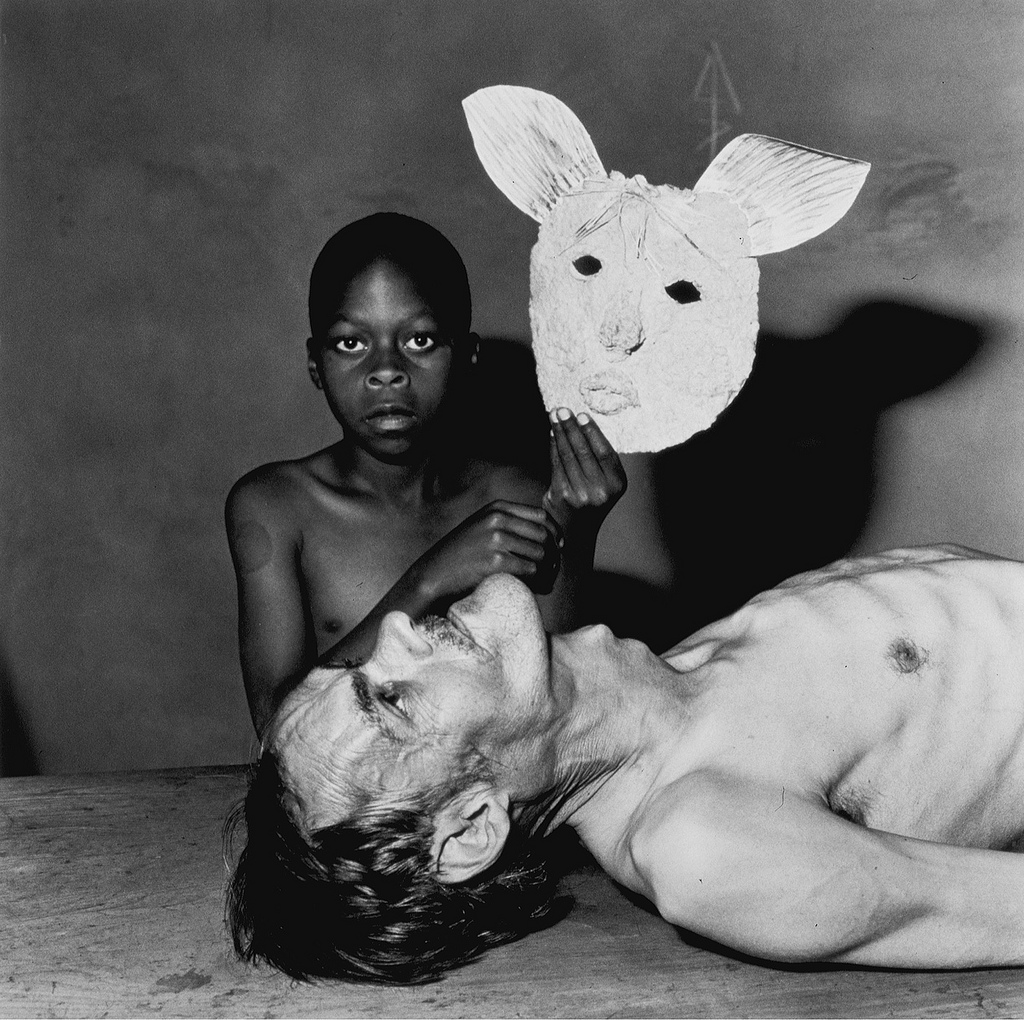 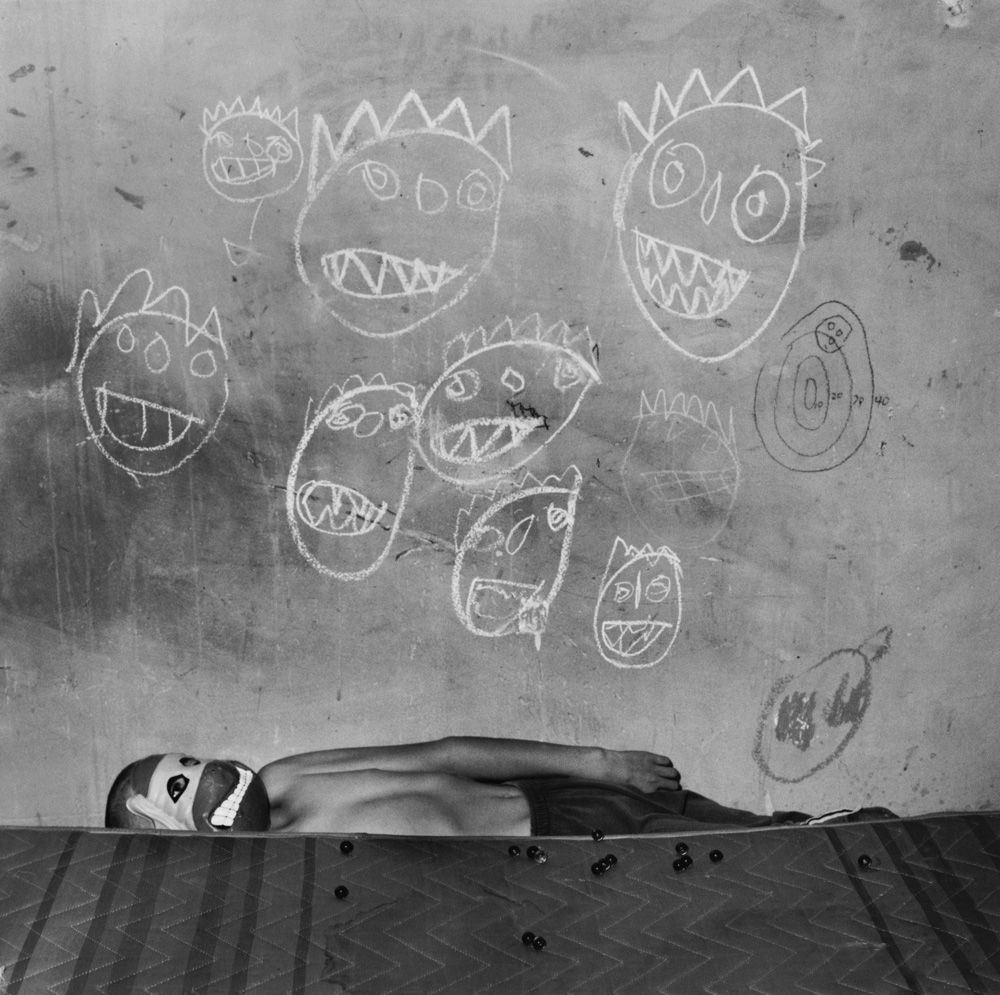 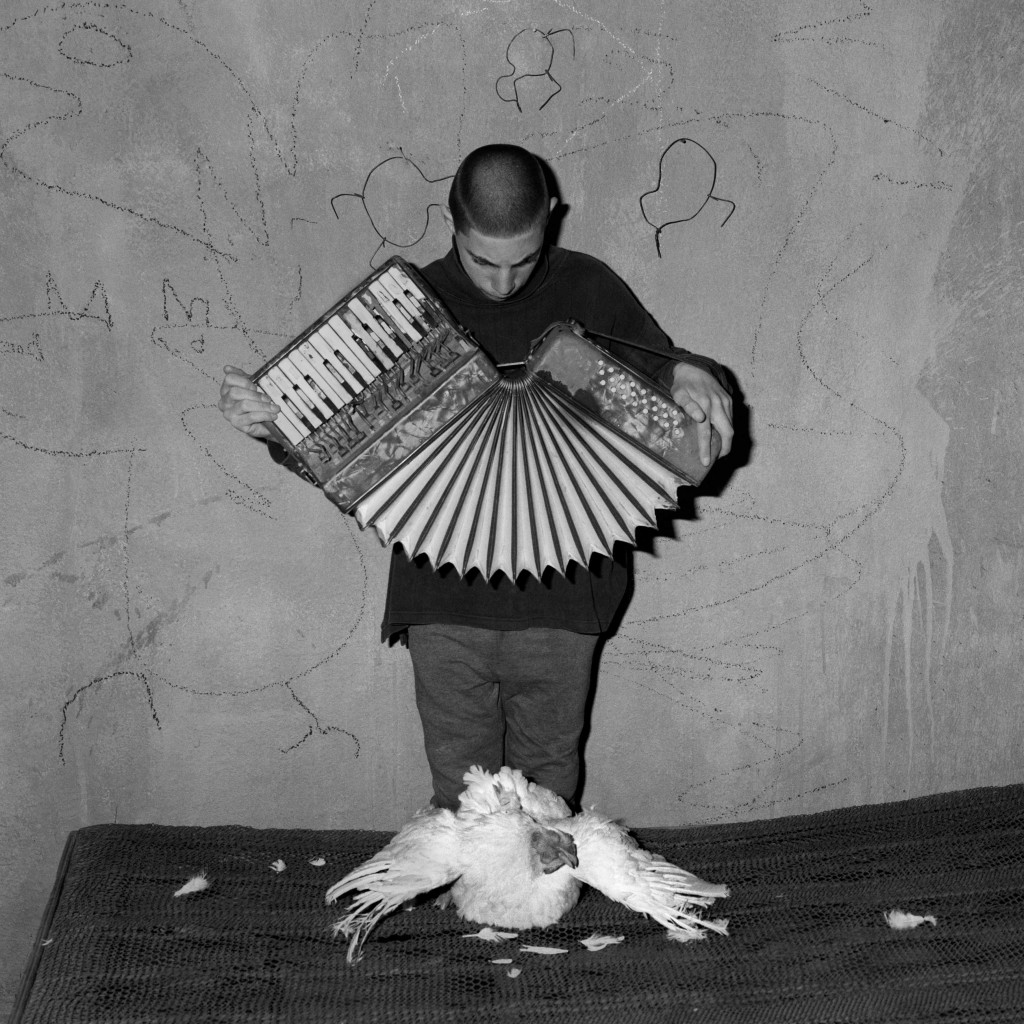 Have you ever experienced anything paranormal?
Everything I do is paranormal. That’s my concept of reality. It’s the thing I think is normal. To think anything else would be abnormal, but unfortunately society doesn’t view things that way. They’re scared of things getting out of control. They’re scared of enigma, they’re scared of chaos. At the end of the day, reality is just a figment of my imagination. Imagination is another thing that is paranormal. And even just sitting on the phone here, watching my lips move up and down, hearing the words coming out, what exactly is happening here? How is this possible? Isn’t it paranormal?

You have been living in South Africa for over 30 years now. What are the death rituals like over there?
I’m not an expert on African culture but I spent decades with Africans. They believe in ancestor worship and are much more into different types of spirits. When somebody dies it’s more of a ceremony or a ritual. Generally speaking there is a much more paganistic approach to death. And I think they have a greater acceptance of death, because people live in much more vulnerable situations. People here are dying all the time, at much younger ages. So death is much more part of life. I see this, because I am involved with this type of people through my work. So many people that I know die all the time. And the people around them are much more stoic about it, much more accepting, because it just comes all the time. People become used to it.

“As you get older you start to prepare yourself in all sorts of ways. Like an animal preparing itself for winter.”

Do you have any ideas and wishes for your own funeral?
I do have ideas and wishes, but I don’t think it’s going to happen like that. I will probably end up being buried in the Jewish cemetery in Johannesburg. But I remember once when I was in Latvia, I visited this old cemetery, with graves from before the Second World War. Most of the Jews in Latvia were murdered by the Nazis. The whole cemetery was taken over by the trees and nature. Leaves of the trees were scattered around the moss-covered headstones. The people buried there and nature itself intertwined in a certain way. It would really be nice to find a place like that, where the human body naturally decomposes in the earth and ends up as part of the tree. 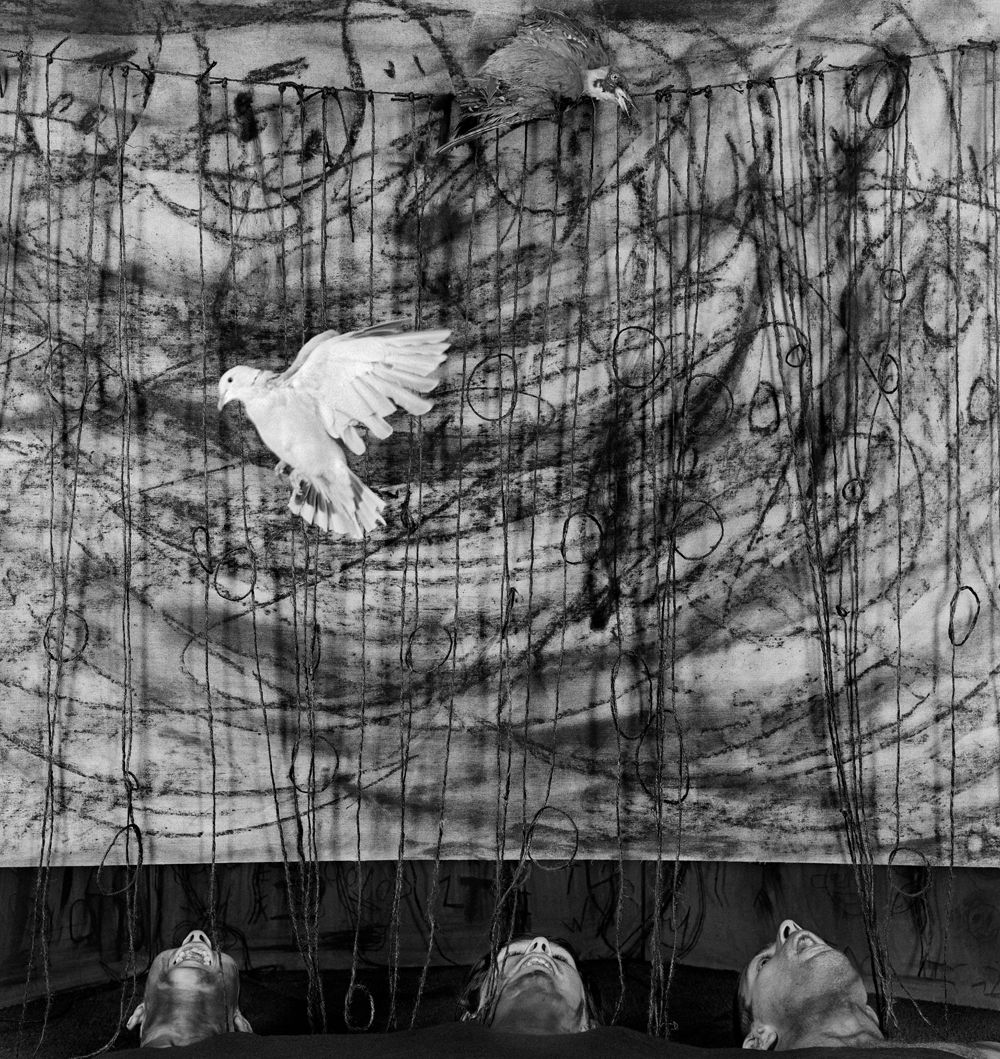