Rick Strassman (Los Angeles, 1952) is a medical doctor specialized in psychiatry and the author of the acclaimed book “DMT: The Spirit Molecule” in which he shares his groundbreaking research on N,N-Dimethyltryptamine (DMT) during which he administered 400 doses of the powerful psychedelic drug to 60 volunteers at the University of New Mexico’s School of Medicine. The participants reported having profound near-death and mystical experiences, hence its nickname “the spirit molecule”. DMT is present inside the human pineal gland and can be found in animals and plants as well. Shamans in the Amazon extract it from a mixture of plants known as ayahuasca and use it to go on spiritual quests. I asked Dr. Strassman about his own experiences with death and his thoughts on the connection between DMT and the dying process.

Do you remember the first moment you were faced with your own mortality?
Rick: Yes. I was lying in bed one night, maybe seven or eight years old. I realized that I would die, that I would be no longer. That didn’t bother me as much as realizing that my parents were going to die as well. That’s what struck me as extraordinarily painful. I began crying loudly and for a long time. My mother came in and asked what was the matter. I shared with her my discovery. She said, “Don’t worry. I am not going to die.” I was both confused and reassured, probably in equal measure.

Are you afraid to die?
Not afraid as much as terribly sad that it is all going to end. I’m also terribly sad I wouldn’t be around to contribute to this world any longer. I’m afraid to die in pain – physical or mental – but I know that will end, too.

Has your perception of death changed a lot over the course of your life?
When I first tried to understand death, it was in the setting of studying and practicing Buddhism, which like much of the East, works with the notion of reincarnation, a transmigration of souls. I liked my teacher’s theory which proposed that one’s life force is like electricity that goes through one light bulb and then, after that lightbulb is turned off or breaks, illuminates another lightbulb. It doesn’t necessarily disappear, and in a way, is affected by its history of having been in the previous lightbulb.

“When we understand what consciousness is, we’ll have a better sense of determining whether it exists outside of the body. That is, we’ll know what we’re looking for.”

Since returning to my Jewish roots, I have investigated notions of death, the fate of the soul and body, and related topics through a Jewish lens, in particular that of the medievalists. I’m not sure I find their teachings any more enlightening, but how they detail the nuts and bolts of moral cause and effect (“reward and punishment”), is more intuitively, perhaps genetically, appealing to me. That is, to optimize whatever post-death state there may be, we must optimize our pre-death activities: beliefs and behaviors. It then lays out in nice detail what those conducive beliefs and behaviors are, and which ones to avoid.

One major way in which my thinking has developed goes along these lines: The near-death state only describes near-death, not death itself. Since perceptions, feelings, and so on are inextricably dependent on the body, these may only be things which occur under the sway of the body. Once the body is dead, we have no idea what follows.

This is one of the reasons I have concerns about using psychedelics to ease the anguish associated with terminal illness. While indeed psychedelics may in some ways replicate the near-death state, such states may not be relevant to what happens after one dies. I wonder if one can free oneself from a lifetime of, for example, evil deeds, profligacy, and other vices simply through an ecstatic breakthrough psychedelic experience. It seems too good to be true. Which means that it may not be.

What’s to prevent someone from being a thoroughly horrible person throughout his/her entire life, while he tells himself that LSD is available to take before death? Then, he will make amends.

The late Orthodox monk, Seraphim Rose, has influenced my thinking along these lines; in particular, his books “The Soul After Death” and “Orthodoxy and the Future of Religion.” 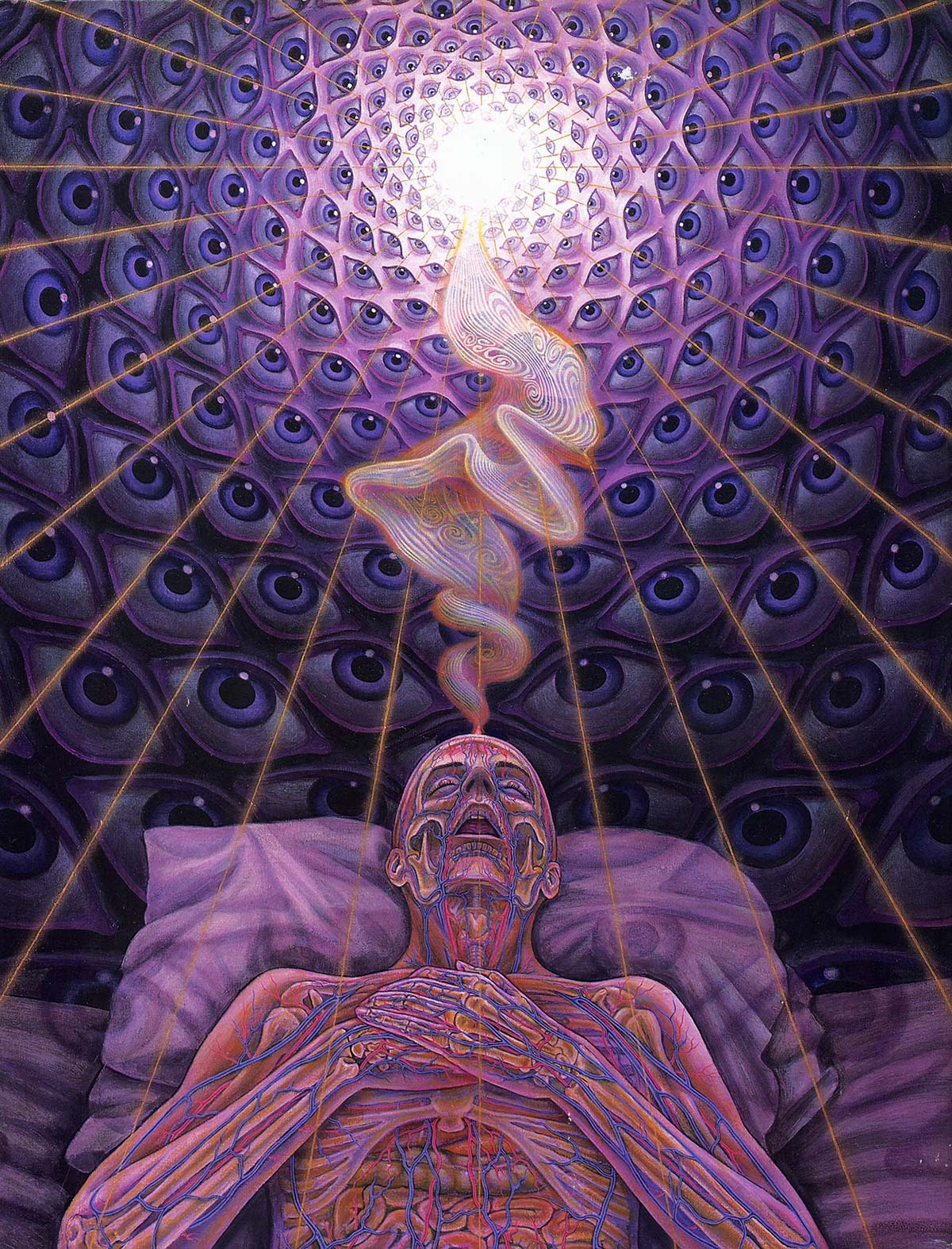 There is the hypothesis that, through meditation and fasting etc, the pineal gland can release DMT to induce a naturally occurring mystical state. Could it be that the ultimate trigger for the release of DMT is a physical state or sensation that the body recognizes as part of the dying process?
We now know that the living rodent pineal gland contains DMT. There are new data coming out, hopefully this year, regarding brain levels of DMT in the dying rodent brain, both with and without a pineal gland.

We don’t yet know whether or not levels of DMT activity rise in conditions where DMT-like phenomenon occur; e.g., meditation, fasting, and so on. To the extent that various syndromes resemble those that occur after being administered DMT, it makes sense there is a common biology. Stress may raise rodent brain levels of DMT, and dying is a stress; the release of stress-related compounds, like adrenaline, may possibly mediate DMT elevations, if indeed those elevations are found.

DMT appears to protect the brain against damage resulting from low oxygen levels. Thus, the near-death state may be a trigger for DMT release, vis-à-vis these neuroprotective properties. This raises the question: Why does DMT have psychedelic effects? Why doesn’t it simply produce a sense of blackness, calm, or other nondescript states? This is where my theory enters regarding DMT’s role in the “spiritual” properties of the dying state.

The near-death experience and a DMT experience sometimes show similarities. Can you tell me more about your own personal experiences in these areas?
I’ve had a two out-of-body experiences, both in situations of inordinate stress. Once in the setting of breaking up with my college girlfriend in her dorm room. Once when lying on the couch in my little New York City apartment in medical school after a thoroughly exhausting day.

I had a brush with death a few years ago. I had pneumonia and was in the hospital. Over the space of several hours one morning, my oxygen levels and heart rate dropped and dropped, but the staff were occupied with other patients. While I was fading, I noticed that there was nothing psychedelic occurring. Rather, it felt as if the volume controls of my life, its reality, were becoming progressively dimmer. My life force was seeping away, but it was a rather banal affair. I climbed out of the bed and began walking around the ward as quickly and vigorously as I could. This was a turning point in recovery.

“The near-death state only describes near-death, not death itself. Once the body is dead, we have no idea what follows.”

Did these experiences change your outlook on life and death?
The experience in the hospital in some ways confirmed my beliefs about death. In other words, when we die we just die, whatever that is. As Dogen said, “Life and death are simply moments in time.” The corollary of that has to do with life, and how one lives it. I consider every day since that illness to be a reprieve and I wish to make the most of it. So, the idea of a legacy has taken on new meaning.

Do you think a DMT trip might help people transcend their fear of death? Should we integrate it as an official therapeutic drug into our society?
That’s a hard question. If DMT is involved in the dying process, and mediates some of the features of the near-death state, it makes sense to see if giving DMT while alive might provide a dry-run for the real thing, some preparation: “This is what it’s like as you’re dying.” On the other hand, even if a pre-death DMT session were “good,” it might not be ultimately, as I previously suggested. And, DMT is not an easy drug to navigate—people might have terrifying and traumatic experiences. Then what?

I heard you are currently working on a new book, can you tell me a bit about it?
I’m working on some fiction, what I hope will be a several-volume set. The first volume is about a young man’s drug experiences. I’m trying to conflate many of the email accounts I’ve gotten over the years – describing thousands of drug experiences – with my own life story.

Anything else you would like to share?
It’s important not to become a fundamentalist in any of this. People often assume one type of religious experience is higher or lower, better or worse, universal or particular. Death is like this, death is like that. While holy wars are part of the human legacy, it may be more useful to keep an open mind about matters that are essentially incomprehensible.