Susanne and I had been connected for a while through social media and as her posts inspired me so much, not only was I excited to meet her, but I also meant to collaborate with her in some way. Interviewing her about her path towards becoming a funeral director was the perfect thing to do. We had a lovely conversation about her own views on mortality and mourning and visited my favorite cemetery in Amsterdam, Huis te Vraag.

What does the concept of death mean to you?
Susanne: I am still meditating on that. I believe it is transition, nothing more and nothing less. And an inevitable part of life. It doesn’t scare me at all. In fact, for quite some years I found the idea of dying at a young age relieving in a way. Now that I am a mother, I prefer not to die the coming thirty years. But even if it does happen soon, I know my daughter will be strong. I believe in a resilience of life. She will be surrounded with love and she will continue her life, making it worth living. The same goes for my other loved ones.

When was the first time you were faced with mortality in your personal life?
That was probably the suicide of my kindergarten teacher. I remember it was tremendously heavy. She was a beautiful young woman, angel-like, mother of four. There was a huge ceremony I visited together with my mom and many children. Everyone was devastated. Although I didn’t yet understand the whole idea of death, let alone depression and suicide, I felt the irreversibility and disbelief. I am still very thankful to my mother for letting me experience death and funerals at a young age.

And secondly I should mention the absence of my grandfather, my mother’s father. He died about a year before I was born. I was always intrigued but also comforted at the same time by the idea that my ancestor who I hadn’t met in this life on earth, just was there somewhere. I felt connected. 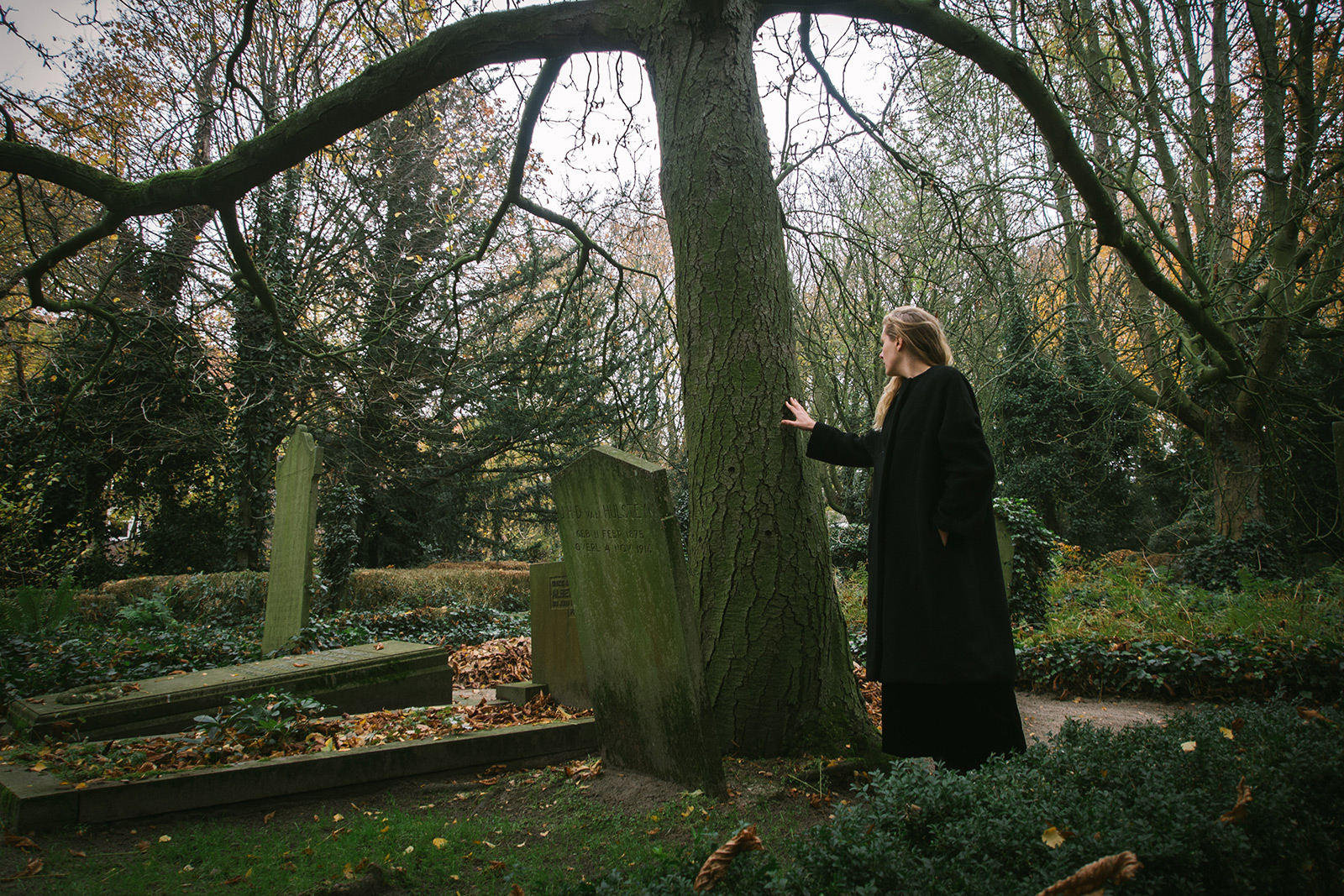 What do you think happens when we die?
I believe in energy. I believe that we first transform towards another dimension and we keep radiating for a while. Maybe as long as the people around us need to hold onto something, still need our presence, our support or guiding. When it’s time, when we are let go, I believe we reincarnate. For me, it is the most logical explanation for memories I have since childhood that weren’t from this life. Or an explanation for wisdom, old souls. I like the idea of becoming a tree eventually, in a later stage of our souls.

Have you ever been in contact with a deceased person or experienced anything paranormal?
When my other grandfather died, he seemed to hang around my grandmother for a long time. Every day a sparrow visited her, hovering in front of her window. It was comforting to my grandmother.

And one time, when I was house-sitting my uncle’s giant old mansion and talking to someone over the phone about my late grandfather, the television suddenly switched on and off by itself and the windows started rattling. I felt his presence and although it was weird, it was quite comforting actually.

This was about fifteen years ago and I never experienced anything after that. My daughter on the other hand seems to sense some disturbing energies of people in our house every now and then. Fortunately her godmother is a trained witch and she helps them leave the house or shrink when necessary. I also burn a lot of sage to cleanse the energy.

“I believe in the power of rituals, small things that make us feel the greatness of life and help us heal.”

What inspired you to become a funeral director?
I have been interested in death, nature and rites de passage since adolescence. I am fascinated by the rigid way we deal with death and loss in our Dutch culture. We seem to calvinistically or hedonistically ignore this part of life. We hardly talk about death and for instance do not feel ownership of death rituals and funeral ceremonies. Instead, when death takes place, we freeze and follow what a uniformed company representative tells us to do.

This whole disconnection to death – and thereby life itself – might have something to do with our distance to nature in general, and not internalizing the impermanence of everything in our universe.

I actually woke up one morning with the inspiration of becoming a funeral director. My interest in death rituals, using my creative and organizational skills in a meaningful way, empowering families to honor and remember someone their own way, at their own pace, working on a cultural mission to bring death closer: it all adds up, the circle is complete. It feels like my calling, or at least my destiny for the coming years.

But also, using my strategic skills to change the ugly parts of the funeral industry. By ugly I don’t just mean the not-that-tasteful appearances of the industry, but in particular the unethical and polluting behind-the-scenes aspects of it. I’m determined to make a difference.

Was it easy to switch to this career from your previous job as a cooperative banker for a large Dutch bank?
It was actually quite easy, despite the golden cage of the corporate environment I worked in for eleven years. Professionally I developed really useful diplomatic and strategic skills and I was given many opportunities. But I longed for more relevance and meaning, and a change of direction in general. I wanted to get out of my comfort zone and start something entirely new, from scratch. I asked myself: ‘On what kind of life do I want to look back when I’m old?’ The answer was clear. And this entrepreneurial journey turns out to be such a gift.

“Times are changing. We are entering a new spiritual era and the subject of death will eventually no longer be taboo.” 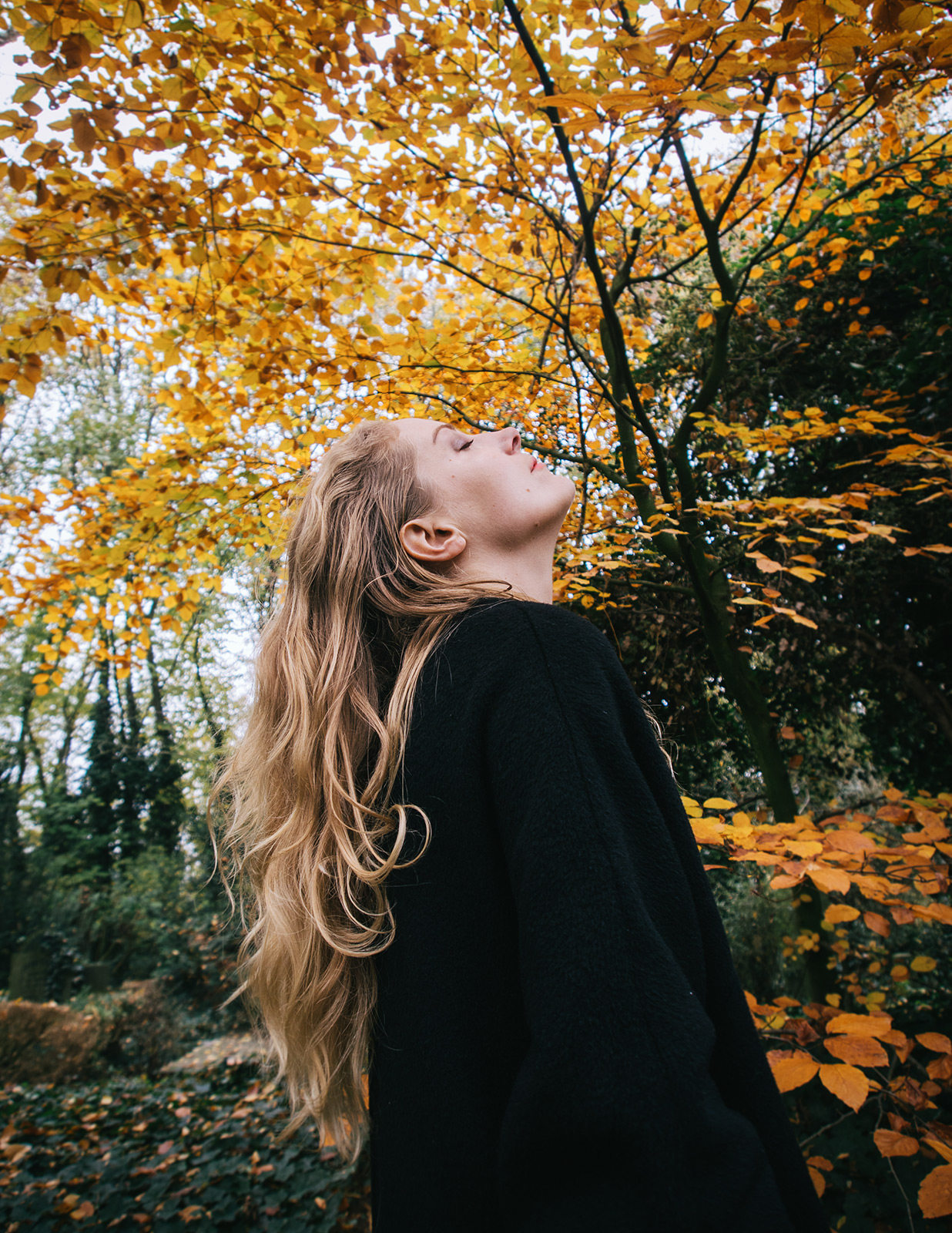 What is your favorite death ritual of any culture?
My first thought is the sky funeral tradition in the mountains of Tibet, China and Iran, being fed to scavengers. But I prefer to mention a tradition we used to have here in the Netherlands:

In many parts of our country it was custom for a bride-to-be to sew a white linen shroud for herself and for her husband. They would wear it twice: the first time was at their wedding night. Then the shrouds were put somewhere in the back of their wardrobe, to wait for the second occasion: when they were dead. I am totally in love with this idea of a beautiful personal handmade shroud, filled with love, waiting for time to come. Of course, I think this custom needs to be reintroduced. So I will be organizing make-your-own-shroud workshops very soon!

What can we improve here in the Netherlands concerning death rituals and regulations?
I notice that more and more people, in particular the younger generations, are getting interested in death and opening up about fears, loss and mourning. I really believe times are changing. We are entering a new spiritual era and death will eventually no longer be taboo.

The funeral industry however is like a self-perpetuating uniformed and protocolized system, with considerable financial interests. When an insurance company also owns locations, hearses, coffin factories etcetera, the funeral director is actually a sales agent who of course will offer you only the services and products that maximize their profit. So, the funeral industry in general is like a trap and most people aren’t aware of that. Especially those who’ve just lost someone and are devastated. Fortunately, there are more and more independent funeral directors like me, more craftsmen who can create comforting aesthetics and more ideas that inspire designing personal rituals.

I believe in the power of rituals, small things that make us feel the greatness of life and help us heal. What we can do now, is start sharing stories and inspiration about all kinds of rituals. Creating a democratic death culture and death rituals, but also involving other rites de passage, like maturity, committing to someone and becoming a mother. Gaining ownership of these rituals. In fact, organizing a funeral should be a basic life skill for everyone and not an over-professionalized and regulated job.

It would be great if more eco-friendly alternatives for cremation and burial were allowed. Like composting your body, and finally being useful to nature.

What is your most memorable experience as a funeral director so far?
The times I followed my intuition and suggested, ‘Why not try this or that?’ – hoping I didn’t say anything weird, and it turning out to be exactly what they wanted. Like this beautiful but really crazy 19th century ‘“spiegeltent” as ceremony location, and seeing the smile on the face of the man I organized the funeral for when visiting the venue together, a few days before his passing.

One other memorable experience was actually a total fuck-up. Yes, funeral directors also fuck up. A way too young, beautiful man had died. He used to be a DJ. At the day of his funeral, it was pouring rain. But the moment we stood at his grave, the rain stopped and the sun appeared through the clouds. Like magic. And when everyone started praying, something else unplanned happened. I totally forgot that it was midday at the first Monday of the month. Exactly at the same time we were praying, the test sirens of the entire city went on. All of them. That terrible noise! My inner control freak fainted. But the beautiful thing was: the sirens became a beat for their prayers. Everyone was amazed by it.

“Organizing a funeral should be a basic life skill for everyone and not an over-professionalized and regulated job.”

How do you envision your own funeral?
Of course, I often envision it. Mainly the wake and the healing rituals for my daughter. I want my body to stay at our home, on the floor, wrapped in an embroidered shroud, with enough space around me for my daughter, husband and other loved ones to sit down, light candles and be quiet, or to listen to calming music or readings. I love the idea of my daughter painting my face, and decorating my hair with tiny flowers she foraged somewhere around the house. At the funeral, the gathering of all the beautiful people in my life will be the most important thing. So there has to be good comforting food and tea or wine. I don’t care a lot about speeches, maybe only some music, poems or sweet words and written memories for my daughter. My funeral is all for her.

You can find out more about Susanne on her website and check the cemetery review I did for Huis te Vraag here.