Readers of this blog often reach out to me to tell me they appreciate the information they find on here or to share their own experiences. Some of these stories truly move me and sometimes they inspire me to share them with you in return.
I got an email from Ruben the other day, a musician from Germany who lost his seventeen year old daughter. He told me he agreed with my urge to break the taboos around the subject of death, as through the death of his daughter he experienced this taboo in his surroundings himself. Here is Ruben’s story.

Tell me a bit about your daughter. What was she like?
Ruben: Nathalie was a very straight forward and honest person. She wanted to become a lawyer. She loved being around her friends, watched weird cult movies with them and listened to hard rock music – she was a huge AC/DC fan. She was basically always herself, never felt like making compromises.

When did she become ill?
Nathalie was sixteen when the tumor in her belly was discovered. It had been there for some time, but somehow no doctors ever found it. Every now and then, since she was eight years old, she would have mild belly aches. During the time she had these belly aches her mother would try to treat it in a homeopathic way. This relieved the pain, so it was fine and nobody thought more of it.

Over the years, as the pain kept returning, we sought out all kinds of doctors. When she was fifteen I took her to the children’s hospital where she had a full body check-up. Zero results. The only thing that seemed a bit off was that one lymph node was slightly swollen. But as Nathalie had pierced her belly button a few days earlier, we thought that was just her body fighting off an infection. I tried to comfort her and even literally told her that she definitely did not have anything serious like cancer. Everything seemed completely normal.

A year later, when she had just turned sixteen, she came to me in pain again. She pointed to the spot in her lower belly where her right ovary was located. We made an appointment to see a gynacologist right away. She had a full check-up there, but again, the doctor found nothing and sent her home with some painkillers.

A few weeks after this I received a phone call from Nathalie while she was staying at her best friends house. She was crying and told me the pain had gotten extreme. I got her to the hospital immediately, thinking it was probably her appendix. They did operate on her appendix, but what the doctors then discovered was a big shock. They found a tumor the size of a child’s head, wrapped around her right ovary.

“Don’t be afraid to reach out when someone has been through a huge loss. Talk to them, give them a hug, or just be silent together. Don’t pretend like nothing happened.”

How did the treatment proceed once it was established Nathalie had cancer?
The tumor was classified as a sarcoma, or soft-tissue tumor. The reason Nathalie had so much pain was because it had started to bleed, so surgery was performed right away. After this she was transferred to another hospital. As we waited for the doctors to set up a treatment plan, me and Nathalie’s mom did some research for alternative options. Some websites even suggested the use of snake-venom. But Nathalie didn’t want anything to do with this. She wanted the regular treatment the hospital offered, so we started chemotherapy.
Less than a week into the chemo treatment Nathalie’s body collapses. She fell into a coma that lasted four weeks, during which she clinically died twice. When she did wake up finally, she was so pissed off because of what she had been through. Her first words after a 30 day sleep were “Water! And I hate you all!” This was exactly the way Nathalie was, strong and opinionated. And I loved her for that.

After she had restored from the coma, chemotherapy was applied again. More surgeries followed in the months after this and another round of chemo. In January 2016 she was declared diagnosis-free.

She revalidated and during this process we bonded in a new way, which was a beautiful experience. Although what she went through was extremely tough, Nathalie always kept her own sense of humor. She used to love watching horror movies with her friends and one time when I helped her walk, she recited a few lines from the movie ‘Hostel’. This totally freaked me out, but then we both burst out in laughter.

What happened then?
Unfortunately in March the tumor came back. She had a third operation but she never fully recovered from that. Together with the chemotherapy it took a huge toll on her body. Nathalie was well aware of this and approached the reality of the situation with a lot of courage. One day while we were on our way to get oxygen-therapy she told us, ‘Right now I just want to go to a nice place to die.’ We all fell silent.

Back home I asked her the question that I had kept to myself for a long time, ‘Aren’t your afraid to die?’ She replied that her fear of death equaled her fear of birds, which was none. I told her that I loved her and that I would not stand in her way, wherever she felt like she needed to go.

In the beginning of June, she consciously stopped eating. The three of us went for one last holiday, to a small cabin on one of the islands in the Netherlands, close to the ocean. Once we unloaded the car and sat down inside the cabin, me and her mom started crying. Nathalie looked at us and said, ‘Don’t be sad, after this is over we will meet again for sure.’

We were very scared she would die there on the island, but she didn’t. She just slept a lot. It is hard to describe the last days we spent there together. Besides all the sadness, there was a deep sense of tranquility and love that surrounded us.

Back home, on the day of summer solstice June 21, she died peacefully at her grandmother’s house, to whom she was very close. Me, her mother and grandmother were all present as it happened. We set by her bed, holding her hands, almost just like the day she was born seventeen years earlier. We were there with this beautiful soul who now had to leave her body, for whatever reason way before her time. But what do we really know about time? 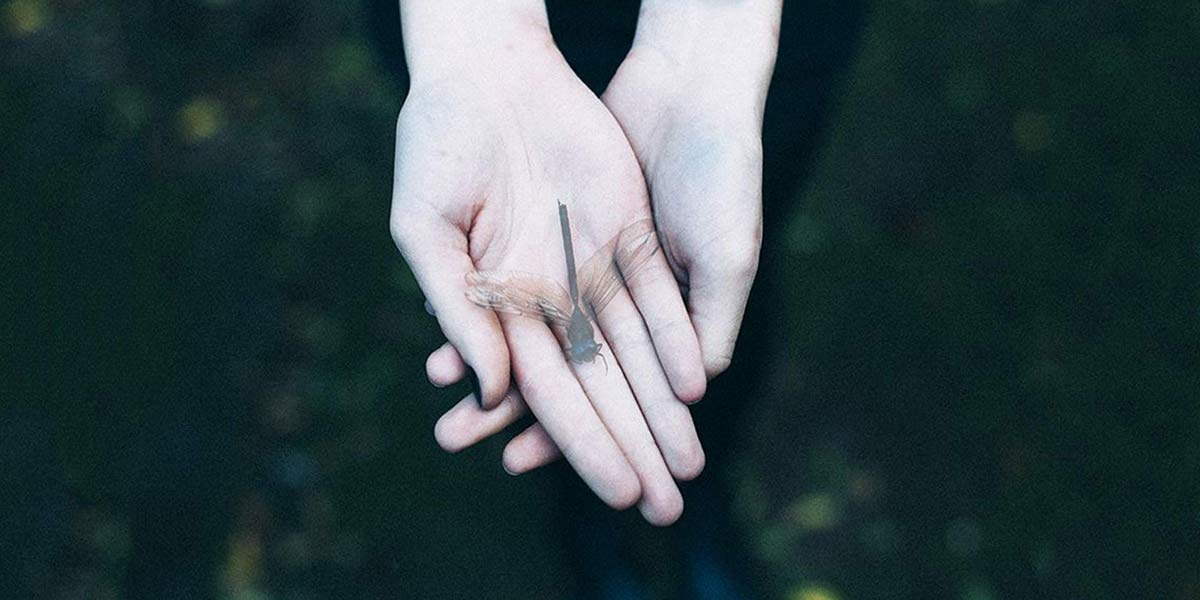 “We were there with this beautiful soul who had to leave her body, way before her time. But what do we really know about time?”

How did you process the loss of your daughter?
I think we all fell into a vacuum after Nathalie’s death, each of us into our individual one. We briefly went to therapy but I in the end I figured these studied psychiatrists were also just people and that there is no easy solution for processing grief. When you wonder what to do about it, the only true answer is you can not do anything but hold on and sit through it. Try to face it, let your emotions arise and cry when you must.

I read a quote somewhere saying that the mourning individual is like a big ship on a rough and stormy sea. The waves are the pain of the grief. ‘Go with the waves. Don’t lean against them cause if you do, you might break’. I found that incredibly touching and very helpful in my situation.

Did you get a lot of support from friends and family during that period?
Yes and no. It is good to know that you’re not alone, that there are people out there you can talk to. But sadly they get fewer as time goes by. Even very close friends sometimes don’t know how to cope with a situation like this. But those who stood by us then are the friends I am even closer to now.

A lot of people are afraid of being confronted with someone who has lost their child because they do not know what to say. The truth is there is nothing you can say or do that is ultimately right or wrong. My advise to anyone would be to just say how you feel. Say what you think. And if you don’t know how to put words to it, simply say that you don’t know. Don’t be afraid to reach out when someone you know has been through a huge loss. Talk to them, give them a hug, or just be silent together. But don’t exclude them. Don’t pretend like nothing happened.

We all die and will all be faced with a similar situation at some point in our lives. Nobody wants to be left alone when that happens.

“This is their death. It is their journey. It is not yours, although you play an important role in it. Act humble and listen to your child’s needs.”

Is there any advice you can give to parents who are going through the loss of a child?
This is difficult, as each situation and each person individually is so different. But these are my personal insights, perhaps they might help someone.

My advice for parents with children who face death:

My advice for parents who cope with the grief of losing a child:

Out of the whole experience, was is the thing Nathalie’s death has taught you the most?
It mostly taught me to be aware and grateful for this unique gift we call life that we got when we were fortunate enough to be born. And to be in the moment. To live, and not be afraid. We’re all just short term guests here. There’s nothing more important than this very moment.

How would you describe your own outlook on death now?
I used to be afraid of it, like most people. I still am a little bit scared, or perhaps even excited at times, about the exact moment when the soul leaves the body. But I know I have an appointment with Nathalie and I believe she will come to pick me up when my time has come.

Death to me is a change of frequency. We all have our time here on earth and then we must leave our bodies. When I learned from Nathalie she wasn’t afraid of death, and when I witnessed her fearless approach to it, I knew that I had to let her go, that that was the right thing to do. Anything else would have complicated her process and would have been unfair to her.

I miss her immensely and whenever something reminds me of her, I feel that hole inside myself again. But when I visit her grave, everything becomes peaceful again and I know that despite the disorder of her leaving, everything is in it’s right place.