Born in New York, Laurie Lipton started drawing at the young age of four. She developed her own incredibly detailed drawing technique while traveling through Europe and has since created an astonishing body of work. Through her drawings, she confronts the viewer with complex existential subjects and invites him to explore the true nature of everyday reality. I asked Laurie a few questions about her thoughts on the subject of mortality and discovered how the Mexican Day of the Dead has made a lasting impression that continues to inspire her to this day.

“I believe that the universe is much more mysterious and miraculous than our small brains can comprehend.
I know that I know nothing.” 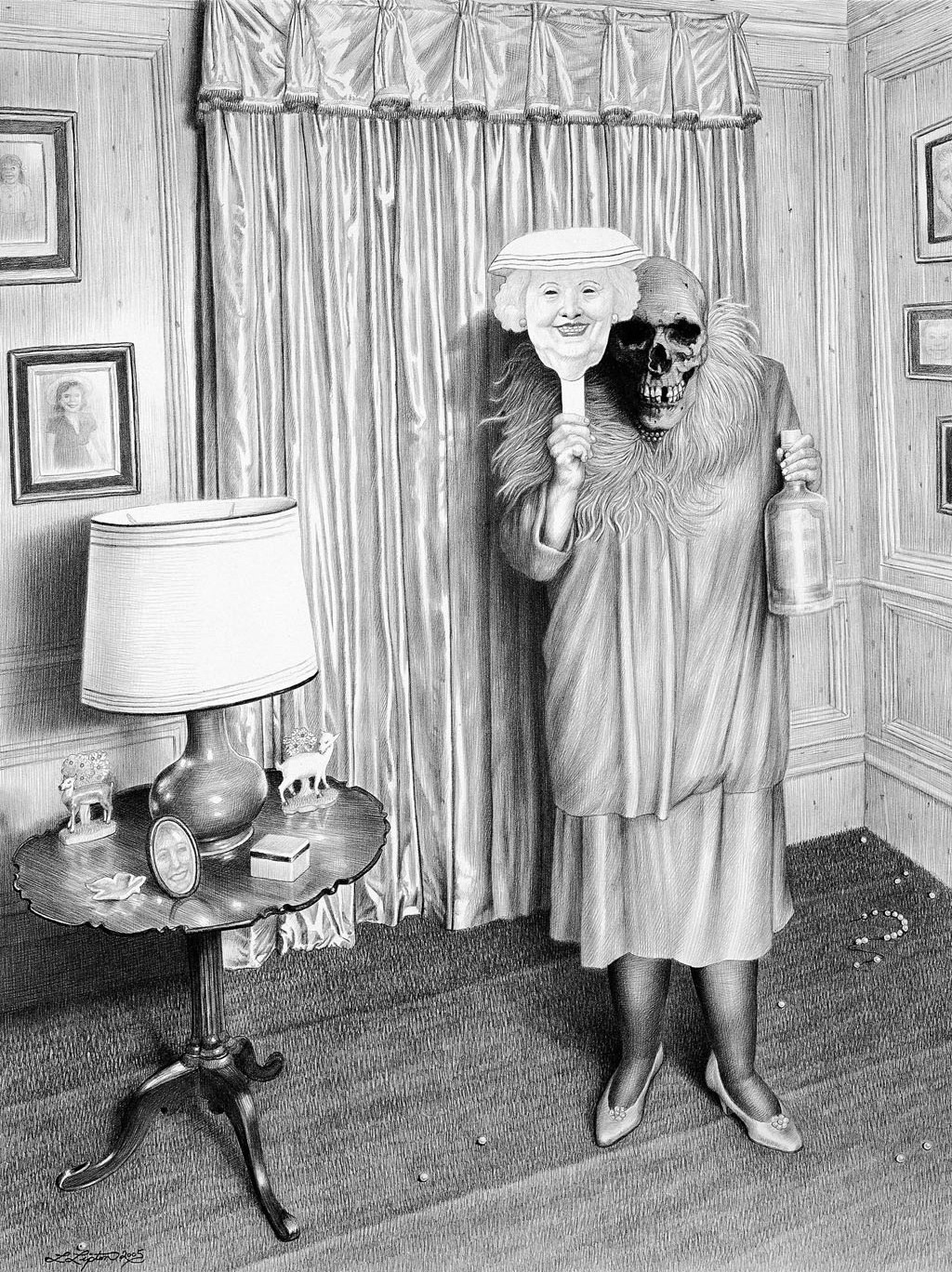 What is death to you?
Laurie: Death is an ending. It makes life and people more precious.

What are your own personal experiences with death?
I’ve lost both my parents and lots of friends to cancer. I have not been close to dying myself, but when I was 6 years old I asked my mother, “What happens when you die?” She told me that you stop existing. That night I tried to imagine not ‘being’ anymore, and I felt myself being pulled down a huge black hole until I dispersed. It was almost a mystical experience that I still remember vividly to this day.

I learned you’ve worked for The Ritman Library in Amsterdam and even recreated the incredibly beautiful Splendor Solis images. How much do spiritualism and mysticism shape your ideas about existence?
I believe that the universe is much more mysterious and miraculous than our small brains can comprehend. I know that I know nothing. I try to remain open to the wonder of existence. 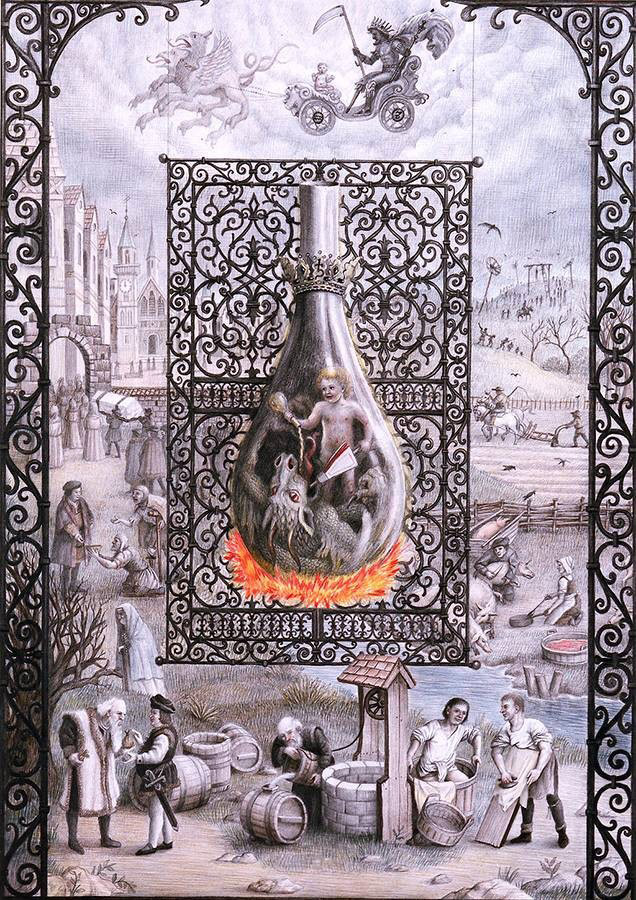 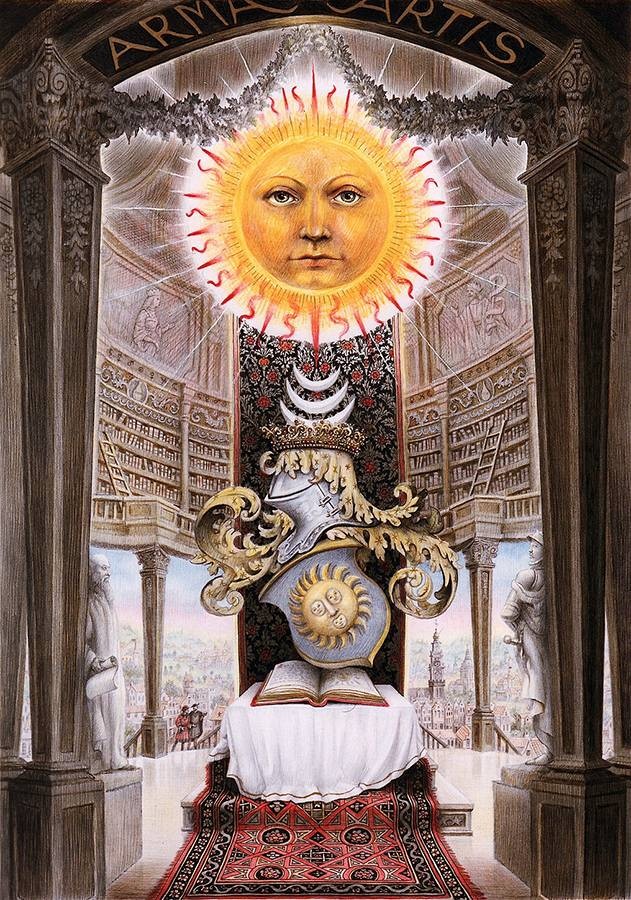 As mortality is a recurring theme in your work, can you explain how death inspires you artistically?
When my mother died I was stunned at people’s reactions. They were embarrassed and had no idea how to express themselves. They resorted to clichés and platitudes, afraid of even mentioning the word ‘death’.

Then a Spanish friend of mine took me on a trip to the Day of the Dead Festival in Mexico. I was pleasantly surprised at the open way in which the Mexicans celebrated mortality. Not only did they mention it without shame or fear, but they even made fun of it.

My society prefers to pretend it doesn’t exist: only losers grow old and die. The point of life in the West is to remain young, fit and healthy, and try to ignore the reality of death and dying. Around 2001, I decided to rebel against my culture and do an exhibition about death, based on the Mexican Festival. However, I couldn’t get it shown anywhere! Finally the Mexican Embassy agreed to sponsor it at the Cervantes Institute in London. 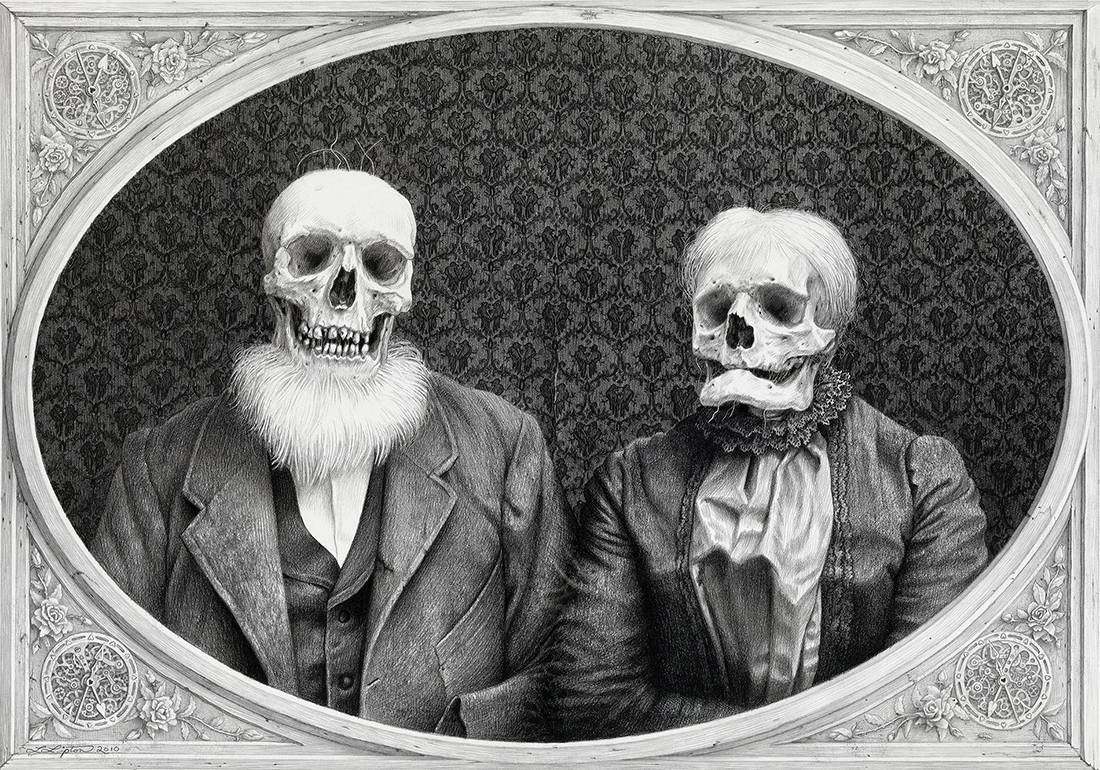 “The Umpteenth Anniversary” by Laurie Lipton, charcoal and pencil on paper, 2010

Is there a deliberate message you want to get across by confronting people with this theme through your art?
There is indeed, but if I could say it in words, I’d be a writer. Pictures are much more powerful and expressive for me than words. If you wish to know my ‘message’, then let my work speak for itself.

“I was pleasantly surprised at the open way in which the Mexicans celebrated mortality. Not only did they mention it without shame or fear, but they even made fun of it.”

Have you ever been in contact with a deceased person or experienced anything paranormal? If not, do you believe this is possible?
I have felt some kind of presence in certain houses, but if they were ghosts or entities, I have no idea. I try to remain open. There is more to reality than meets the eye. 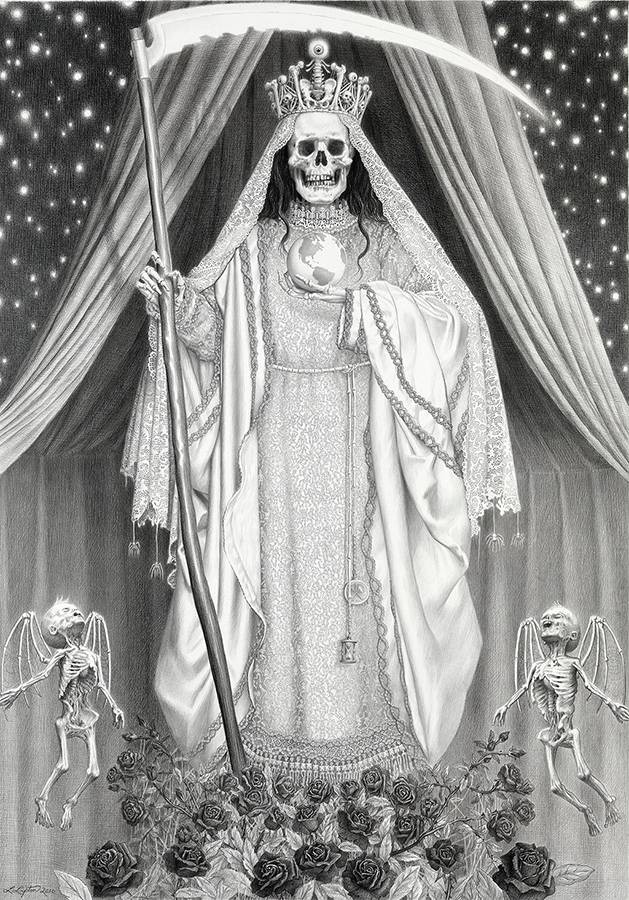 “Santa Muerte” by Laurie Lipton, charcoal and pencil on paper, 2010

Do you have any wishes for your own funeral?
I couldn’t care less. Although, if I had the money I would freeze my body in the hope that someday science will eradicate death and revive me. I want to draw another 100 years. 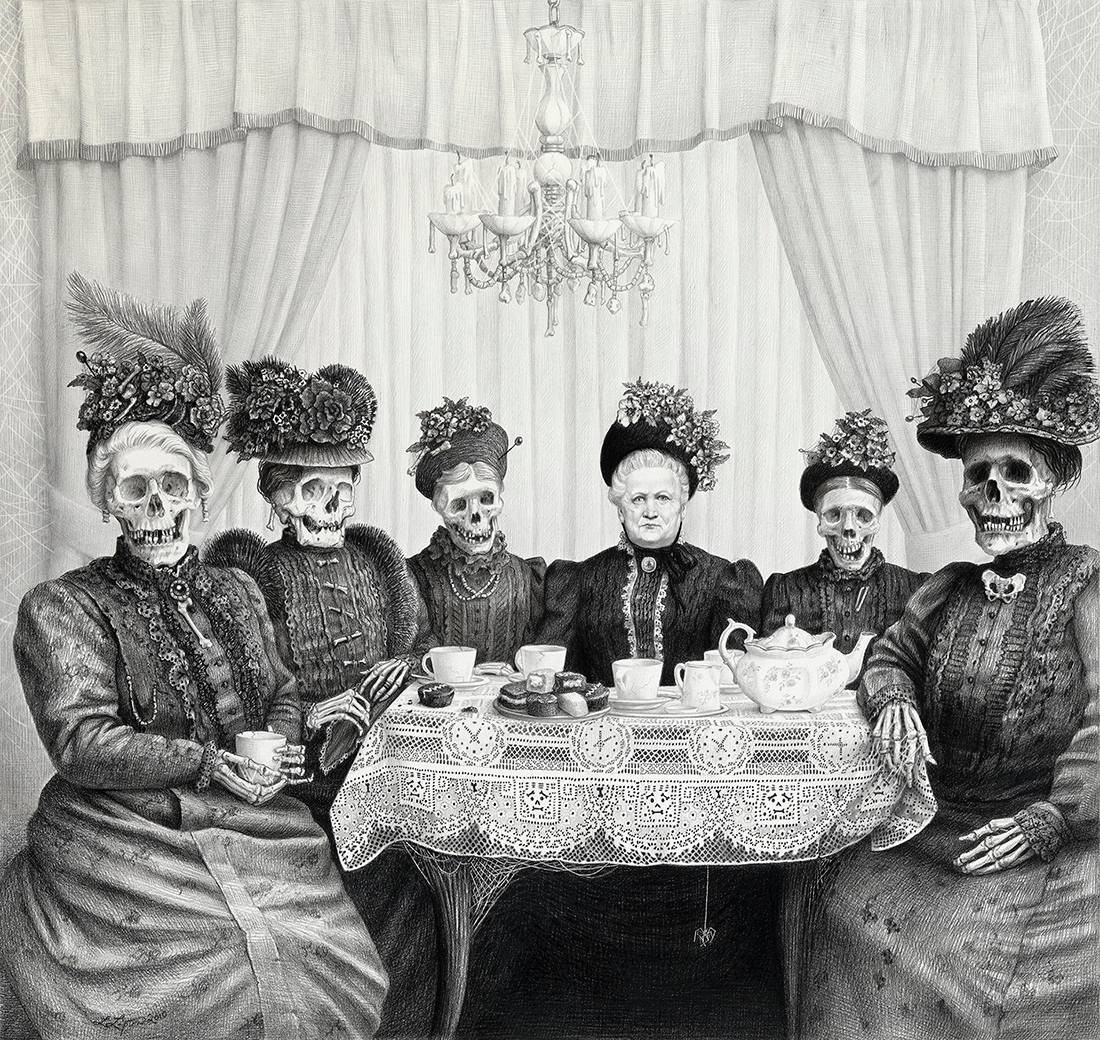 “Bone China” by Laurie Lipton, charcoal and pencil on paper, 2010 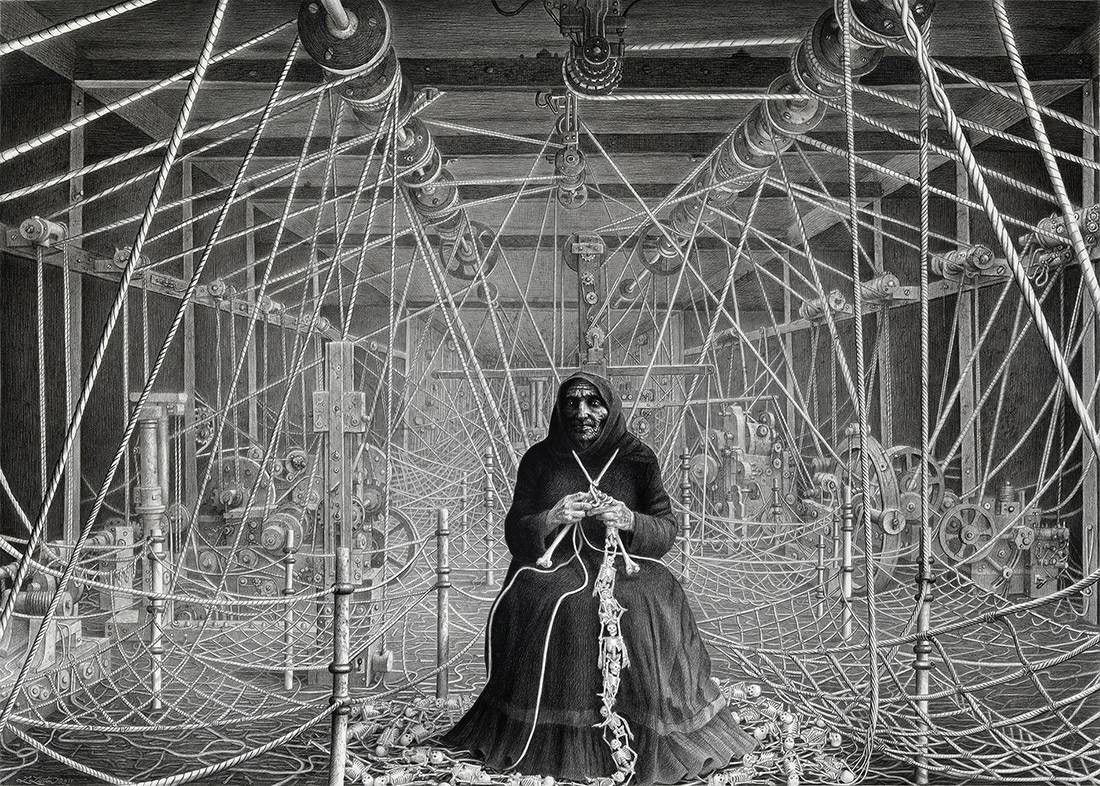 “The Knitter of Bones” by Laurie Lipton, charcoal and pencil on paper, 2011 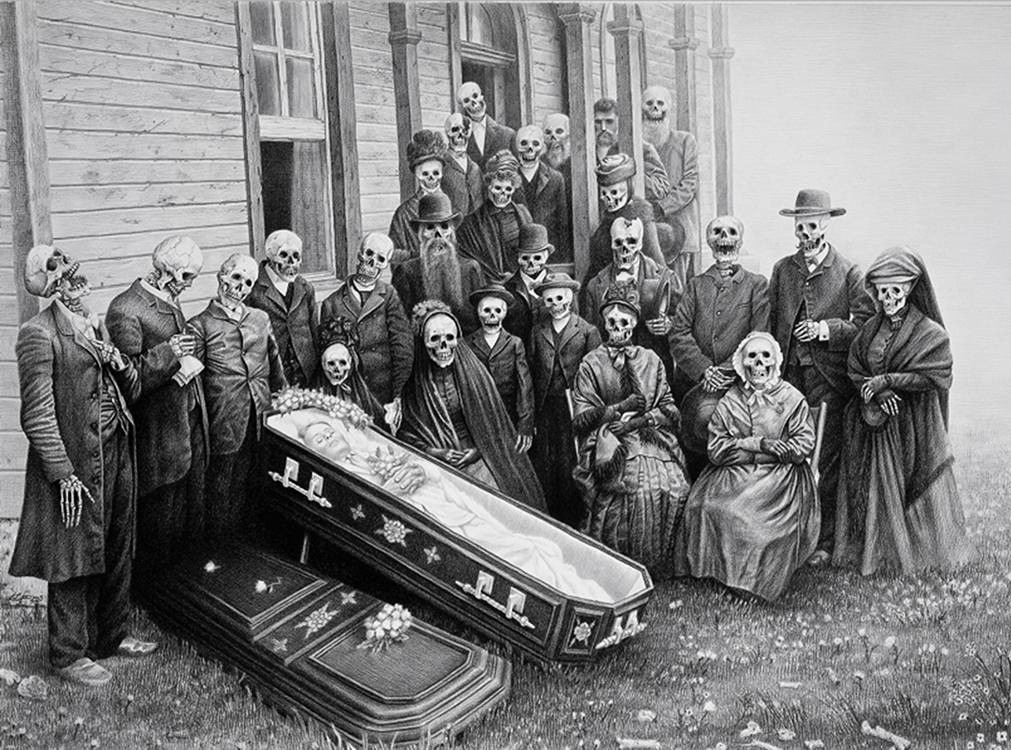 “Family Reunion” by Laurie Lipton, charcoal and pencil on paper, 2005