Publishing her exquisite collage art under the name Hidden Velvet, HV is a bit of a mystery. She wants her audience to experience her work without any biased thoughts connected to her persona and therefore chooses to remain anonymous. Living in Belgium and a mix of Italian and Polish blood, HV is an artist who intrigues to the core. She describes herself as a dreamer who prefers to be surrounded by books instead of people, and who believes in the old saying that “in order to live happily, one has to hide away from the world”. I interviewed her about her inspirations and her thoughts about the shadow side of life.

What are your experiences with death?
HV: Unfortunately, I’ve lost several family members to cancer: my grandfather, an aunt and two uncles. I have also never known my maternal grandmother. I have lost a cousin at a young age. I was still very young myself when he died, and my mother did not want me to go to his funeral. I think she decided this to protect me. She was afraid I would be traumatized by witnessing the reality of death by partaking in the ceremony. Perhaps this is where my fear of death originally stems from.

Now, as an adult, I wish I had had the chance to say so many things to them before they died. You’ll never know when death will take a loved one, so I say “I love you” to my remaining family as often as I can. 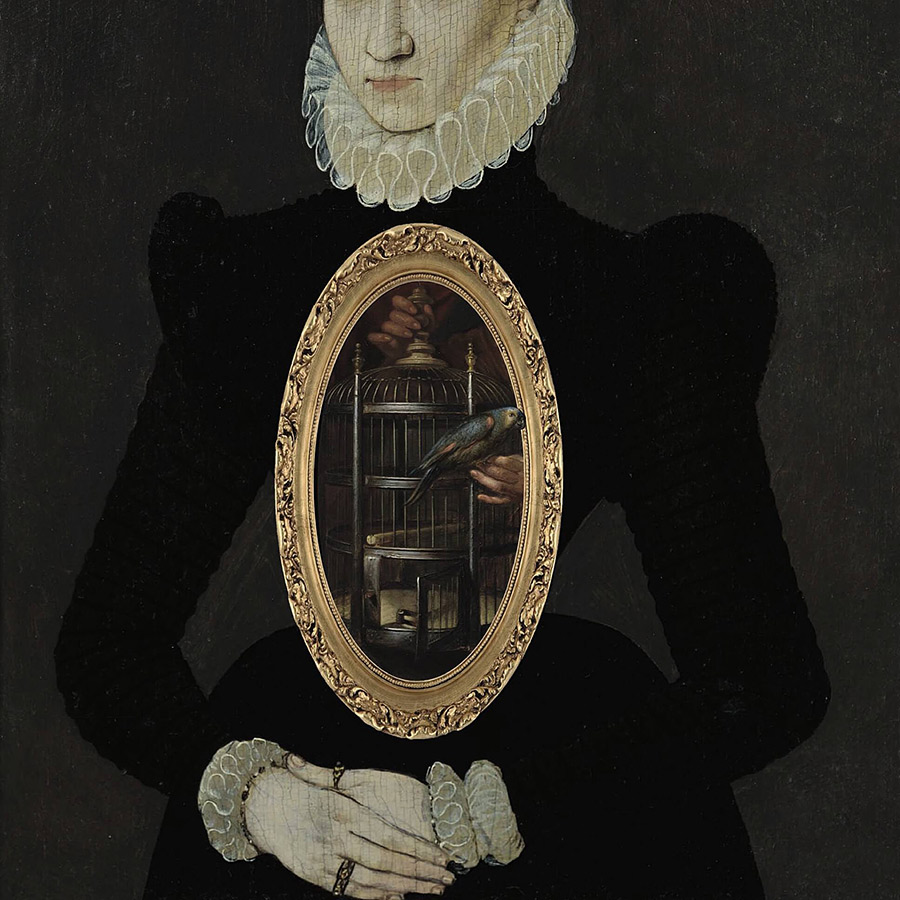 What does death mean to you?
I have been afraid of death for a very long time. I was terrified of just thinking about it, but I have learned to befriend it and put it into perspective. I like to think of the afterlife as a new experience; even as a different kind of life. The soul leaves its corporeal form to transcend itself in another place.  One life ends, and a new one begins, in a different way. I also strongly believe I will be reunited with all my relatives again, after I die.

“A few years ago, my boyfriend was diagnosed with cancer. I started doing collages, to help clear my mind, and it really worked. My experiences of life and death are intrinsically bound to my creativity.”

Have you ever been in contact with a deceased person or experienced anything paranormal?
As I mentioned above, I’ve never actually met my maternal grandmother. When I was around four years old, I was asking a lot of questions about her and wanted to build a giant ladder, to be able to go see her in heaven.

One night, something woke me up. As I opened my eyes, I saw a bright white light close to my bed. I was very afraid at first. I closed my eyes as tightly as I could and “heard” a voice. It’s hard to explain this, as she wasn’t really talking to me as in a normal conversation. It felt more like telepathy. Her voice was calm and reassuring. She told me not to be afraid. She knew I was asking a lot of questions about her, and reassured me that I would never have to worry because she would always be there for me. She took my hands in hers and I went back to sleep.

As I woke up the next morning, my hands were as she left them, in the exact same position. I knew it had been my grandmother, and I knew it wasn’t a dream. She had really visited me. I still am extremely sensitive in a paranormal way. I often feel a presence close to me, or see a black shadow from the corner of my eye. 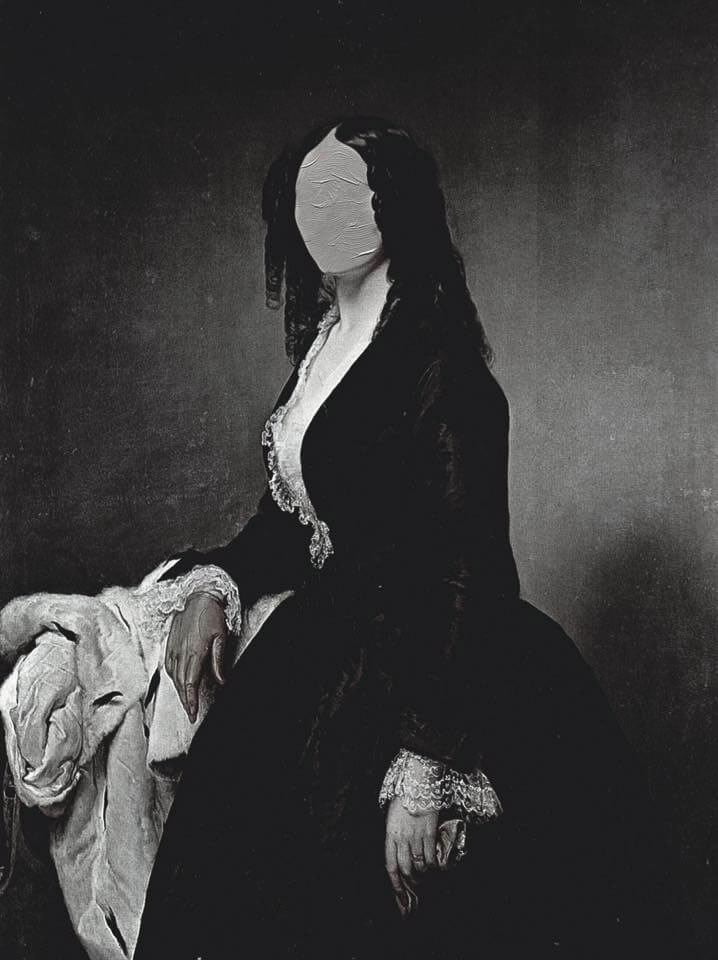 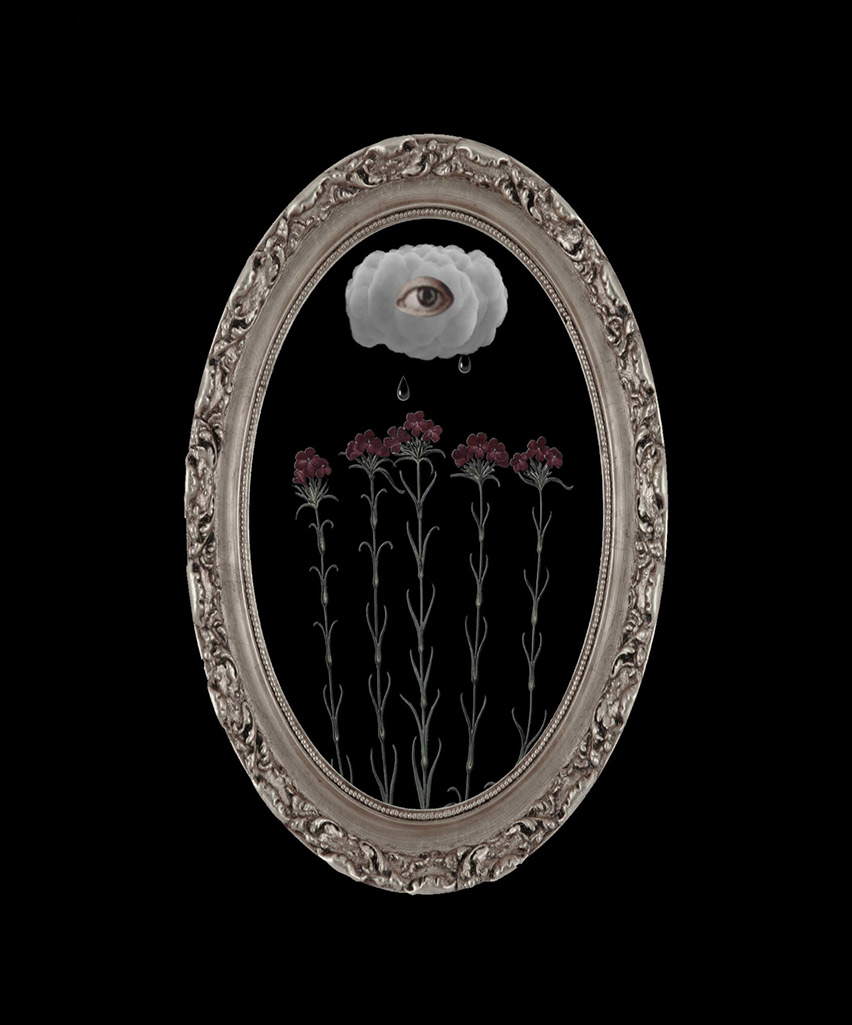 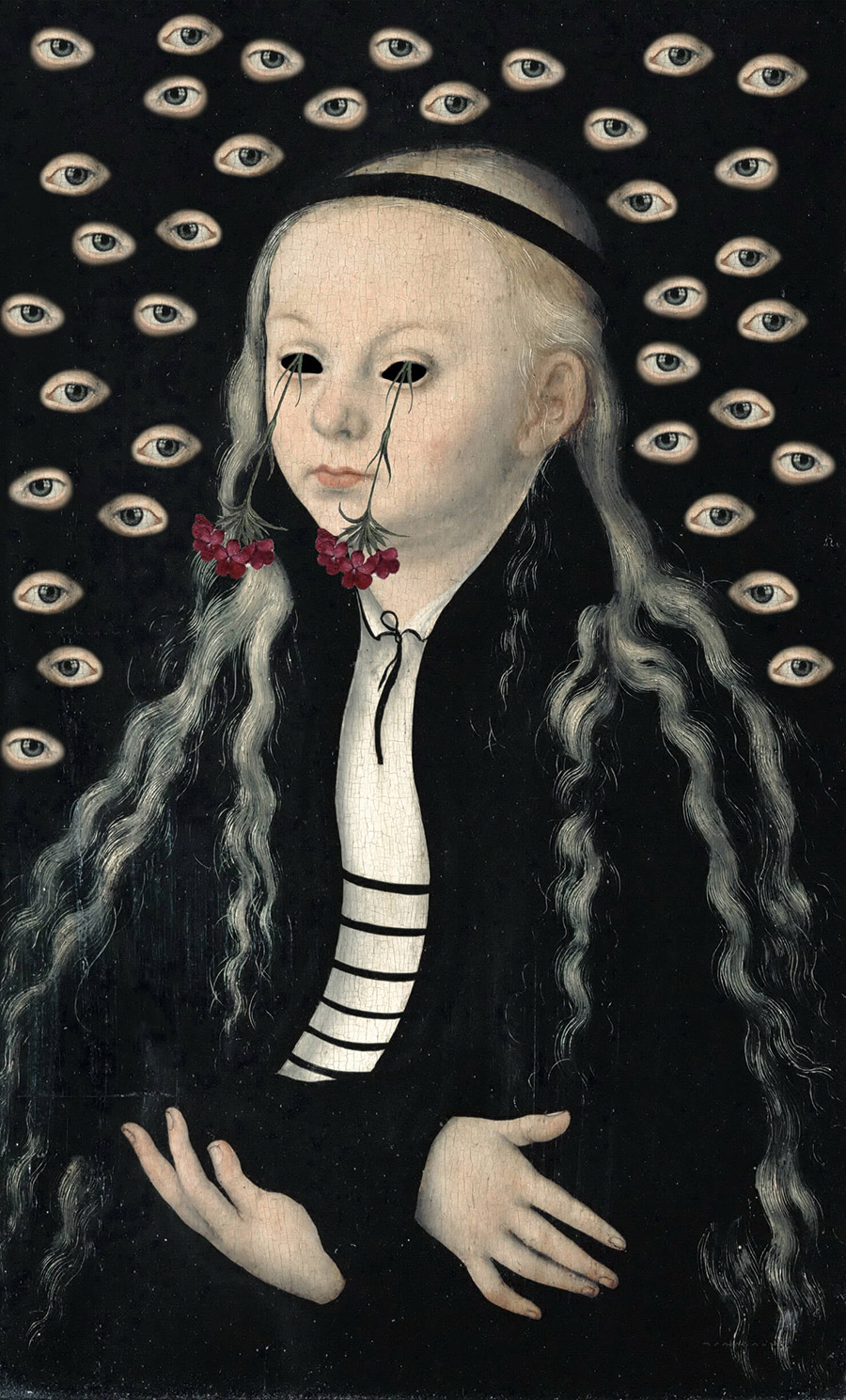 What inspired you to start making collage art?
Every art form is a source of inspiration to me. I always associate music to the image I’m working on because music inspires me greatly, and it can lead me to an unexpected direction. Sometimes I get carried away by an emotion and I let it guide me to tell my story.

My inspiration often comes when I’m half asleep. When I fall asleep my brain dissects, cuts and transforms the pictures I chose during the day and I often wake up with completely new ideas. There are no limits to this nocturnal imagination process. As I am using my feelings to create, the way I’m taking up a new collage is always different.

“I like to think of the afterlife as a new experience; even as a different kind of life. The soul leaves its corporeal form to transcend itself in another place.”

Do you feel that your thoughts about life and death inspire you artistically?
They inevitably inspire me. I put a lot of my emotions into the process of working on a collage and it is therefore a very liberating exercise. To include death in my collages has helped me to interpret it differently, and to even find beauty in it.

A few years ago, my boyfriend was diagnosed with cancer. Fortunately it was treated well. But a few months after his treatment, I collapsed. I was having panic attacks I couldn’t control, and I was suffering from depression. Having faced his possible death, it was a hard time for me.

One day, I started doing collages, to help clear my mind, and it really worked. My experiences of life and death are intrinsically bound to my creativity.

How do you envision your own funeral?
Oh, I haven’t made up my mind yet… 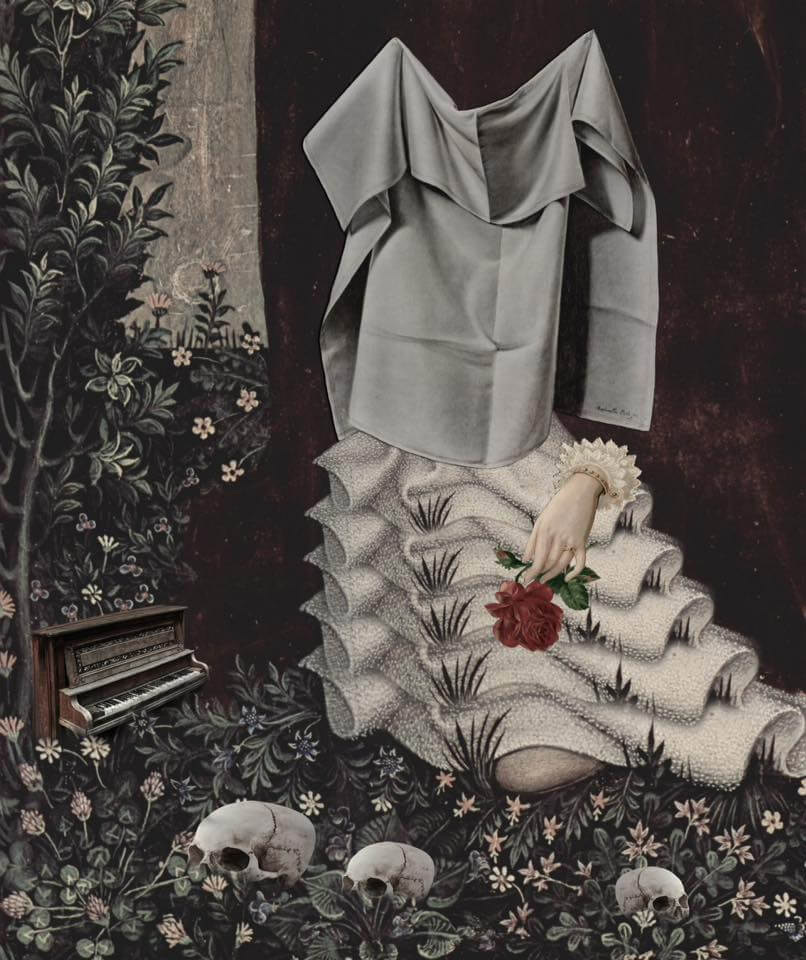 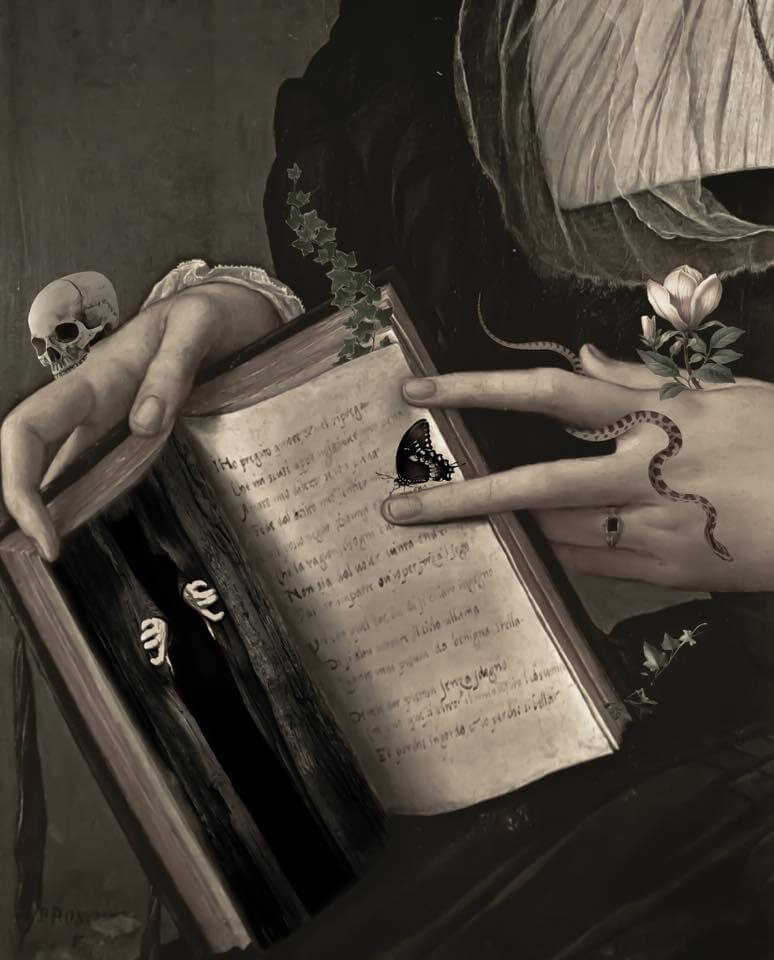