Through her detailed drawings and paintings which contain a strong narrative element, Elisa Pesapane (1979) gives expression to the subjects that most inspire her. With references to the world of literature, she creates images that have a deep personal resonance. I had a humbling conversation with her about her two stillborn daughters, processing these experiences through creativity, and the idea behind her stunning Danse Macabre drawings.

What are your thoughts and beliefs on the subject of death? What is death to you?
Elisa: Death is a part of life. It emphazises one of the beauties of it: our memories, the stories we all write just by living life. But just as in a book, at a certain point you reach the last page.

What are your own personal experiences with death?
In the summer of 2012, I gave birth to my twin daughters who died during pregnancy. My father died six months later, and shortly after that one of my Masters in the Arts died. Within a year’s time I had to cope with loss in all the departments of life that mattered to me.

Personally I’m not afraid of death. But from time to time I can worry about my own deterioration, of being incapable at a certain point to look after my sons or my mother – to whom I am particularly attached. 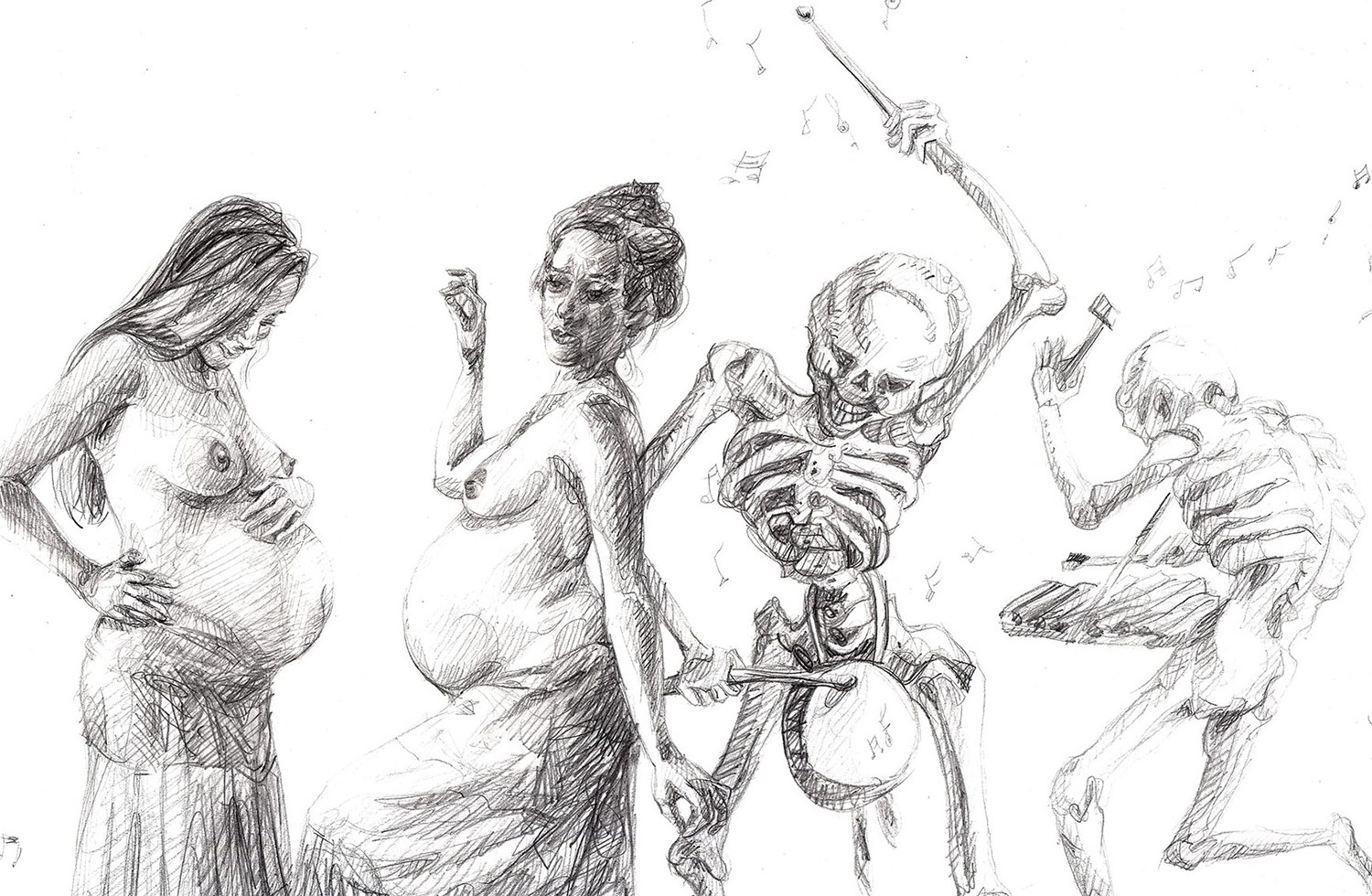 How have these experiences influenced your life or the way you perceive it?
Next to drowning, giving birth to a dead child was always one of my biggest fears. So the birth of my daughters was very formative. It was a high risk pregnancy that could go wrong any day. This meant I had a ticking time bomb inside my belly, that I somehow had to deal with.

When they died, and the birth had to be induced, the hospital staff ‘forgot’ me. I was lying in a room for a few hours waiting for someone to come by to take amniotic fluid samples for the amniocentesis. When they finally came, the trainee who was going to get the fluid sample made a mistake and stuck the needle through my belly right into the head of one of my daughters. On the ultrasound screen you could see the baby wobbling like a fish on a hook and bouncing up against her sister, because of the trainee trying to pull the needle out of the baby’s head.  None of all the doctors present said a word. When the trainee finally managed to yank the needle out, they all silently left the room.

During all the waiting, I gazed out of the 7th story hospital window. I watched seagulls fly by in the distance. It was a beautiful summer’s day in July, and I thought of Dante’s description of Purgatory.

“My Danse Macabre does not ask for pity, on the contrary. One is allowed to chuckle while looking at it. Life and death go hand in hand. I prefer seeing it as a dance of life, rather than a dance of death.”

Being confronted with your biggest fear changes you. These experiences made me aware that you have to be able to say goodbye. A goodbye is not always a negative thing.  Even if it makes you feel sad.

Did you conduct any special ritual in order to mourn the loss of your two daughters? How did you process your grief?
All my tangible memories of them – such as photographs, prints of their hands and feet, certificates and two little white lace dresses I had bought for them – are kept in a wooden box, which I decorated with elements of nature. On the inside there is a bright blue sky with a flock of swallows flying by, on the outside a sea filled with fish and a garden full of flowers, fruits and animals. On the bottom there is a starry night sky with stars painted with gold-leaf paint. The decorations are inspired by the illuminated manuscripts from the Early Modern period. I didn’t have the opportunity to teach my daughters about the world, so I painted the world for them.

Has your perception of mortality and death changed over the course of your life?
My background is Italian and Catholic. Not in a strict, but more in a playful way. When I was a child my mother used to show me images of frescos and paintings of hell and the devils that populate it, for fun and laughter. The grotesque of it has intrigued me ever since.

With a Dutch father, born in 1930, who had experienced the Second World War very vividly (also because of his father’s active role in the resistance movement) and an Italian grandfather (colonel in the Italian army, deported because of his work for the resistance movement) who was a concentration camp survivor, I grew up surrounded by stories about WWII. My first real concrete image of death were the Nazis. It became clear to me that one should always be aware that the possibility exists that one’s seemingly safe environment can be invaded by a force that threatens one’s freedom in every way. This taught me that flexibility is of great importance. Flexibility helped me make sense of my losses, by turning them into something constructive instead of letting the sadness deconstruct me.

Your triptych “Danse Macabre” inspired by the work of Hans Holbein is especially powerful because of the contrast of the explicitly pregnant women. Can you tell me more about the meaning behind this stark duality of life and death?
The evening before I gave birth to my oldest son, it occurred to me that I wouldn’t always have the luxury of having a such heavily pregnant model around every day. So I dragged myself to my studio and started taking all kinds of pictures, not yet knowing what I would use them for or which story I wanted to tell. Three years later, shortly after my youngest son was born and while browsing Holbein’s woodcuts, the image of Holbein’s skeletons inviting a woman about to give birth for a dance flashed before my eyes. I had found the way to depict the closeness between life and death.

A few years ago at an exhibition of mine, an art dealer who lost his only child in a traffic accident was heavily moved by it and wanted to console me and share grief over whiskey. Receiving this kind of was sympathy was however never my goal. My Danse Macabre is not an act of asking for pity, on the contrary. One is also allowed to chuckle while looking at it. Life and death go hand in hand. I prefer seeing it as a dance of life, rather than a dance of death.

As mortality is a recurrent theme in your work, can you explain how it inspires you artistically?
In front of the basilica of Clusone, a small town in the province of Bergamo in the north of Italy, is the Oratory of Disciplini that has a fresco of a Triumph of Death and a Danse Macabre on the facade, originating from the 15th century. This has been a strong image for me as long as I can remember. My parents, who wed in Clusone, used to take me there each summer. I always wanted to do something with it. After rubbing shoulders with death for a certain period I felt as if I had something to contribute tot the genre without just using its ‘prestige’ as an important subject in art history. In a few years from now I would like to make an exhibition around the theme of death. It is a subject with the great array of emotions attached to it. I am interested in life and its stories, which is not to be mistaken for a morbid interest.

Have you ever been in contact with a deceased person or experienced anything paranormal? If not, do you believe this is possible?
Feeling someone’s ‘presence’ to me is more an emotion, a sign that you are thinking of them rather than calling it a paranormal experience. But then again, you should never exclude anything in life. The closest to such a thing was when my father died in my arms, back in 2012. As he was lying unconscious in his bed, gasping for breath, I could not stand it anymore and yelled at him angrily that he didn’t need to stay with with me, that he should be looking after my daughters, where ever that may be. He took a few more deep breaths and then he died. My first thought was that this place, his body, where my life had begun, had ceased to exist.

These days, when my two young sons are afraid of thunder and lightning, I tell them that their grandfather is repairing his Mercedes up on the clouds and that their sisters in the back seat are yelling that he has to hurry up. As far as any thoughts on the afterlife… I like to stick to the image of that.

Do you have any ideas or wishes for your own funeral?
The idea that my ashes will be scattered in the Iseo lake in the Alps of the north of Italy appeals to me. It was where Chopin liked to come and compose while gazing at its waters. The area is very much tied to my family’s history and is also the place where my father’s ashes are. His wish was to grow old on its borders while smoking a cigarette. After he died we rented a little boat, chose a good spot and scattered his ashes in the lake. This was the closest we could get to executing his last wish.

My brain will remain in Amsterdam, at The Netherlands Brain Bank (NBB), a non-profit organization that collects human brain tissue from donors. Their aim is to increase our understanding of the human brain and to develop therapies for neurological and psychiatric diseases.

Anything else you would like to share?
Whenever I get melancholic because I miss someone, I like to remember these lines from the poetic sequence my grandfather loved, Xenia by Eugenio Montale. It was written after the death of Montale’s wife in 1963. In it the poet’s persona is talking about things only he and his wife had knowledge of:

We’d worked out a whistle for the world
beyond, a token of recognition.
Now I’m giving it a try, hoping
we’re all dead already and don’t know it.

This to me is beautiful image: that between all the murmur of voices that are talking simultaneously, you go on a quest to find your loved one.