Christian Fuchs (Lima, 1979) is a Peruvian artist who gives new meaning to the concept of ancestor worship. Through his photography, he transforms himself into his relatives by creating self-portraits inspired by their portraits and paintings. He brings them back from the past, using himself as both a vessel and a canvas. I spoke with Christian about his intriguing family history, his various psychic experiences and the impact of the recent death of his beloved grandmother. 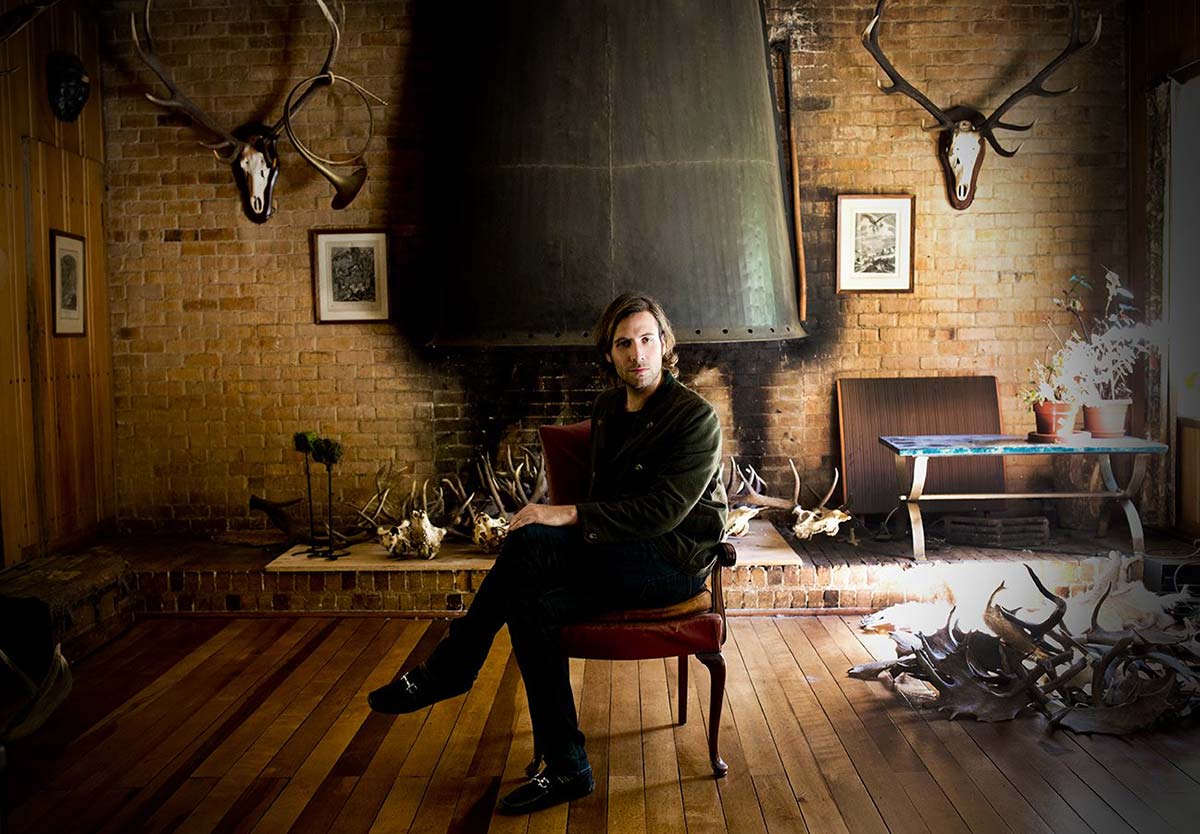 “We are born again and die many times to continue to evolve. Our energy is densified through our physical body and becomes subtle through death, over and over again.”

Do you remember the first time in your life you were faced with death?
Christian: When I was a young boy I used to play with scorpions in the garden of my grandparents’ holiday home. Once these scorpions were trapped, they killed themselves. I always arranged funerals for them. That was the first time I realized life on this planet has an end.

What does death mean to you?
I never thought death was something negative. I was just afraid that one day my grandmother, who raised me, would die. That was my biggest fear, and it happened two months ago. She always told me that after her death, she would do something to make me notice her presence. And she did: on the day of her funeral, a hummingbird flew inside the funeral home. I kept it in my hands for more than a minute. I’m sure he was a messenger she sent to tell me that she was OK. The day after the funeral I was in my apartment looking at photographs of me and her together and felt very melancholic. That very instant, a dragonfly landed on one of the photo albums and stayed there for a while, then flew away towards the sunset. I am sure this was one of her signs too because this is a very uncommon thing to happen.

Although I know death is a part of life, I believe we are never quite prepared to let loved ones go.

Physical death is just another stage in the entirety of our eternal life – this life is a parenthesis within eternity. We are born again and die again many times to continue to evolve. Our energy is densified through our physical body and becomes subtle through death, over and over again.

Did you do anything specific to mourn the loss of your grandmother?
The thing I do constantly to mourn her is play her favorite German songs from the 19th century. She used to sing them to me, songs like ‘Die Gedanken sind frei‘. I listen to them, and sing along with them.

Has your perception of mortality and death changed over the course of your life?
I’ve always had my own views on life. But these ideas were shaped with time through my personal experiences and my spiritual research. I believe there are other dimensions that we are not aware of. I remember that once when I was a teenager, I had a strong fever and was feeling really ill. I went to sleep and during my dreams, a small lady with long white hair visited me. I did not see her hands, just her face, her long white hair and feet. She smiled at me and said, “You will feel better in the morning.” The next morning I felt great, the fever was gone. 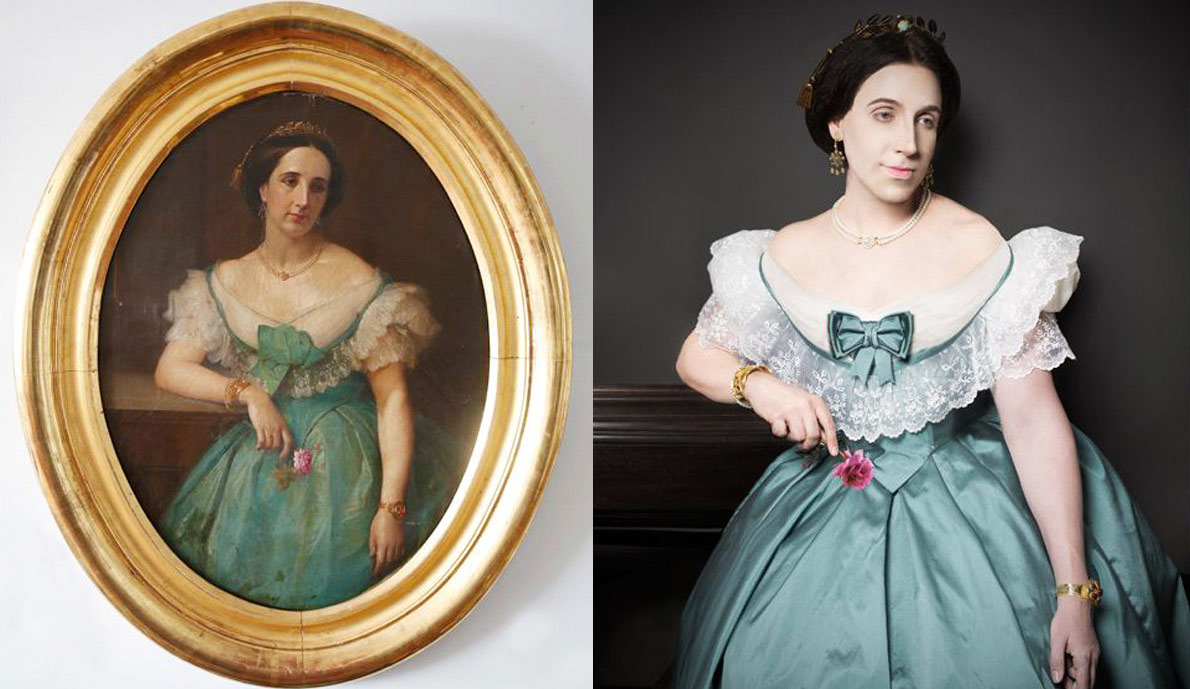 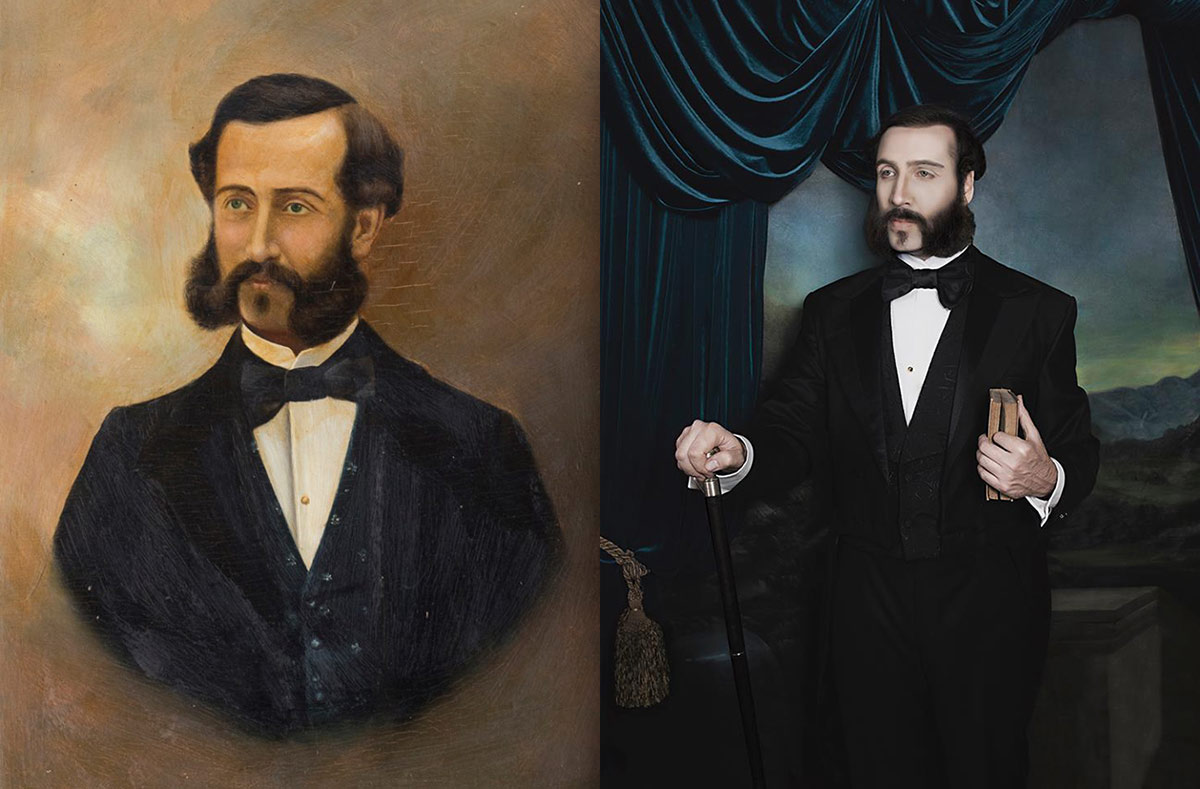 Through recreating the portraits of your ancestors, do you feel like you are connecting with them? Are you trying to reach out to them through your work?
Definitely. This is the purpose of my work: being able to connect with my ancestors. In order to do this I do my research about the characters. I figure out where they were born, what they were dedicated to, I investigate their tastes and tendencies as well as their illnesses and the cause of their death. When I am fully identified with them and have everything I need (clothes, accessories and backdrops) I am ready to “receive” the character and live the moment in which he or she was portrayed. Throughout this process I frequently have feelings and sensations they had in a certain moment. I believe this is because all the information of our ancestors is contained within our own bodies.

Have you had any paranormal experiences in this regard, like communication with the dead? If not, do you believe this is possible?
My life has been filled with paranormal experiences. For example, I remember when my grandmother’s sister died. She was a very funny woman whom I loved very much. A few days after she died I was driving in my car, listening to music, and suddenly the music started to play backwards. The next few days the lights and the microwave were turned on and off and a Saint Nicholas doll that we had kept in the closet began to sing in the middle of the night.

“I believe all the information of our ancestors is contained within our own bodies and is being passed on through our DNA.”

My mother died more than twenty years ago. She has appeared many times in dreams to give me important messages. For example, she would give me clues on how to find lost objects. And I remember a beautiful experience I had about five years ago: I was having a magnet therapy session and the healers were two old school friends of my mother. During the session I was not really sleeping, but not quite awake either. My mother appeared to me in a pale yellow dress and hugged me. It was so real: I could smell her scent almost twenty years after her death. She said: “Finally,” and hugged me. I think this happened because we never had a real chance to say goodbye.

What is the most fascinating piece of information you have found while doing research on your ancestors so far?
There are many fascinating stories in my family. It was very interesting when I discovered that Catalina de los Rios y Lisperguer “La Quintrala” – a notorious Chilean witch and landowner who was born in the beginning of the 17th century – belonged to my family. She is a very famous character in Chilean colonial history and there are many myths involving her. Another character I love to be related to is Dorothea Viehmann. She was the sister of my sixth great-grandmother, Anna Sabine Pierson. Dorothea was one of the main sources of inspiration for the Grimm Brothers. She told them more than forty stories for their second volume. Johann Wolfgang von Goethe is another relative whom I was very happy to discover. 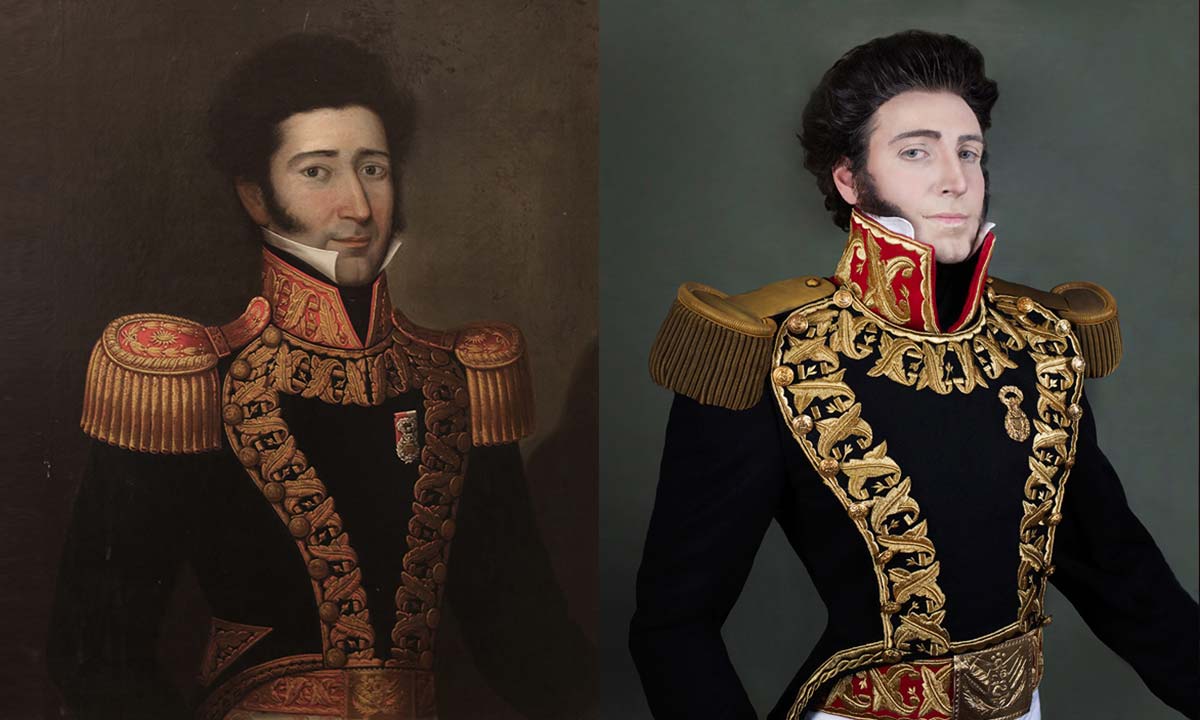 Do you feel like you are getting to know yourself better by learning more about the lives of your ancestors?
Absolutely, because we all have our family tree integrated within ourselves. By knowing them better, we know ourselves better. The experiences of our ancestors generate changes in the DNA and this is transmitted to us throughout the generations.

In certain cultures people believe that by taking a photo, you literally capture a person’s soul. Do you ever experience this in a similar way in your work? How does this manifest, as you transform yourself into different personas?
True, this is a common belief in many cultures. From the moment I start thinking of my ancestors it’s as if I am bringing them forth again from the past. It’s like opening a door to the past, to a moment of their lives, which allows their energy to manifest again. This is what I capture with my photography. But I believe it doesn’t happen against their will: the soul always remains free.

Do you ever consciously think about the art you leave behind after you have died?
I would like to make people think about their past, their family, their ancestors and bring them closer to what they are. Our ancestors are something all us human beings have in common and we are the continuation of them through time.

Do you have any ideas or wishes for your own funeral?
I would like to have a funeral like the ones that were made way back in time. I would like to be put on a boat with flowers, and when I have drifted off far away someone should shoot an arrow with fire at me so that I will light up in flames and my ashes dissolve in the water.