Culinary genius Annabel de Vetten is nicknamed Annabel Lector, which you will understand is for obvious reasons once you take a look at her work. She fabricates hauntingly delicious cakes, or rather “edible sculptures”, of the darkest of themes. From creepy looking animal skulls with sweet cake on the inside, to white chocolate baby heads and extremely detailed anatomy models that taste way better than the wax originals – Annabel can do it all. I chatted with her about her part in the death positive movement and her thoughts on the subject of death.

What are your thoughts and beliefs on death and the afterlife?
Annabel: I don’t actually believe in an afterlife or in reincarnation. Death is the absolute end to me. But I do believe the memory of you lives on through your loved ones. 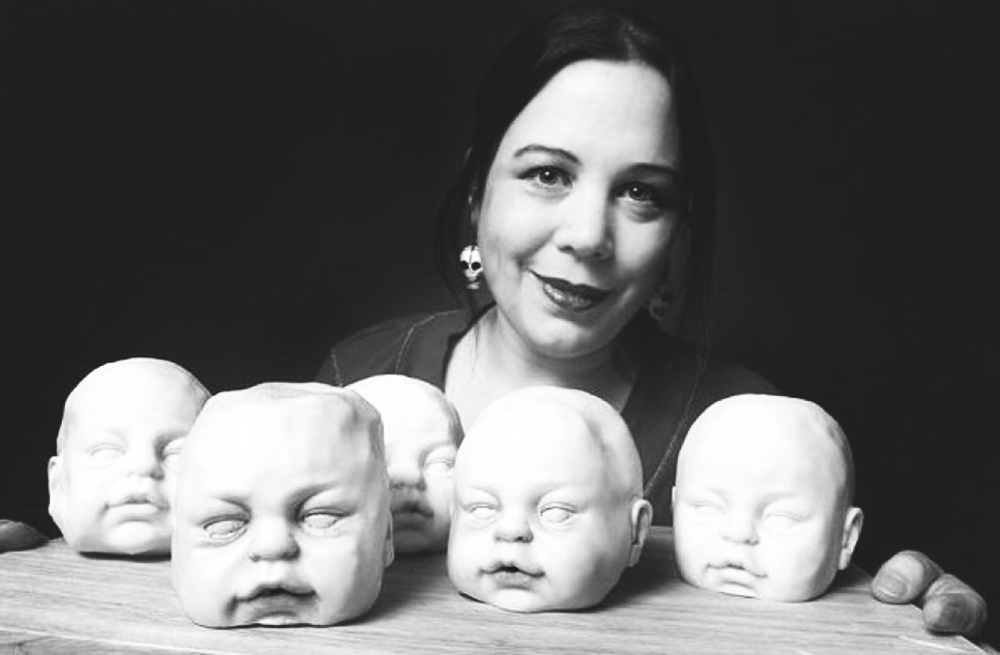 What are your own personal experiences with death? Have you lost anyone, or been close to dying yourself?
I’ve lost far too many friends over the last few years – illness, sudden death, suicide. A friend of mine died just a couple of months ago, very suddenly. It’s difficult to get your head around losing someone you don’t physically see all that often, but are in touch with online. In one of his last messages to me he included a picture (nothing rude) and jokingly said, “If you show this to anyone I will die!” Fortunately for me, I didn’t show it to anyone, otherwise I’d feel pretty bad right now. I regret not visiting him the last time I was supposed to. The more I learnt about him after he died, the worse I felt for not having spent enough time with him.

“Since I’ve become involved with the death positive community I have been sensing that my work can have the effect of confronting people with the physical reality of death.“

Through your gorgeous edible artworks, for example the white chocolate baby heads, or the anatomical human head cake, you confront people in a very vivid way with the physical reality of death. Do you feel you intentionally break some of the taboos that surround the subject of death through your work?
I did not necessarily feel that way initially. But since I’ve become involved with the death positive community I have been sensing that my work can have this effect. In a way I just do what I like, what interests me personally, and luckily I have customers who have the same interest. They seek me out specifically and often let me guide them with my own ideas, which is great for everyone! No one who is offended or shocked by my work would ever order my cakes, so I don’t have to justify my views and interests to anyone. 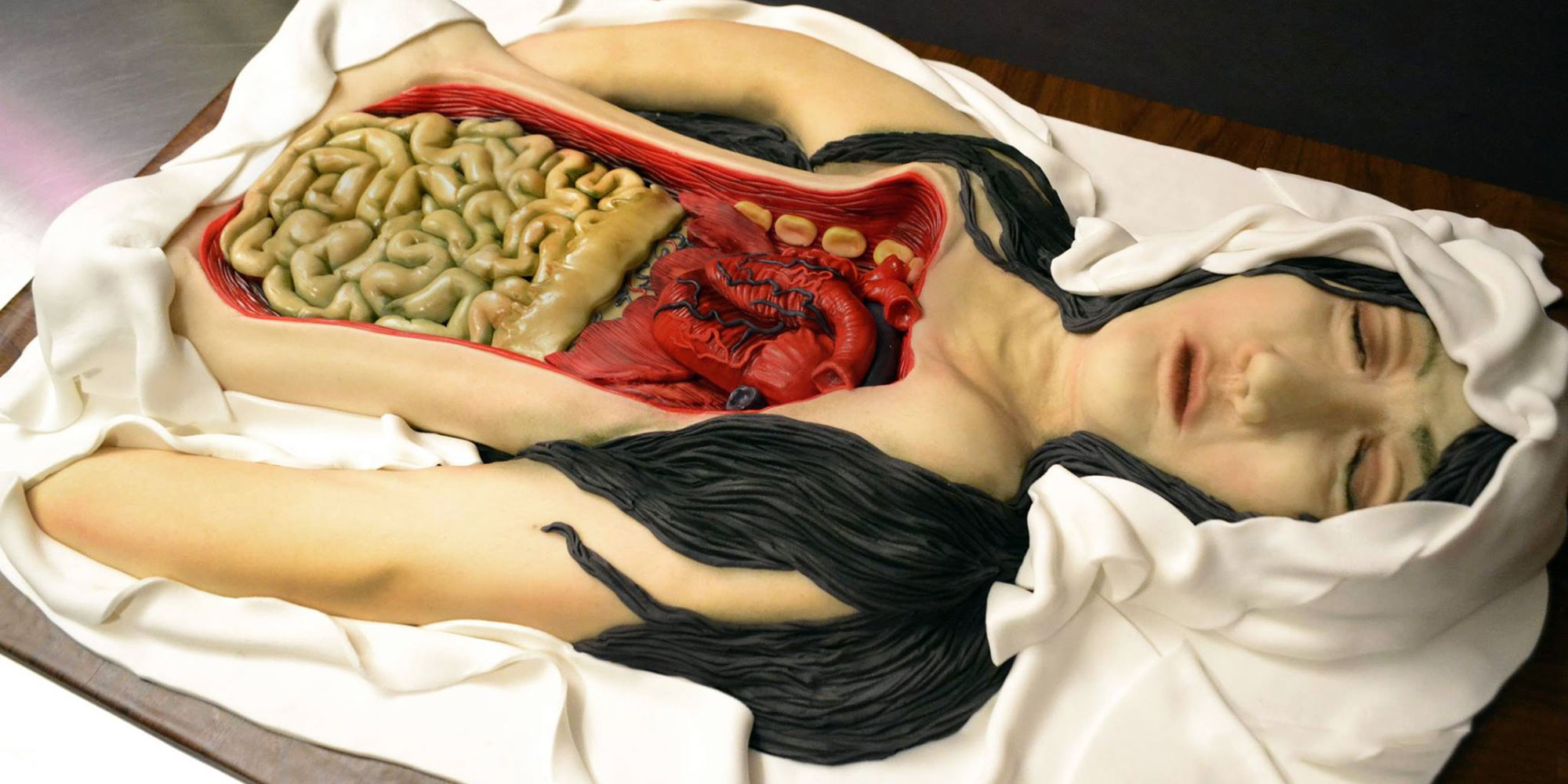 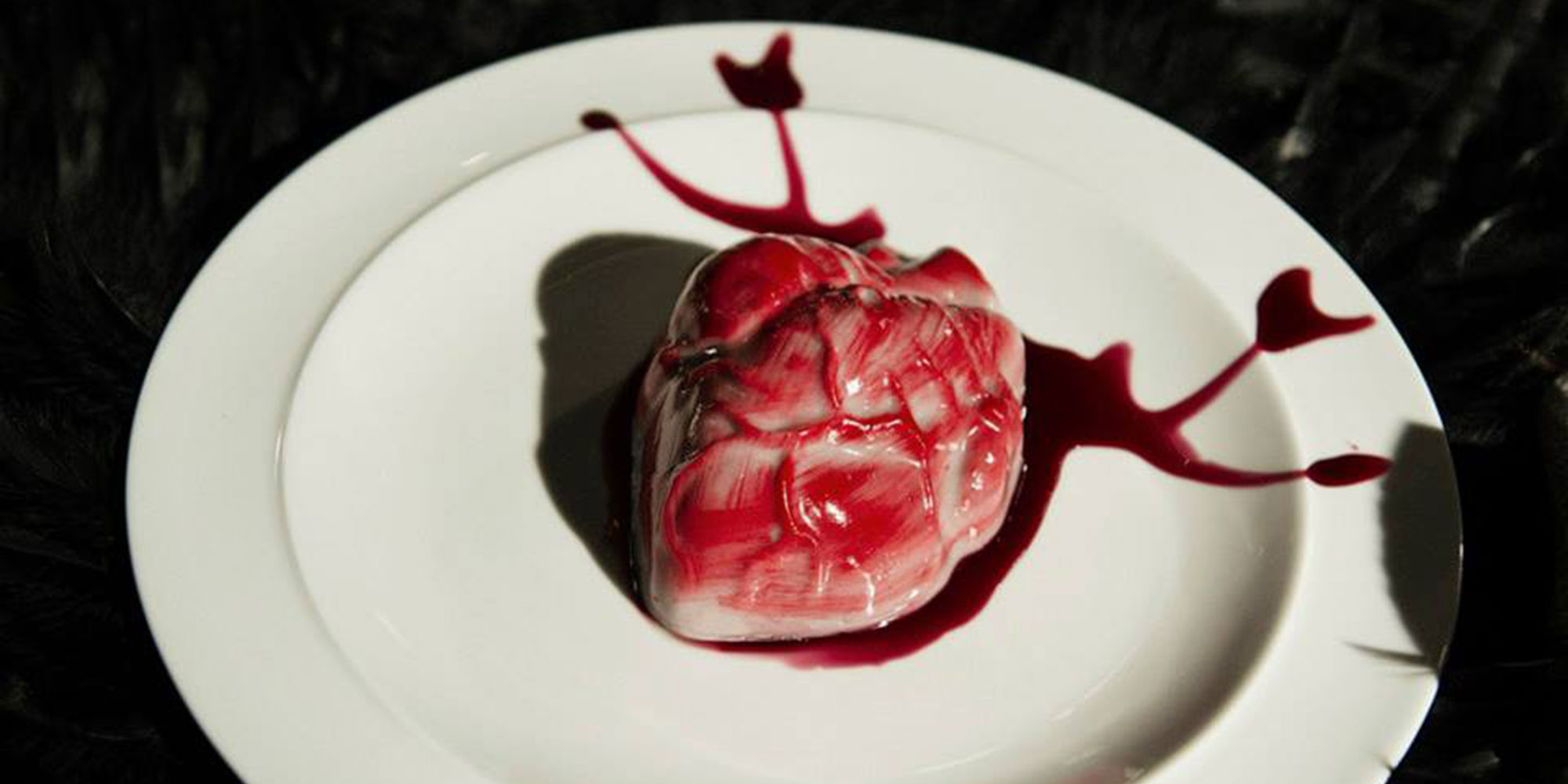 If someone would request a life sized cake of a deceased person to be served at their funeral, would you agree to doing that? Are there any limits to the type of requests you accept?
I would absolutely be into that! Unfortunately the realization of such a big project would depend on their budget. A cake like that would cost quite a lot and would take a while to make. But if that wouldn’t be an issue then I would absolutely do it. The main problem with cakes for funerals is they are fairly short notice, so if I’m booked out there’s not a lot I can do. Even if I wanted to.

There are some limits of course. I don’t like crass cakes. For example, those unpleasant baby shower cakes with a kid bursting out of a belly or vagina. They strike me as coarse and are never anatomically correct. If I were pregnant and got one of those, I would seriously have to question my relationship with that person! I don’t do genital cakes either. I mean the ones where it’s a muscled male torso with a big bulge in his pants or his penis popping out of his shorts. That’s just not for me. If I made an anatomical cake in which the genitals were showing, that would be different. Then it would be about the human body, not just for shock value. Oh, and Peppa Pig cakes. I draw the line there too. 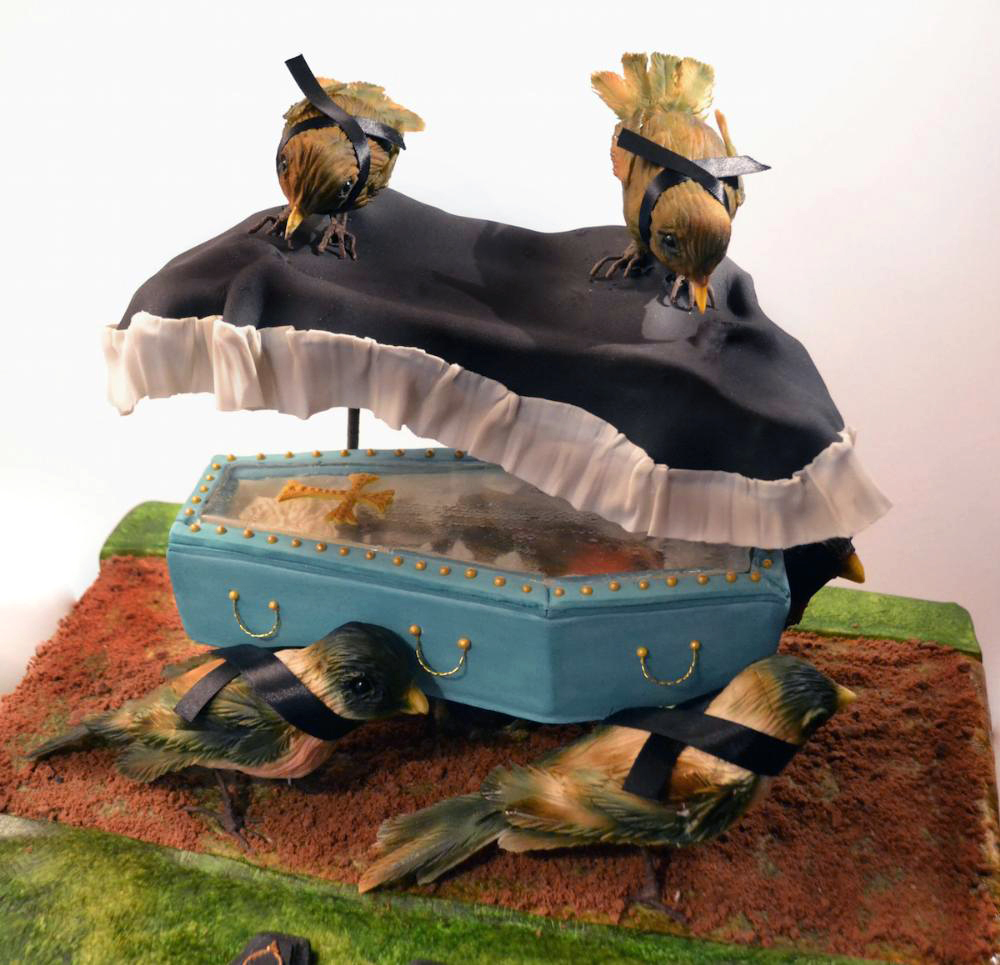 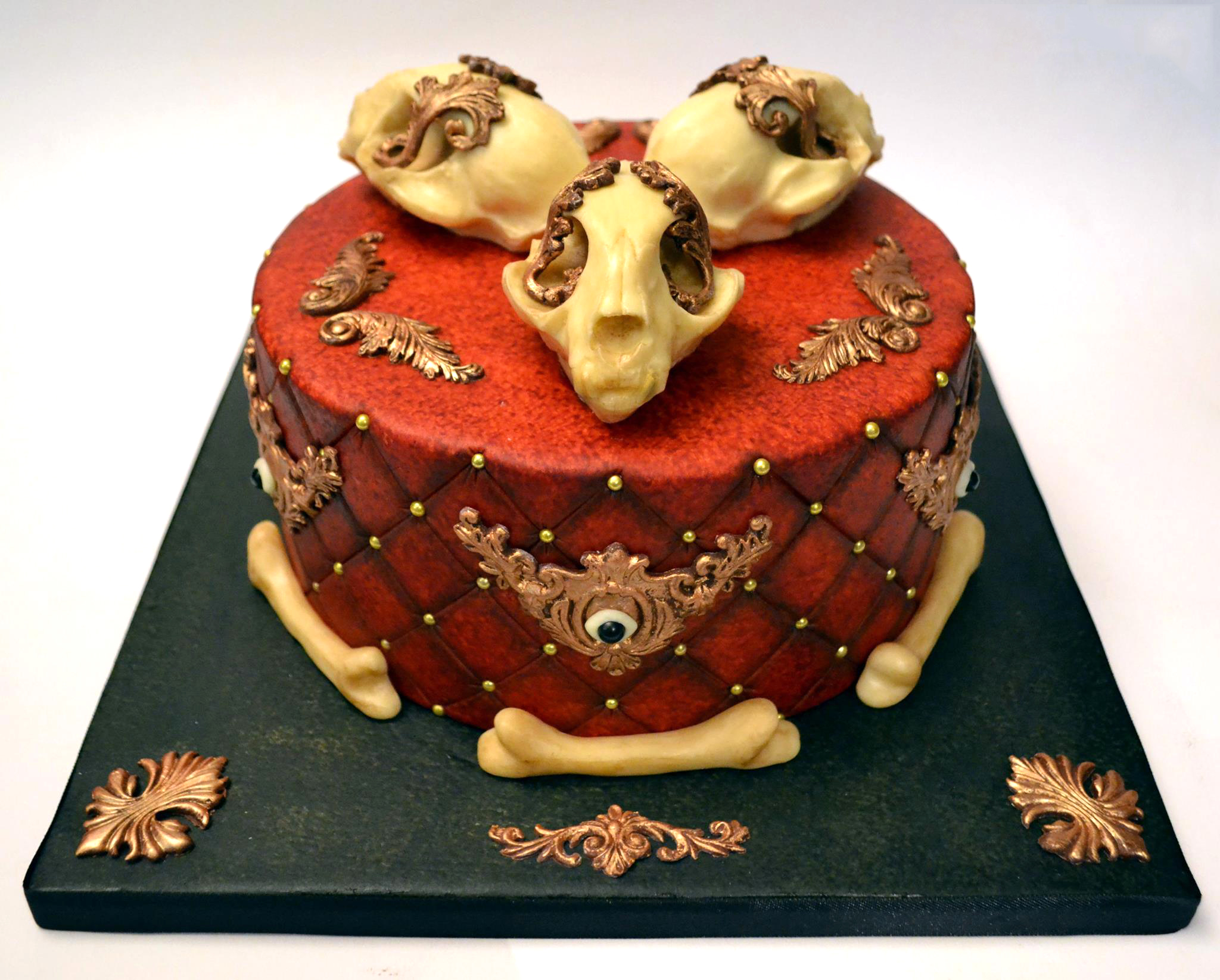 “Even though some of the pieces I make can be kept for years, they have an indefinite life span. I think this adds an element of mischief, fragility and intrigue to my work.”

What is your ultimate dream food-art project you would one day love to make?
I dread this question! There is so much that I want to do! Actually, there is a specific project I’d like to do, but I don’t really tell anyone about it. I’m waiting for the right client to pitch the idea to, or to find a sponsor to help pay for it. Apologies for being so vague, but hopefully you will find out about it in the near future.

Another thing I would like is to have an edible exhibition. With creations of my own choice. I imagine it would be fun to have a big feast at the end of the show and eat some of the art, instead of having an opening night party. Even though the pieces are edible, practically speaking, some of what I make can be kept for years. But I like that even then, they have an indefinite life span. I think this adds an element of mischief, fragility and intrigue to my work.

Do you find it easy to talk about the subject of death, apart from integrating it into your work? Is it something you can share with your friends and family?
Yes, absolutely. Death is something I can discuss with both my friends and family (which is very small). My parents have even told me their wishes for their funerals. A woodland burial. I haven’t told them what I want yet though, as they never asked. 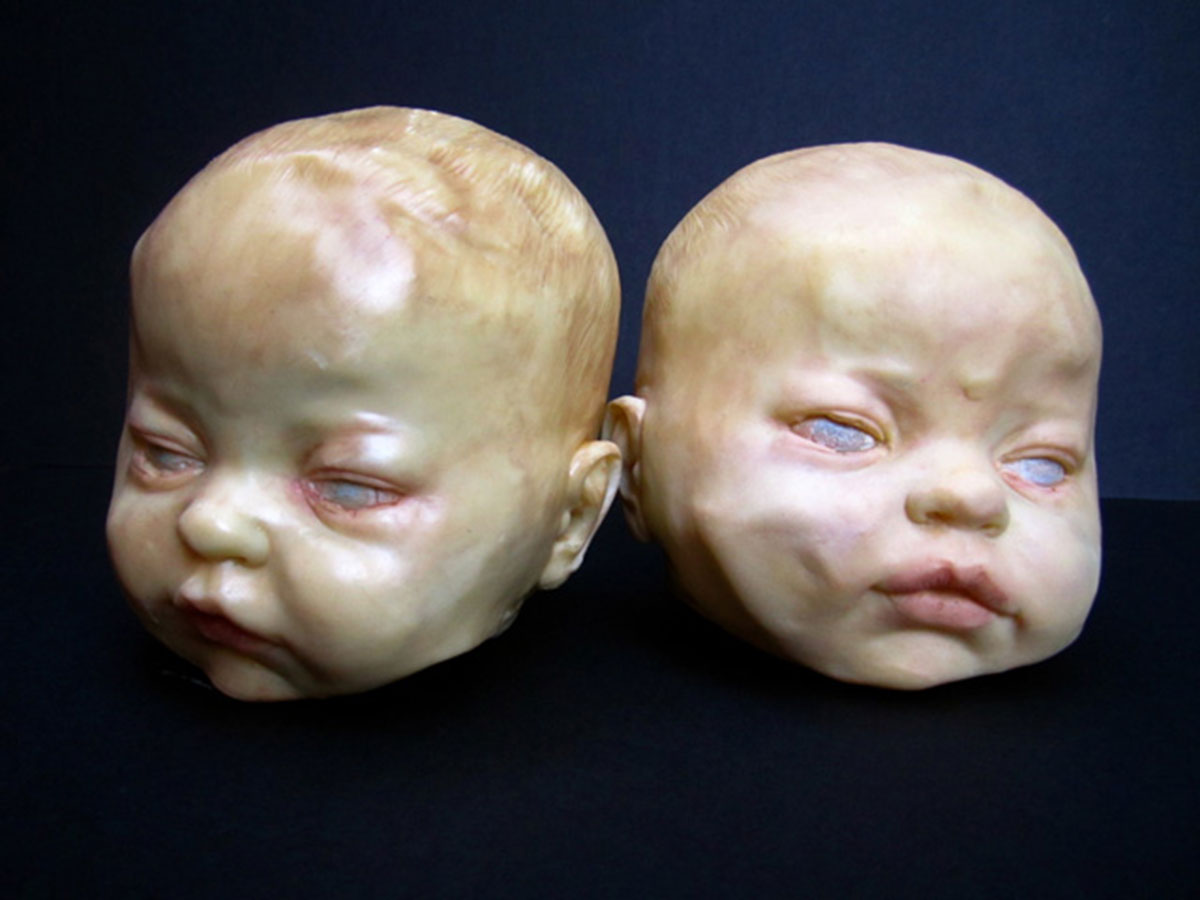 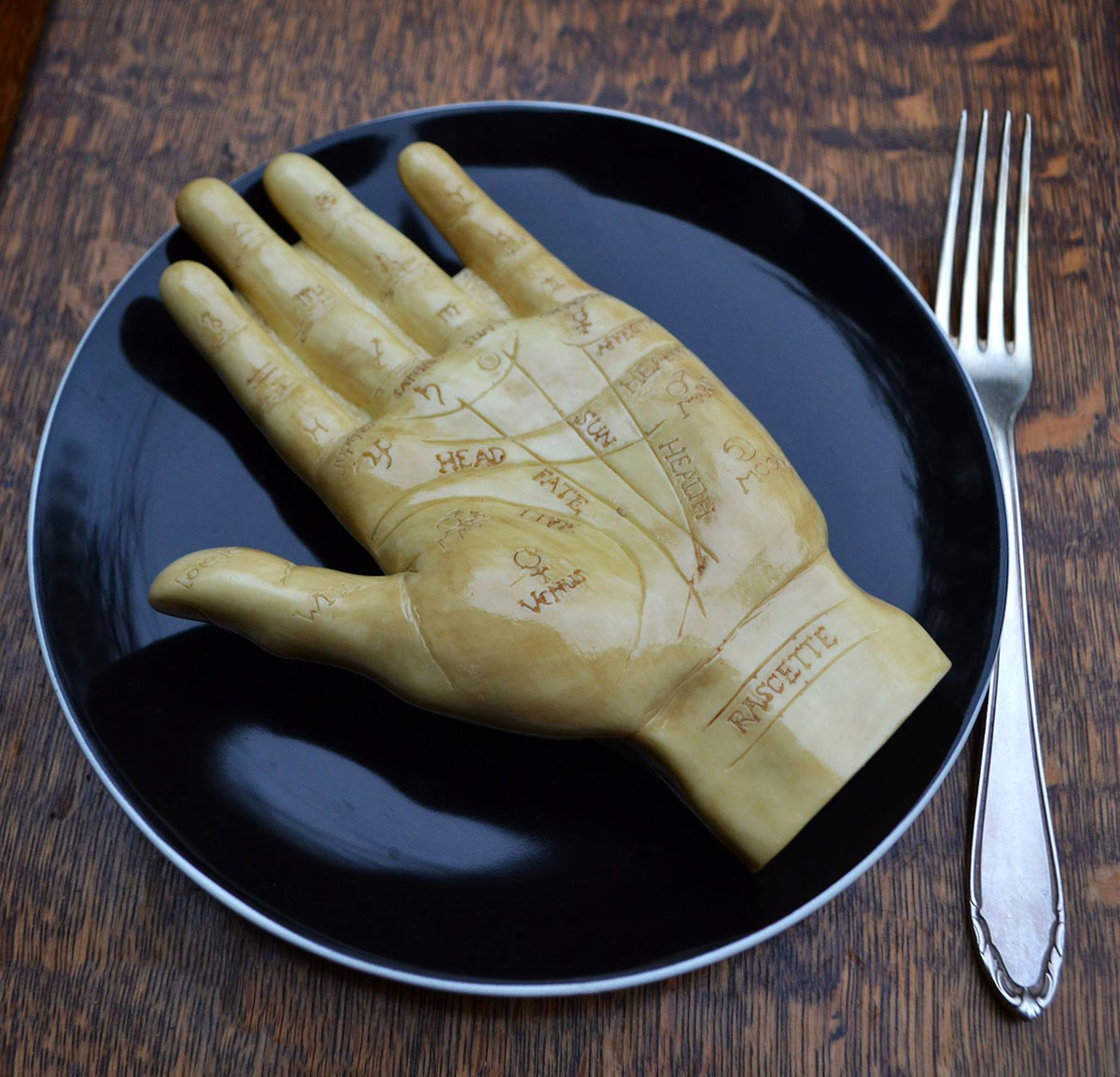 What are your ideas or wishes for your own funeral?
I want to be cremated, then have the remains put in little jars and distributed amongst my loved ones, to do with as they please. I did exactly this with my cat’s remains, which was a nice experience. He was very popular. And big. There was a lot to go around!

Anything else you would like to share?
I’ve been hired to make a cake for The Good Funeral Awards, I’m looking forward to that one. 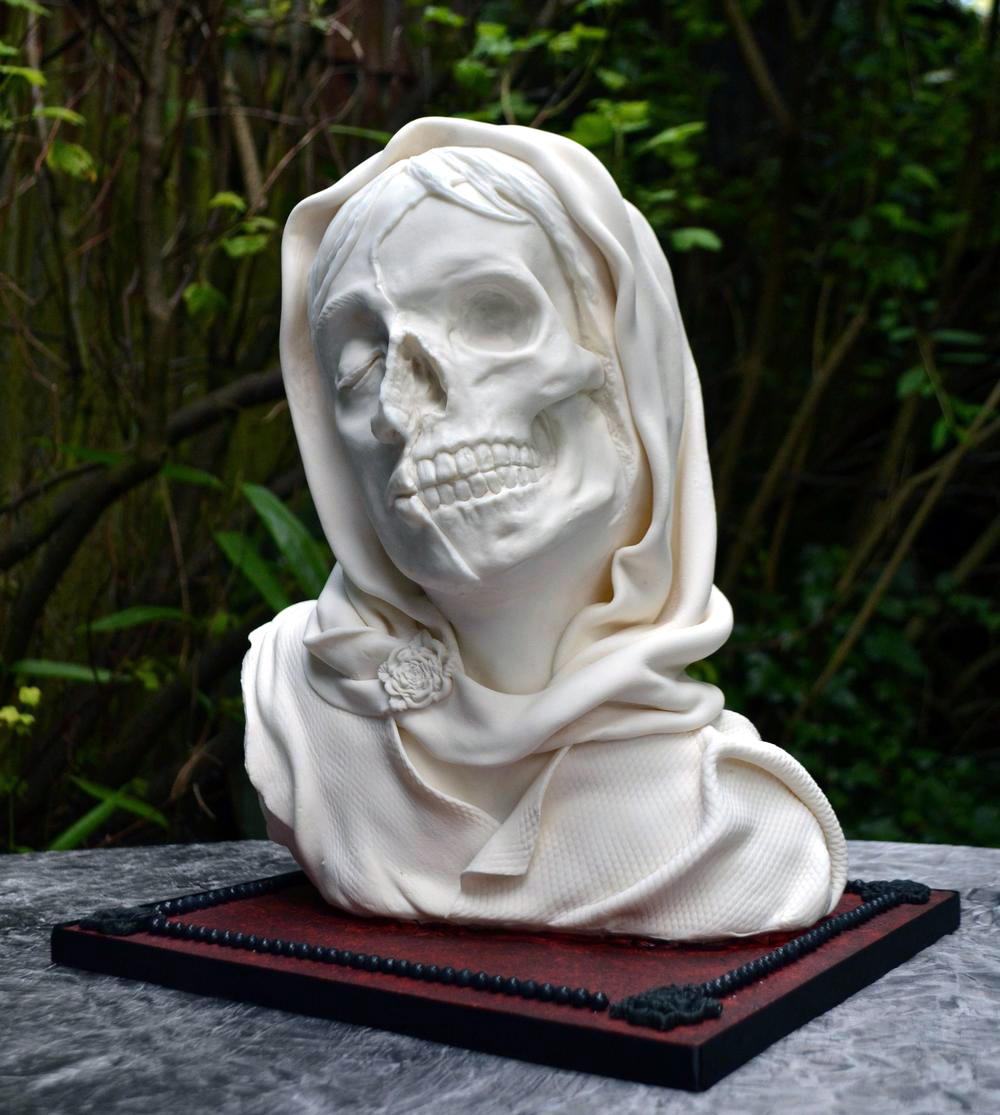