The Boogeyman, Dracula, mutated monsters, zombies, and man-eating werewolves. These are just a few of the mythical creatures man has created to project his fears onto. We tell each other scary stories about these horrifying beings to channel our own shadow side. Our fear of death is ultimately at the core of all our other fears. But what death exactly is or looks like, we do not know. To put a face and voice to this counterforce of life, we have created numerous images to give death an identity throughout history.

“Why do we tend to make Death look like us? Skeletons belong to the living just as much as to the dead. Does an inanimate being automatically represent, or become Death itself?”

Depicted as a ghostly pale man – later on developing into the image of a skeleton – and holding a scythe, the Grim Reaper is probably the most popular personification of death. The scythe he carries, big enough to chop off someone’s head with a single sway, symbolically implies he is the harvester of souls. He travels by horse, which can be traced back to the Book of Revelation in the bible where Death is named as one of the four horsemen who, according to Christian apocalyptic beliefs, come to announce the Last Judgment. 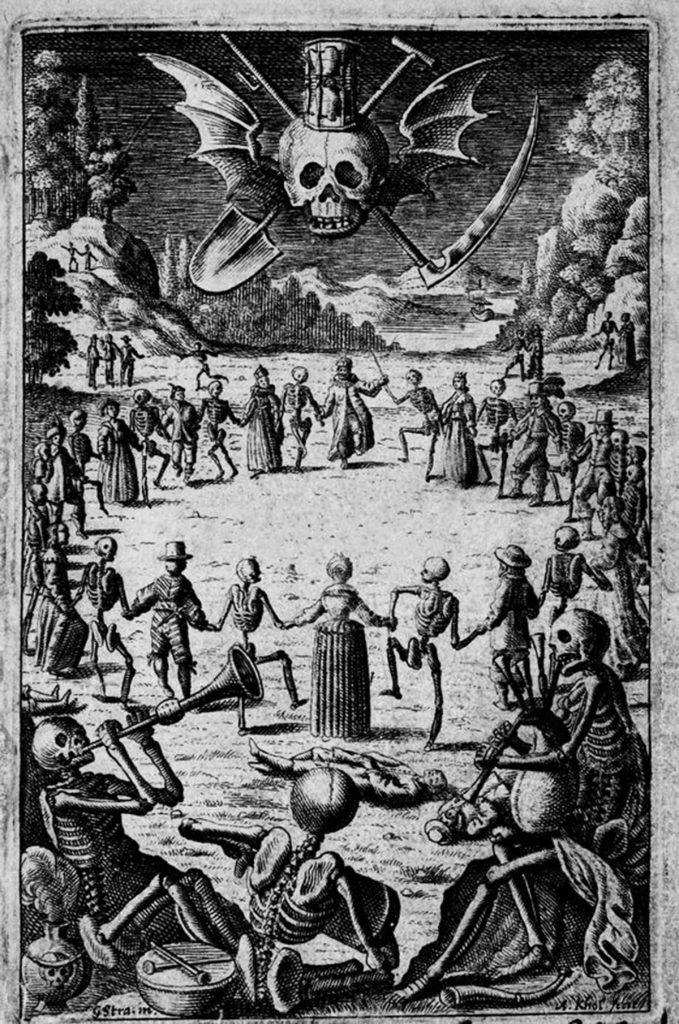 The giddy skeletons of the Danse Macabre

Inspired by the horrors of the Black Plague in the late-medieval era that killed nearly a third of the world’s population, an artistic genre called Danse Macabre emerged.

This Dance of Death personified death as skeletons that rose from their graves and literally joined each other and the living in a macabre dance, hereby reminding us that no matter our status in life, death is the ultimate equalizer; it eventually comes for us all.

The Greek called into existence Thanatos, son of the Night (Nyx) and twin brother of Sleep (Hypnos). He was mainly associated with a peaceful, gentle death, in contrast to his other siblings, for example, the bloodthirsty sisters Keres.

In the event of mortal death, Thanatos would come and cut off a lock of the deceased’s hair before taking them to the Underworld and leaving them with another one of his brothers, Charon the ferryman. Charon then carried the dead across the river Styx, from the world of the living to the world of the dead. In this way, Thanatos is also a ‘psychopomp’, an entity that helps guide the dead into the afterlife. 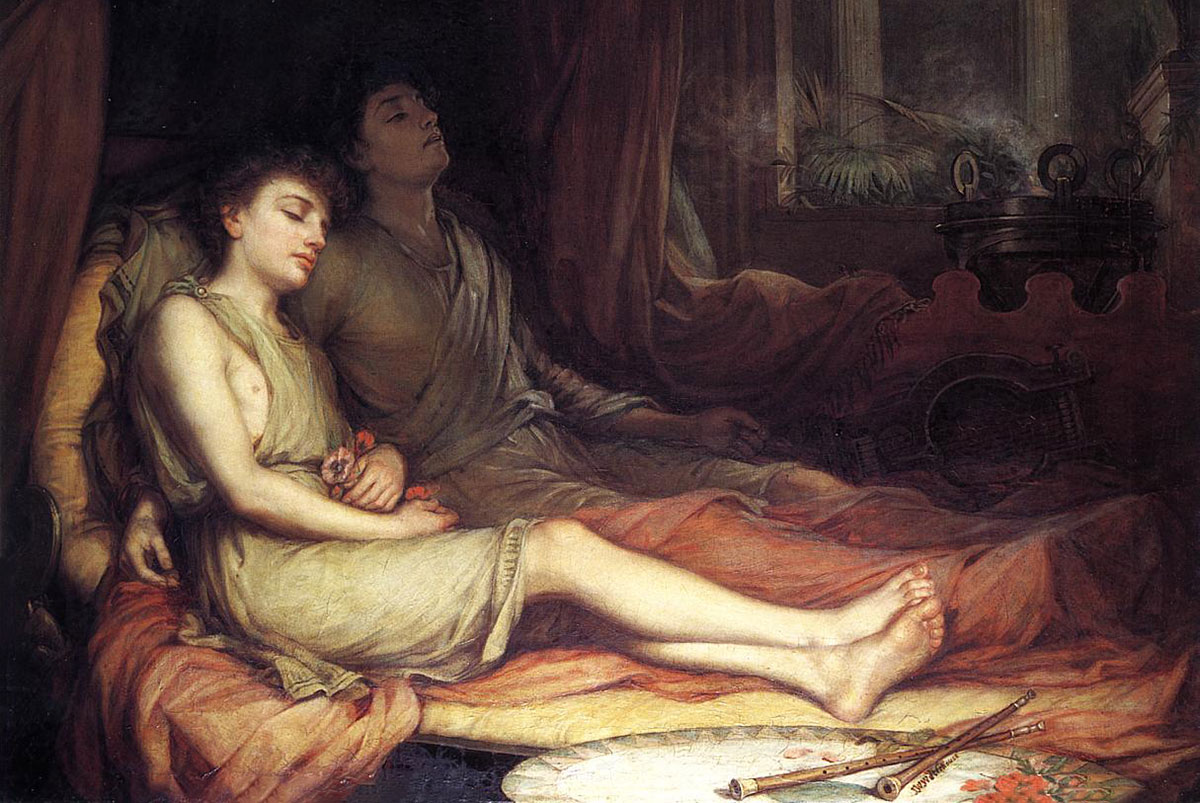 “Sleep and his Half-brother Death” by John Waterhouse, 1874 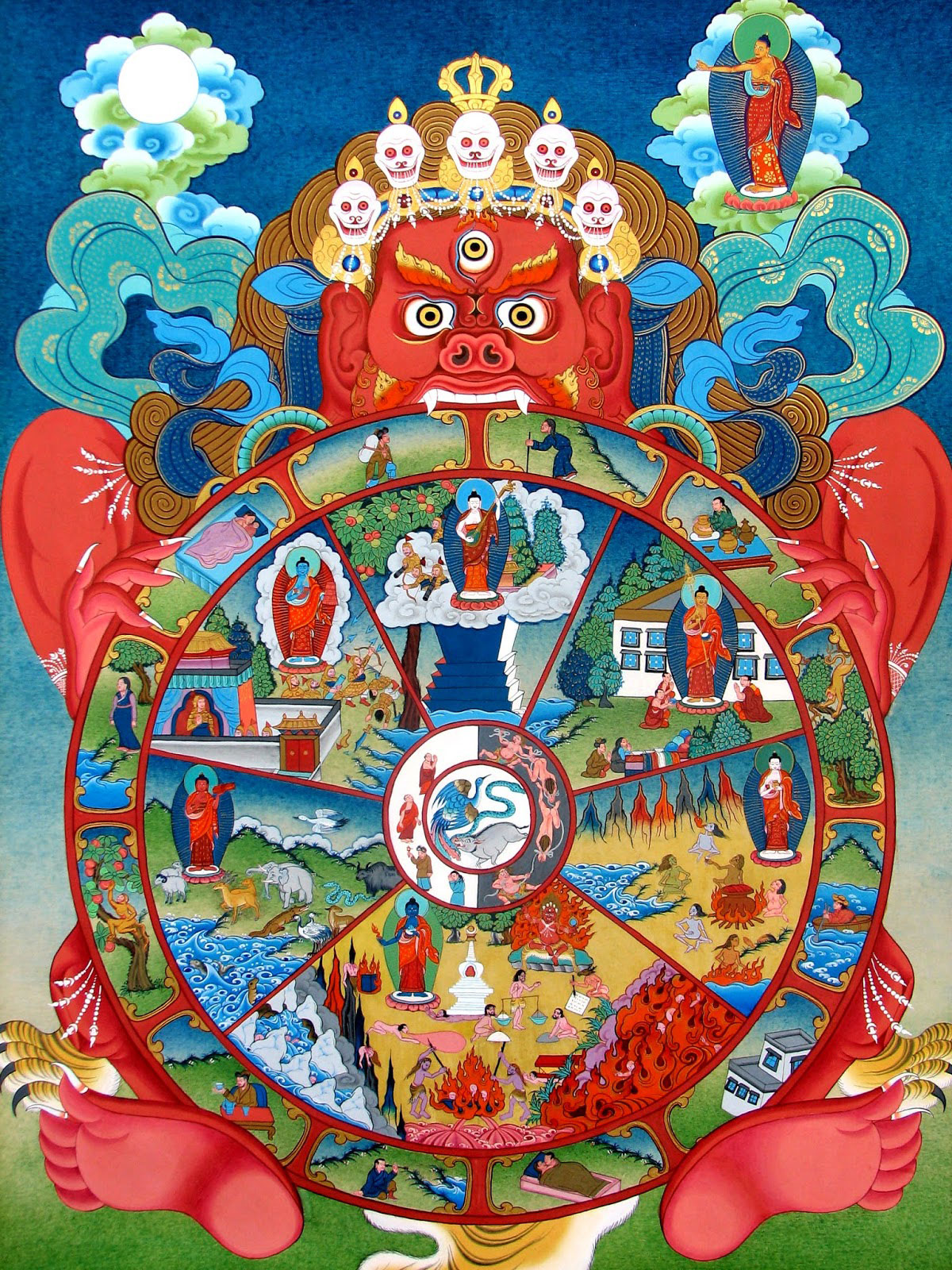 “The Wheel of Life,” used as a meditation tool by Buddhist

In East Asia, Yama is depicted as the lord of death. This embodiment of death is typically portrayed as having dark red or blue skin and travels by water buffalo, which curiously links to the Western images of the Grim Reaper, who is known to travel by horse. He carries a piece of rope with him, which comes in handy when he gets busy retrieving the soul from a corpse.

In this painting he is holding the wheel of life in his mouth and claws, symbolizing the inevitability of death. When a person has died, they come before Yama where he assigns them their next life. It’s important to have Yama on your good side, as this next incarnation could be on earth, but also in heaven or in hell.

“Trying to ‘know’ death comforts us, even though the real Death still hides its true face in the pleasantly anonymous obscurity of nonexistence.” 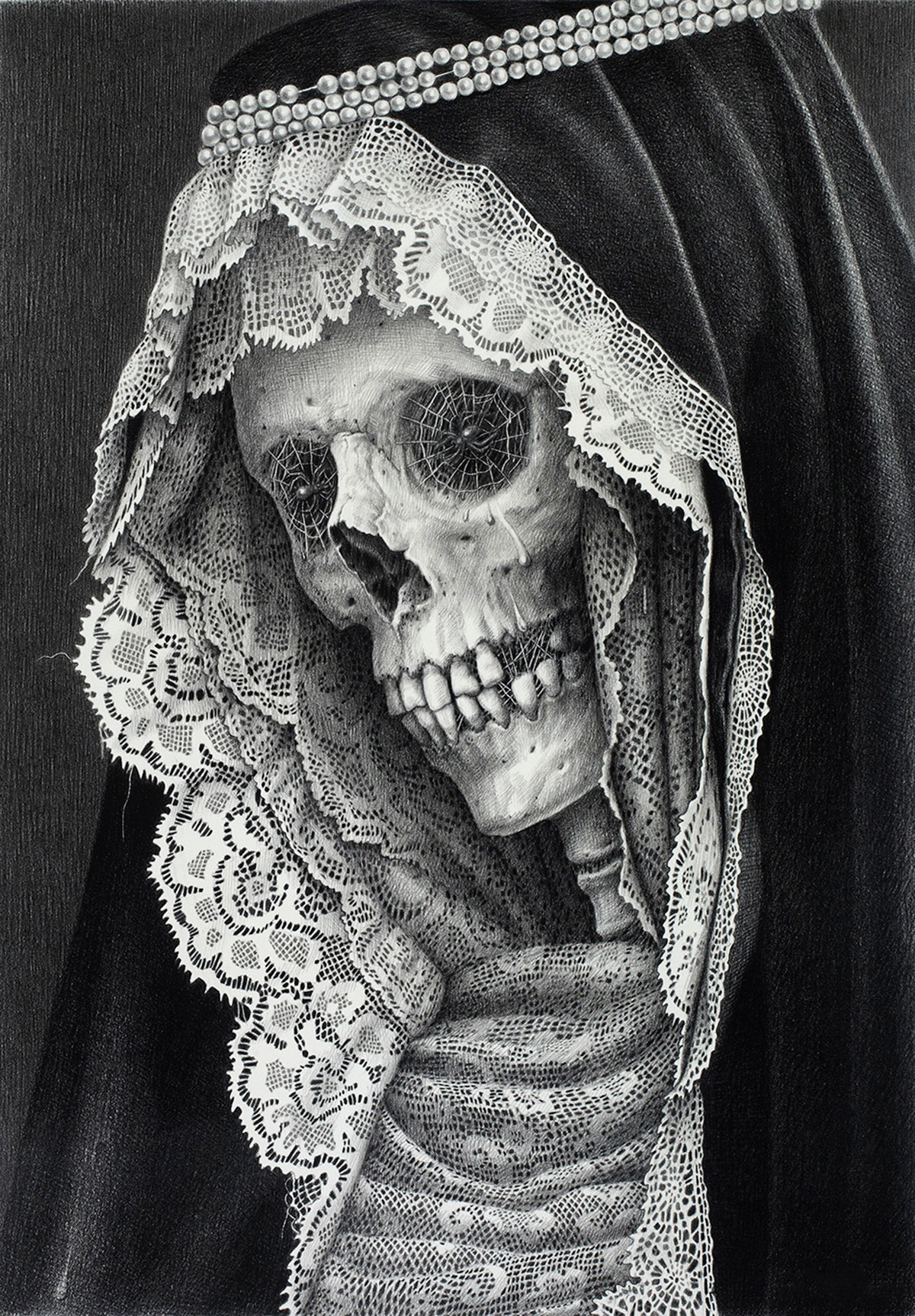 One of the female manifestations of death is Mexican folk saint Santa Muerte. Depicted as a skeleton dressed in a shroud decorated with feminine details like lace, flowers, and jewelry and often carrying a scythe, she looks like the Grim Reaper’s fancy sister.

Although the Catholic Church sees it as blasphemy, Santa Muerte has a growing cult of devotees. She has her own shrine in downtown Mexico City where people come to pray and leave offerings. Santa Muerte is quite a badass lady as she is often associated with drug cartels and criminals and is the patron saint of the LGBTQ community. 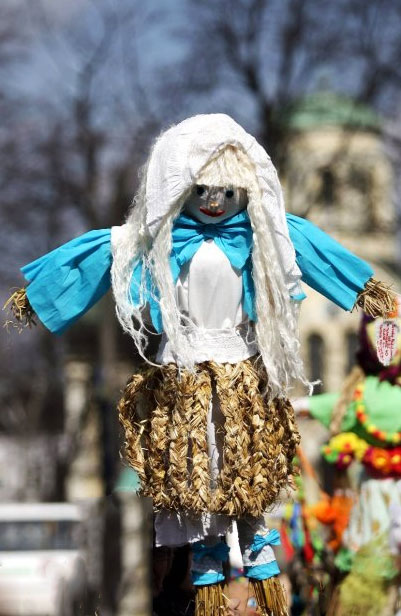 A Marzanna doll made of straw and fabric

Another female version of death can be found in Poland under the name of Marzanna. She’s also known in other Slavic and Baltic countries, under similar names like Morana, Marmora or Mora. She represents an ancient goddess associated with death and rebirth.

Around the spring equinox, a ritual is performed with handmade Marzanna effigies that are carried to a river where they are drowned or set on fire and burned. This custom, which looks an awful lot like the witch trials of earlier times, is supposed to make the locals feel less threatened by death. The dolls are made out of braided straw and dressed in white or colourful local folk costumes. Children gather around and sing songs, while Marzanna burns or drowns, giving this ritual quite an eerie vibe.

A good example of a modern personification of death is presented in the Swedish movie The Seventh Seal, directed by Ingmar Bergman. This epic masterpiece, of which the title refers to the Book of Revelation, shows a man in conversation with Death. It is set during the middle ages and as the Black Plague strikes the country, Death comes to visit the man and tells him his time has come. The man challenges him for a game of chess, hoping to win time by beating Death in the game. 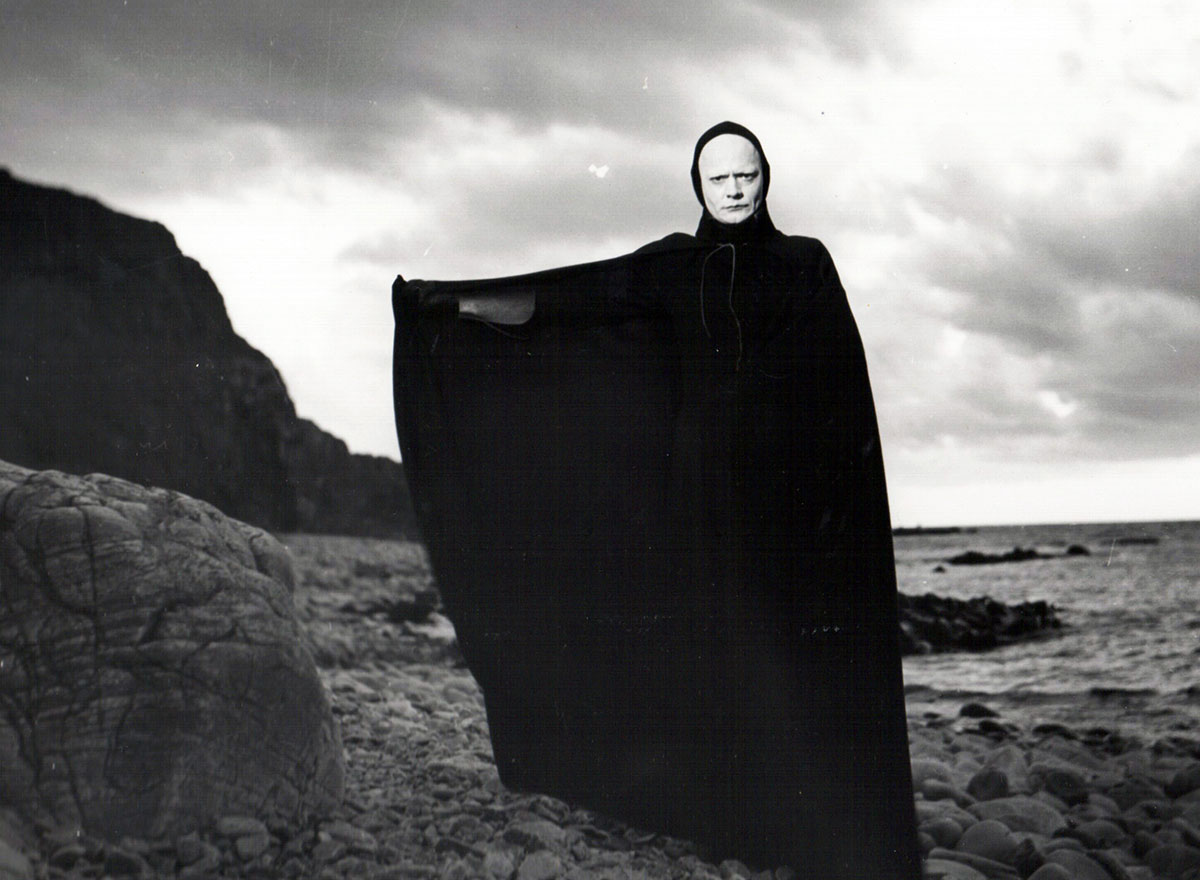 As you can see, we have given death many different faces throughout time. And as our cultures develop, our image of death also evolves. Which one of these macabre figures is your favourite?

A closing thought:
If death is the opposite of life, then why do we tend to make Death look so much like us? A skeleton belongs to a living being just as much as to a dead one. But does an inanimate being automatically represent, or better yet, become Death itself? All physical manifestations are a part of our material world, including everything that is dead and decayed, and are therefore a part of life. Perhaps this means that reducing Death to any kind of recognizable shape is absolutely impossible and pointless, apart from its symbolic meaning.

Trying to ‘know’ death comforts us, even though the real Death still hides its true face in the pleasantly anonymous obscurity of nonexistence.