After my mother passed away last month, I took a trip to Iceland to clear my head and renew my energy.  The landscape and climate perfectly fit my mood, yet it being unknown territory put things in a different perspective and helped me transition into a new beginning. I visited two cemeteries during my stay in Iceland’s winter wonderland: one in downtown Reykjavík and a smaller one in Vik. If you’re into snow covered graves and tiny wooden churches, I have some treats in store for you! 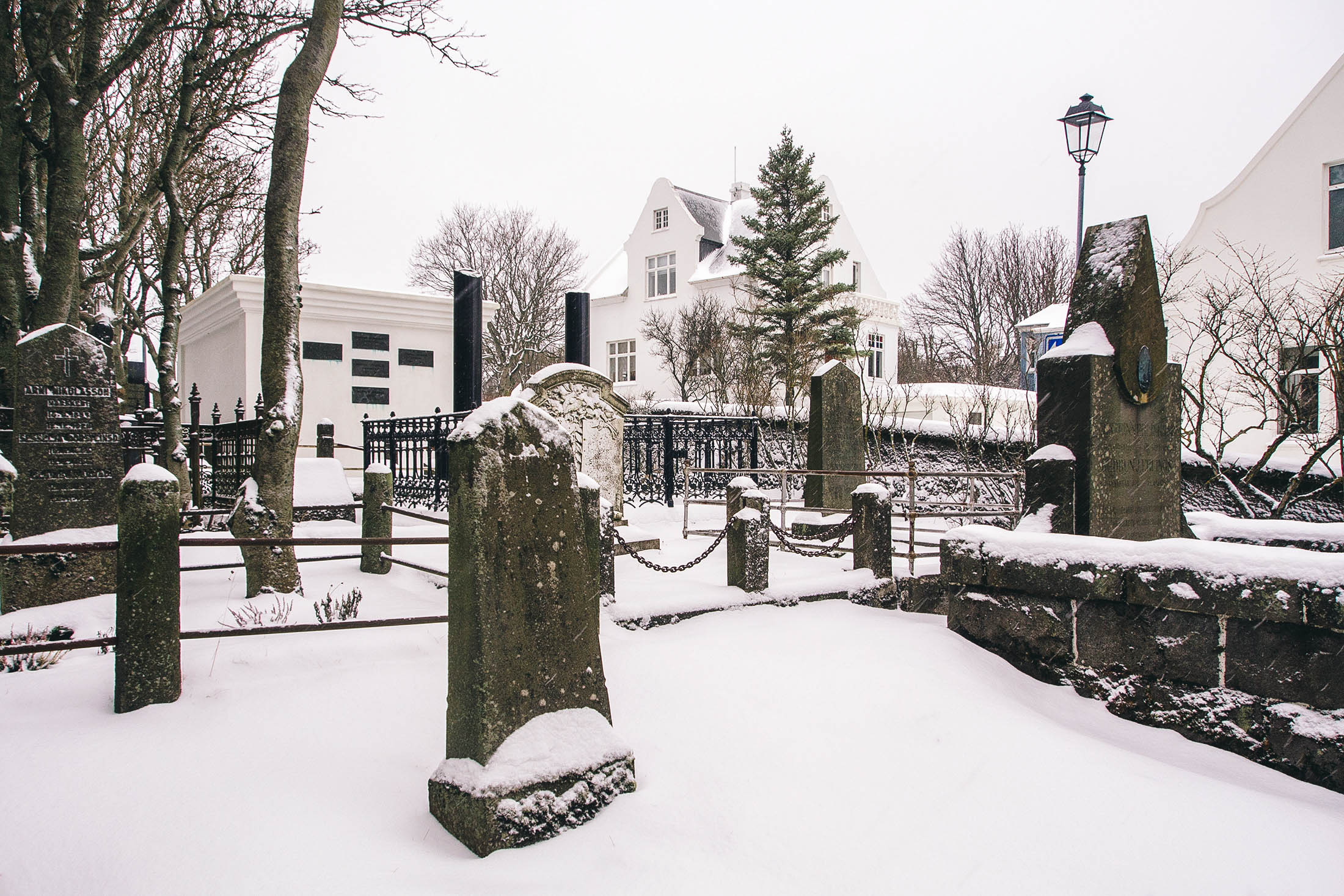 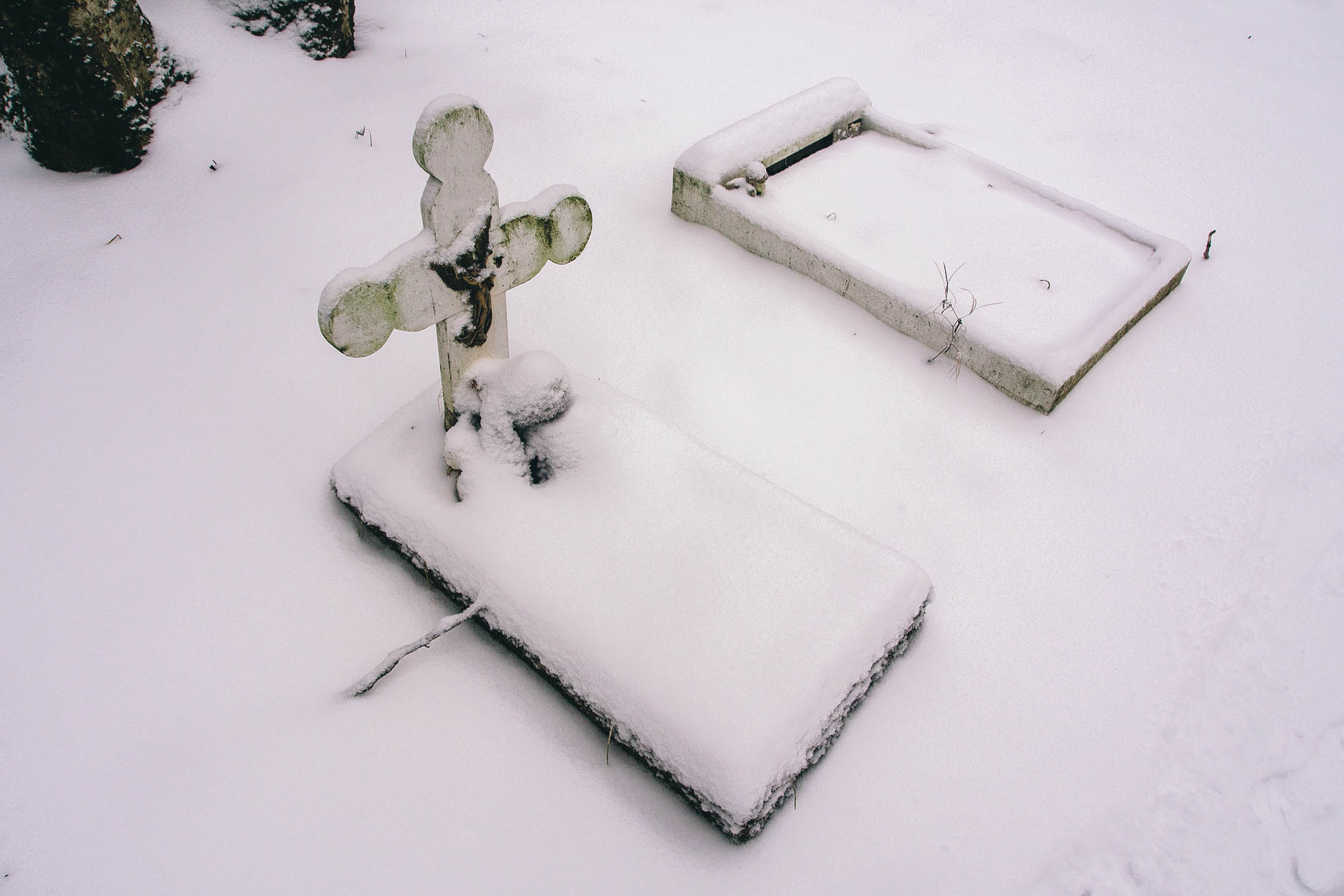 I started my journey in the island’s capital Reykjavik, where I visited Hólavallagarður cemetery. Super close to downtown Reykjavik, Hólavallagarður (translation: “garden on a hill”) is located on a hill in the midst of a lovely residential area. Consecrated in 1838, the cemetery accommodates 10761 known burials. Almost 75% of the population is a follower of the Evangelical Lutheran Church of Iceland and 99% of the funerals take place in the church. There is only one(!) crematorium in entire Iceland, at Fossvogur Church in the south of Reykjavik, where cremation has been possible since 1948. Around 25% of Iceland’s deceased are cremated. Today, the urns can be placed alongside the graves of already departed family members, in order to create family graves. 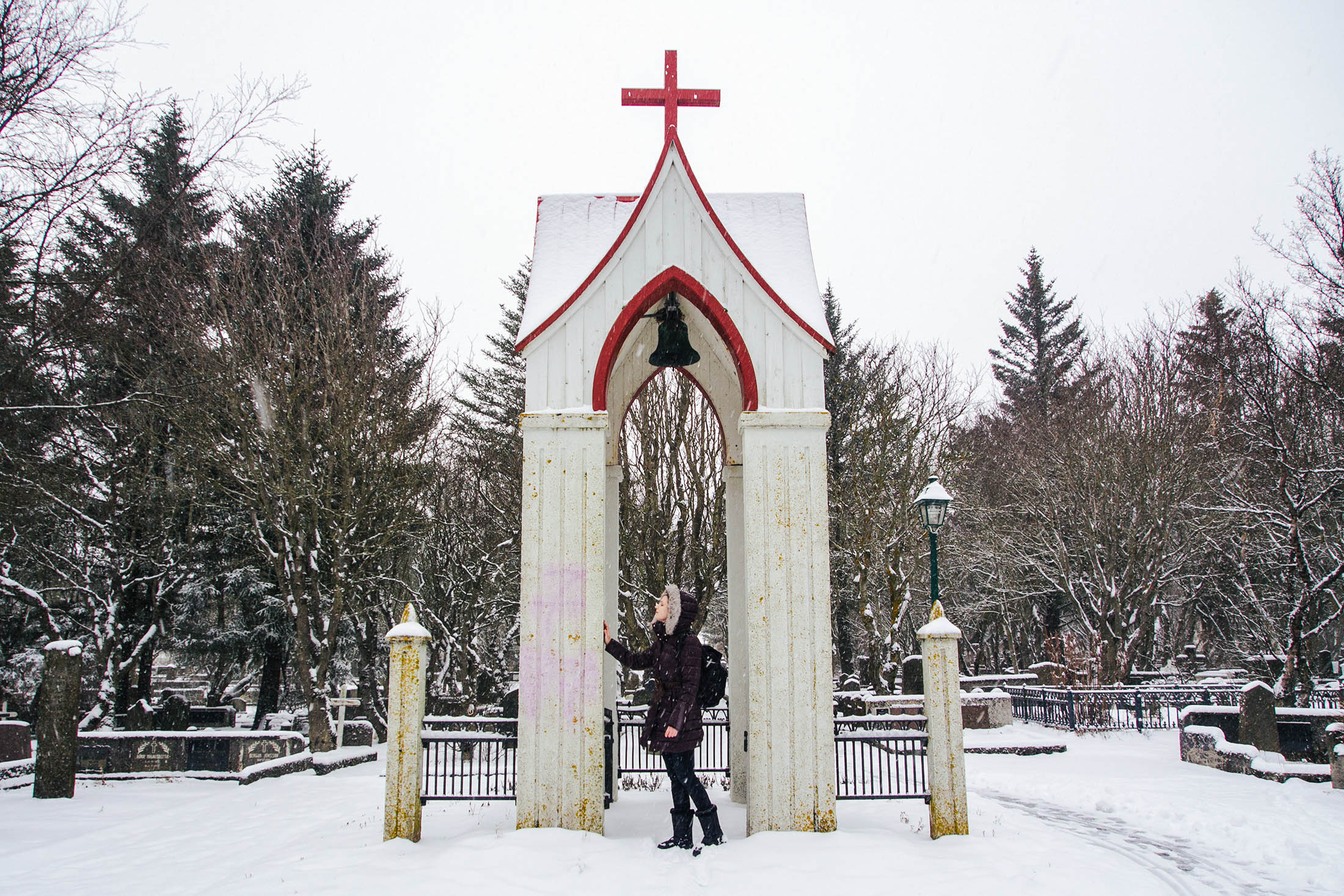 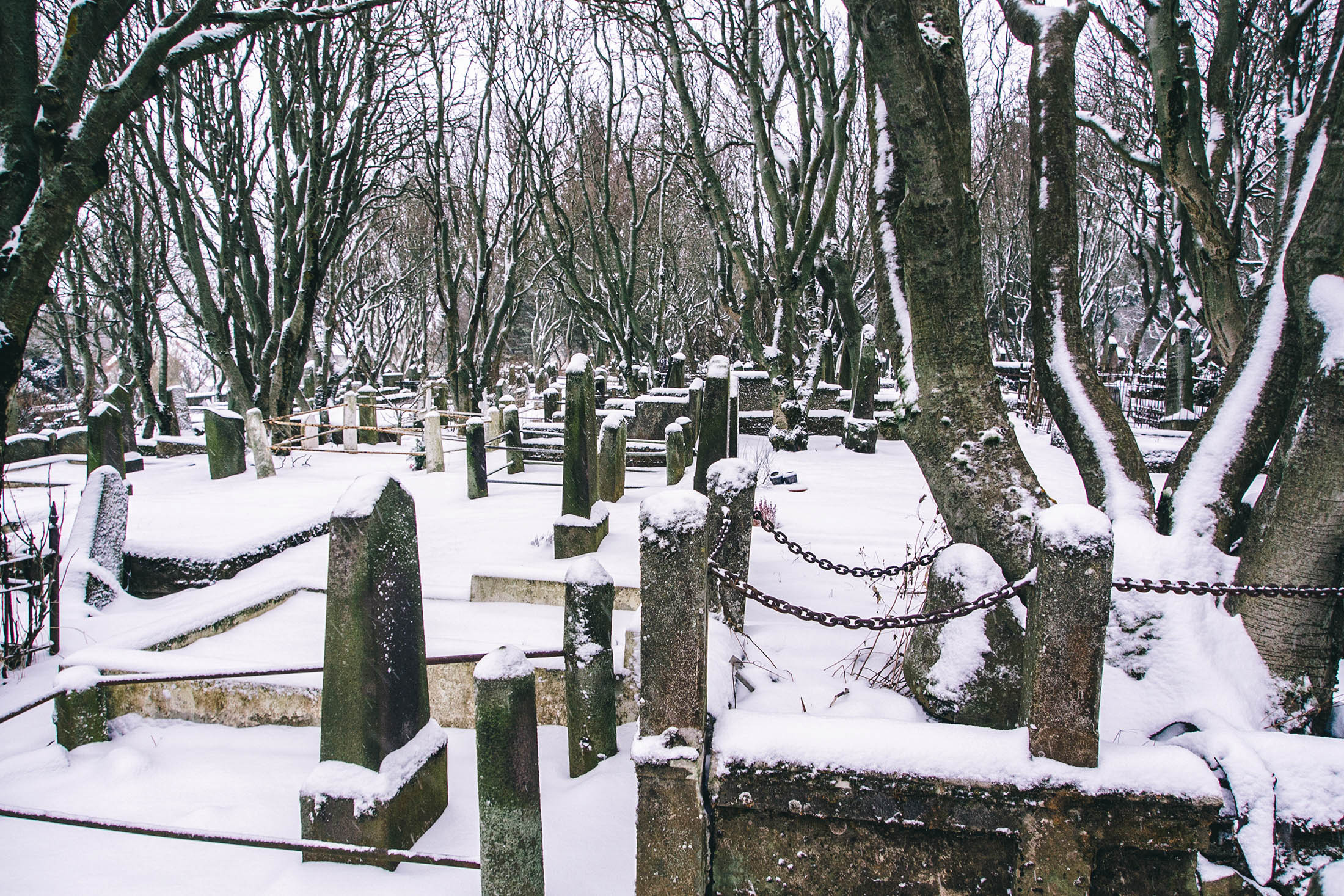 Before embarking on this trip I heard there aren’t any trees in Iceland, or at least not very many. I thought this was a bit of an overstated myth. But the truth is there really aren’t any trees! I spotted a few trees here and there while driving through the landscape, which I would personally categorize as bushes rather than trees. But there are trees on the cemetery grounds of Hólavallagarður. Lots of trees. In fact, I haven’t seen more trees anywhere else in Iceland than I did at this graveyard. I bet this place is gorgeous to visit during the summer, providing a home to all kinds of birds and cool shade for everyone below. It doesn’t get much warmer than 25 °C during summertime, but hey. 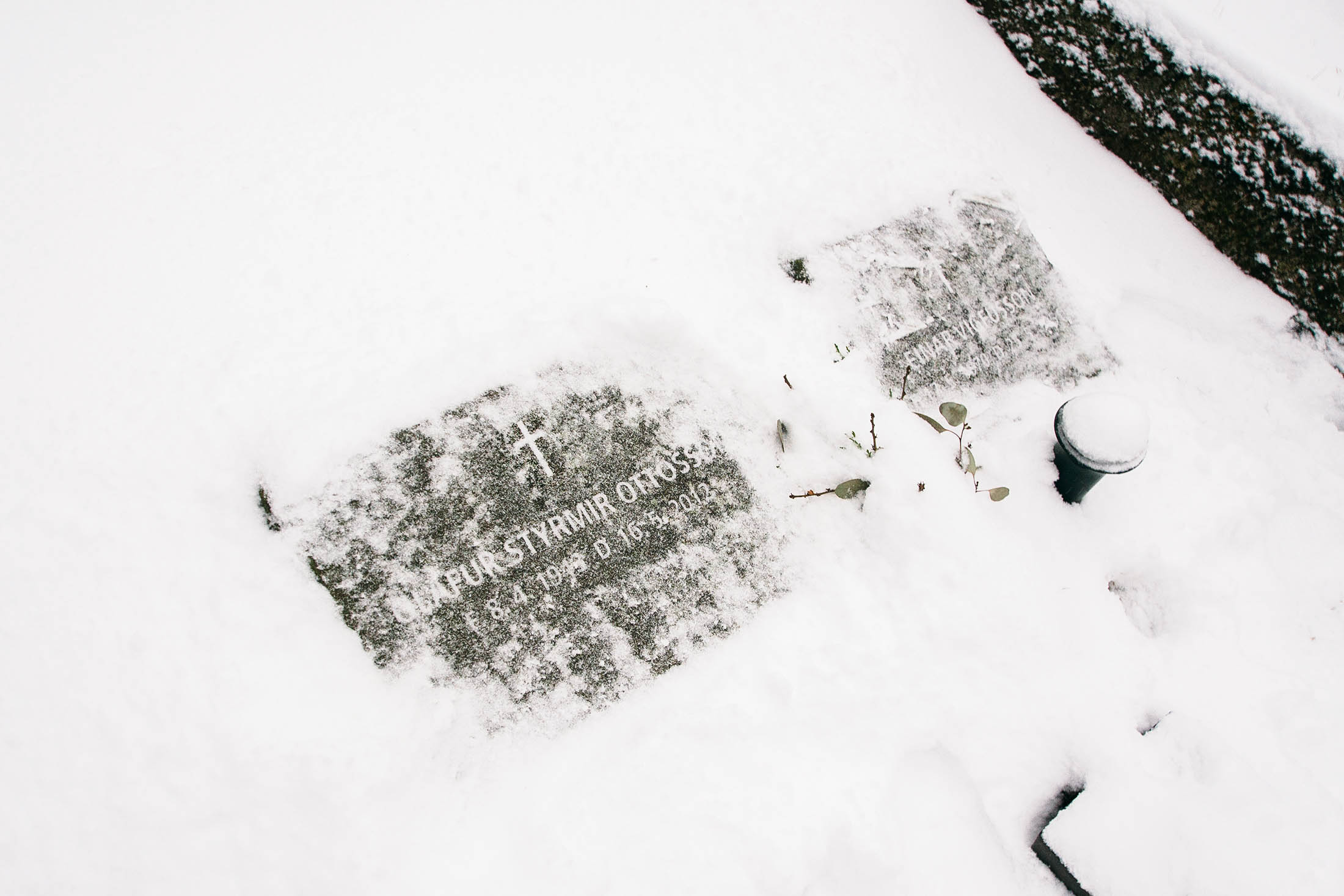 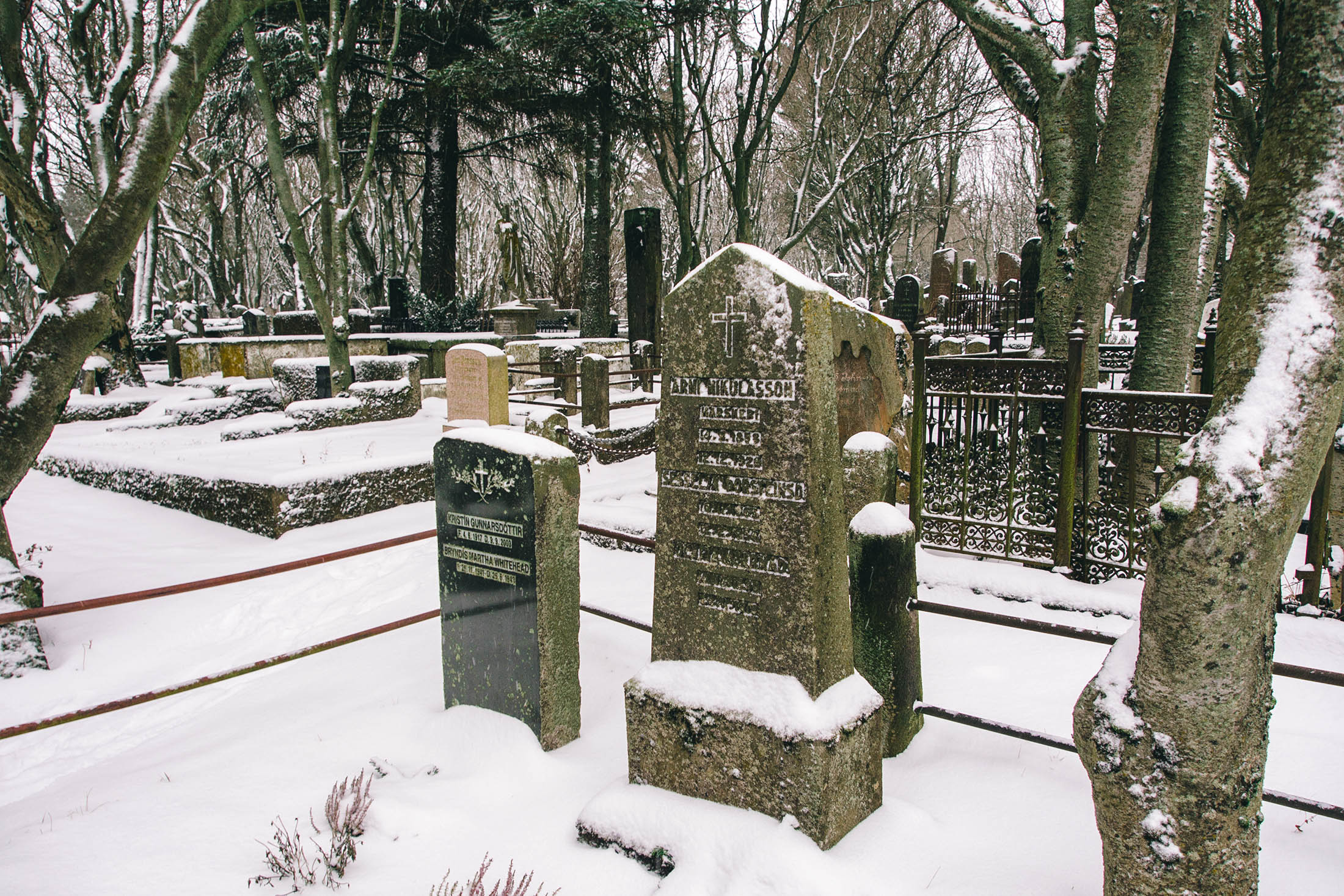 Icelanders have a distinctive folklore which is rich in tales of nature spirits, elves and trolls. They also have this belief that the first person who is buried in a cemetery will be the guardian or “light bringer” who will help guide the other souls of those buried there to the afterlife. The guardian of Hólavallagarður is Guðrún Oddsdóttir, buried in 1838, who was the wife of magistrate Þórður Jónassen.

The cemetery is very well kept and has paths leading through the rows of graves, but because of the thick layer of snow it was hard for me to make out if I was walking on a path or if I was actually walking right on the graves themselves. Then, as I was exploring the graves and made my way through, it actually started snowing. The snow storm got heavier within minutes, and I soon had to stop taking pictures as my camera started resembling a tiny yeti. This cut my visit a lot shorter than I had hoped. 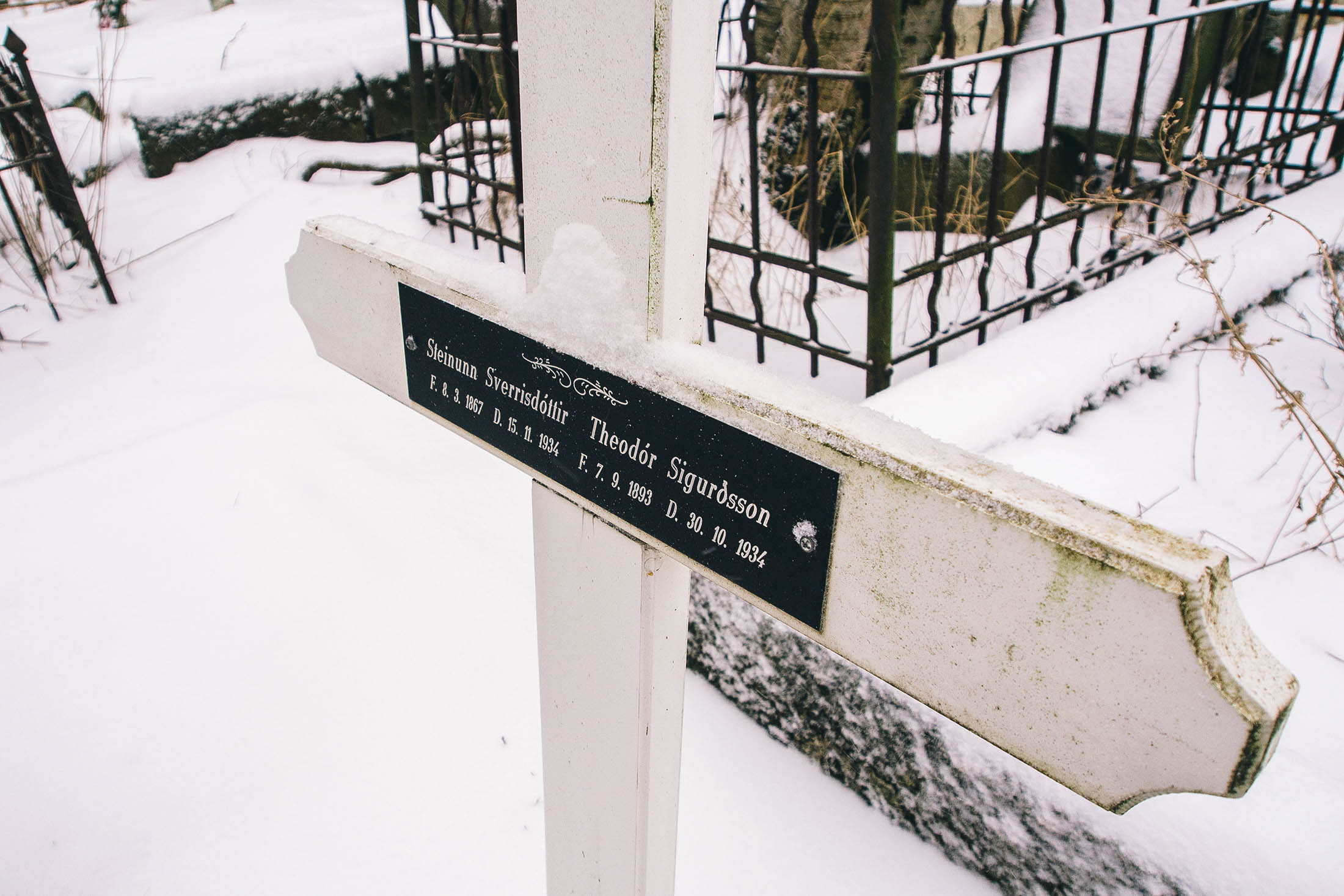 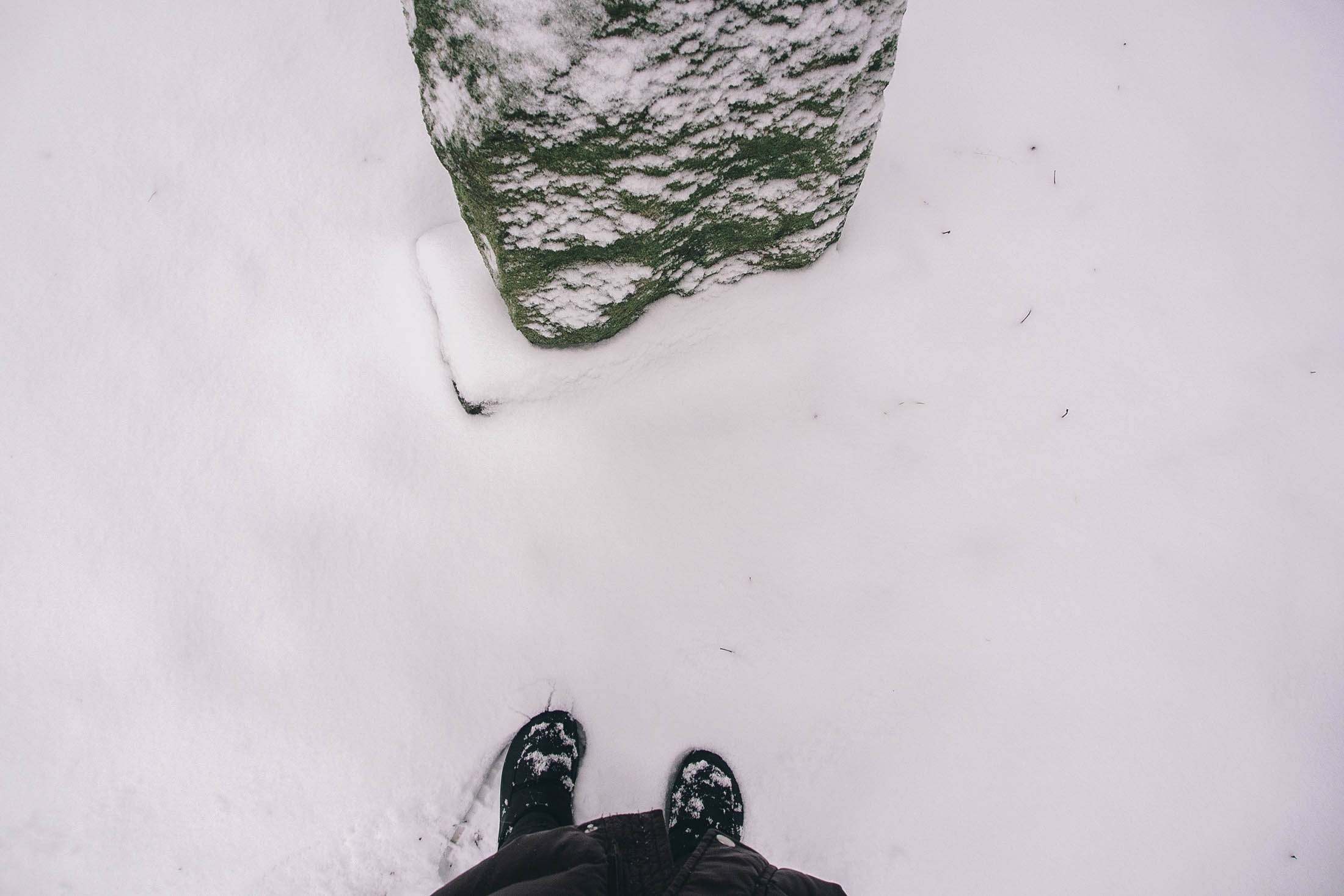 Grave and snow, snow and grave. And my feet. Probably dancing right on top of where this person is buried. Would you mind it if you were dead and buried and someone stepped on your grave? Or worse, danced on it? I know I wouldn’t.

One of the best things to do in Iceland is get in a car and drive, drive, drive. The landscape is so utterly gorgeous, and it changes before your eyes as you pass through it. Snowcapped mountains, misty waterfalls, yellow hay, turquoise rivers, black beaches, it’s all there. Due to limited daylight during winter I only got to see about a third of the island, as there aren’t that many hours you can drive. Unless you want to drive in the dark, and with dark I mean absolute dark, as most roads do not have any street lights. 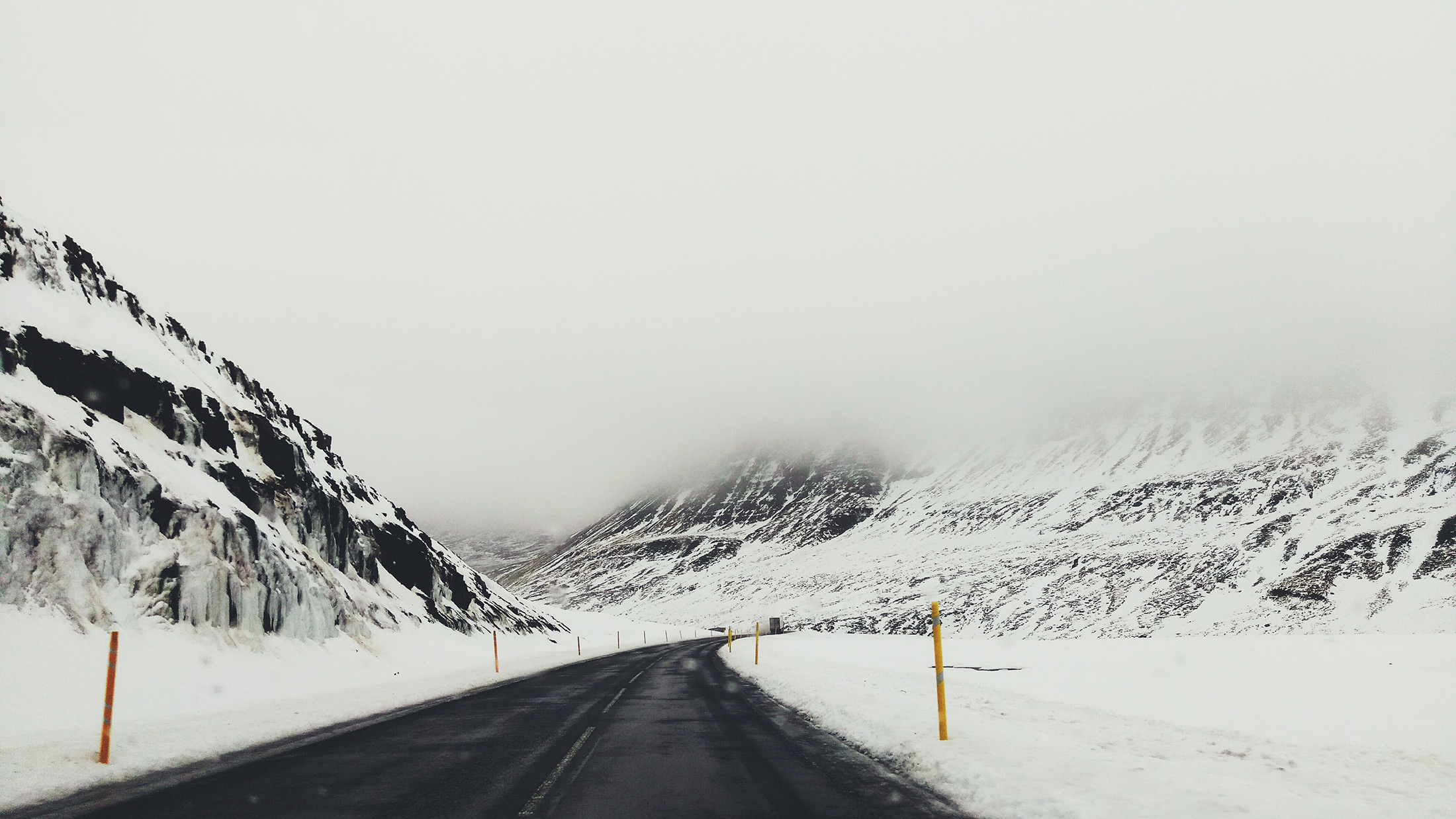 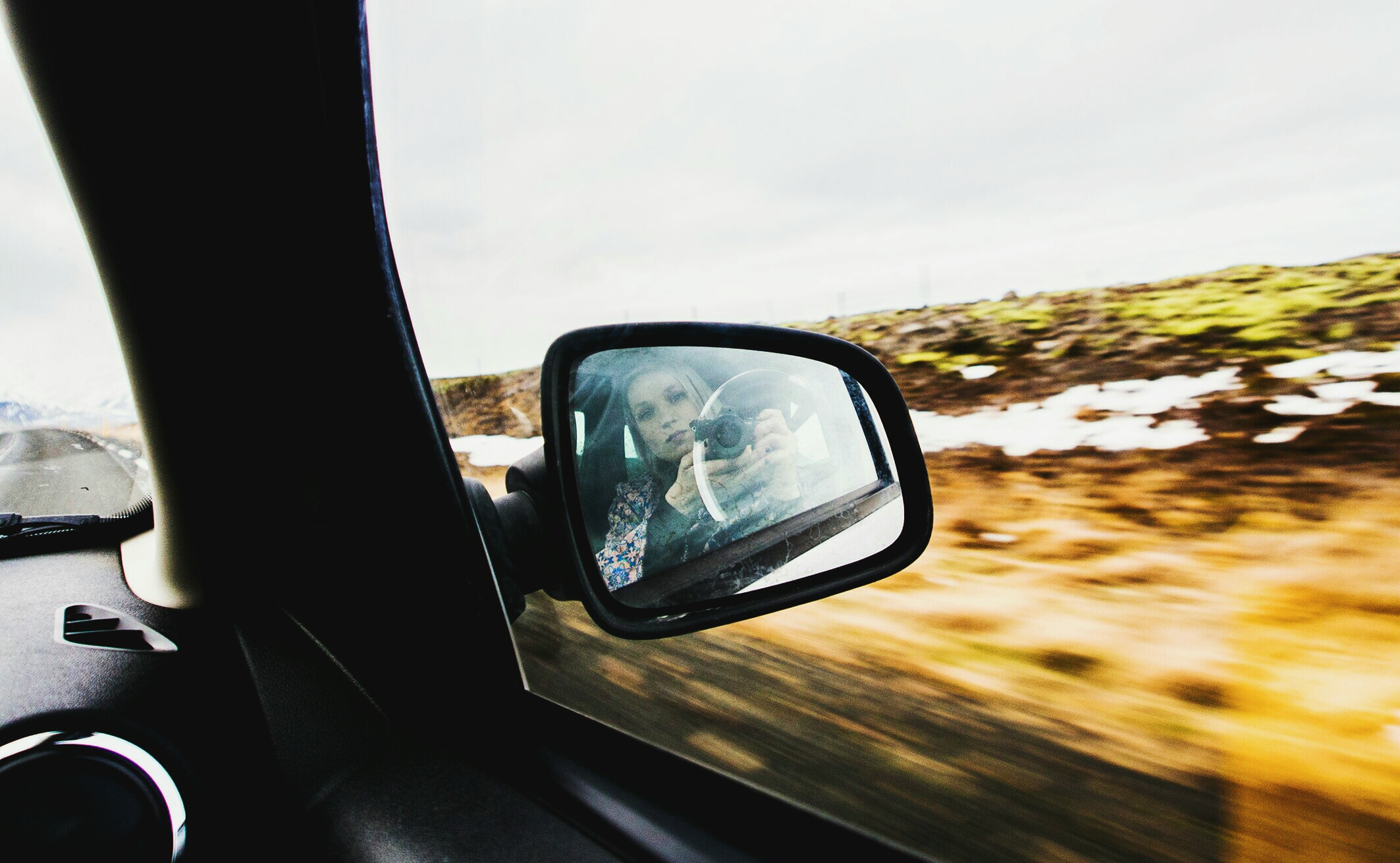 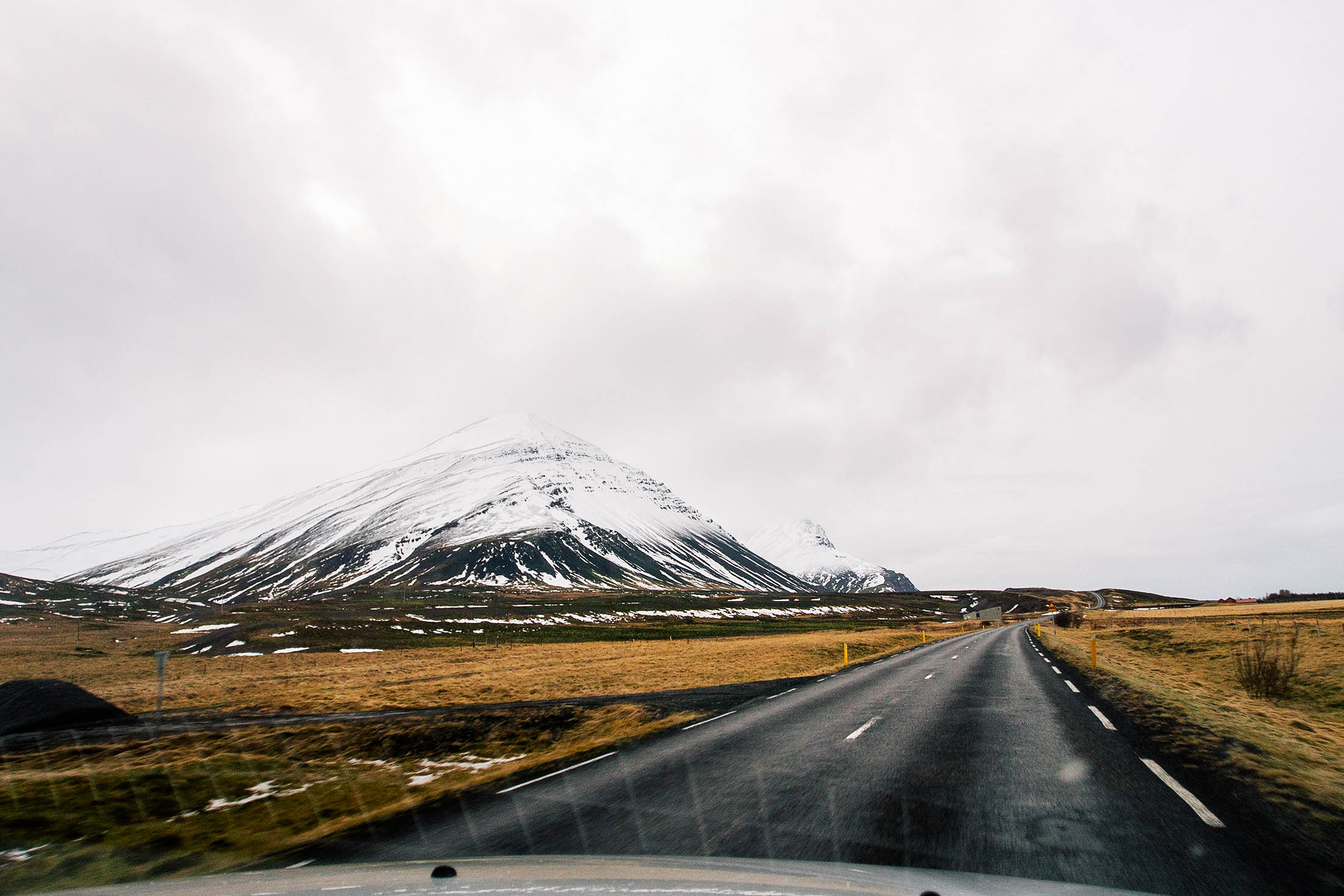 The second cemetery I encountered was in Vik, or Vík í Mýrdal, which is the southernmost village of the island, famous for its black sand beaches. It is located close to volcano Katla, which is said to be able to erupt any time now. This eruption could theoretically melt enough ice from the Mýrdalsjökull glacier to trigger a flood potentially large enough to obliterate the entire town. The town’s church is thought to be the only building that can survive such a flood. 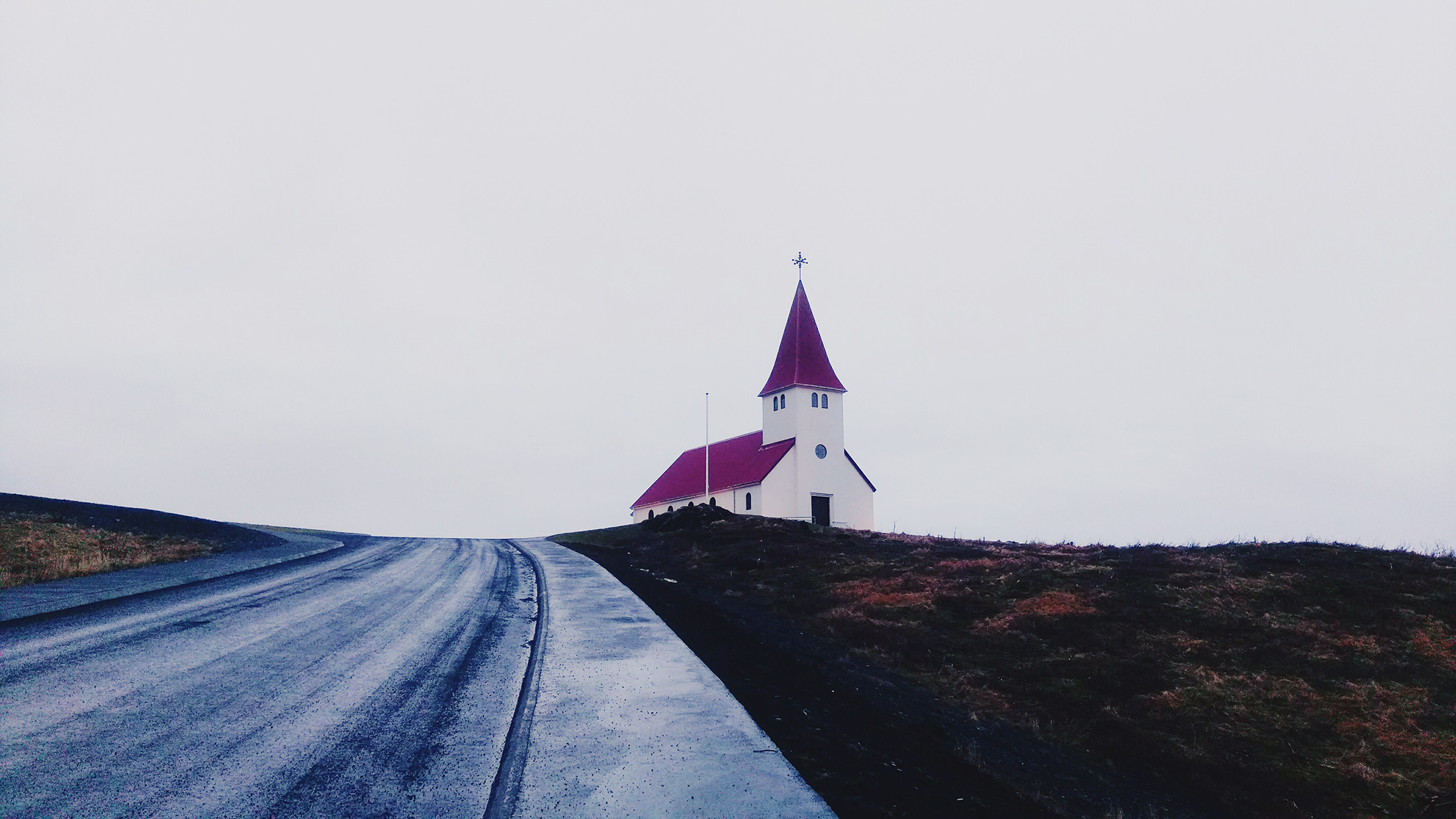 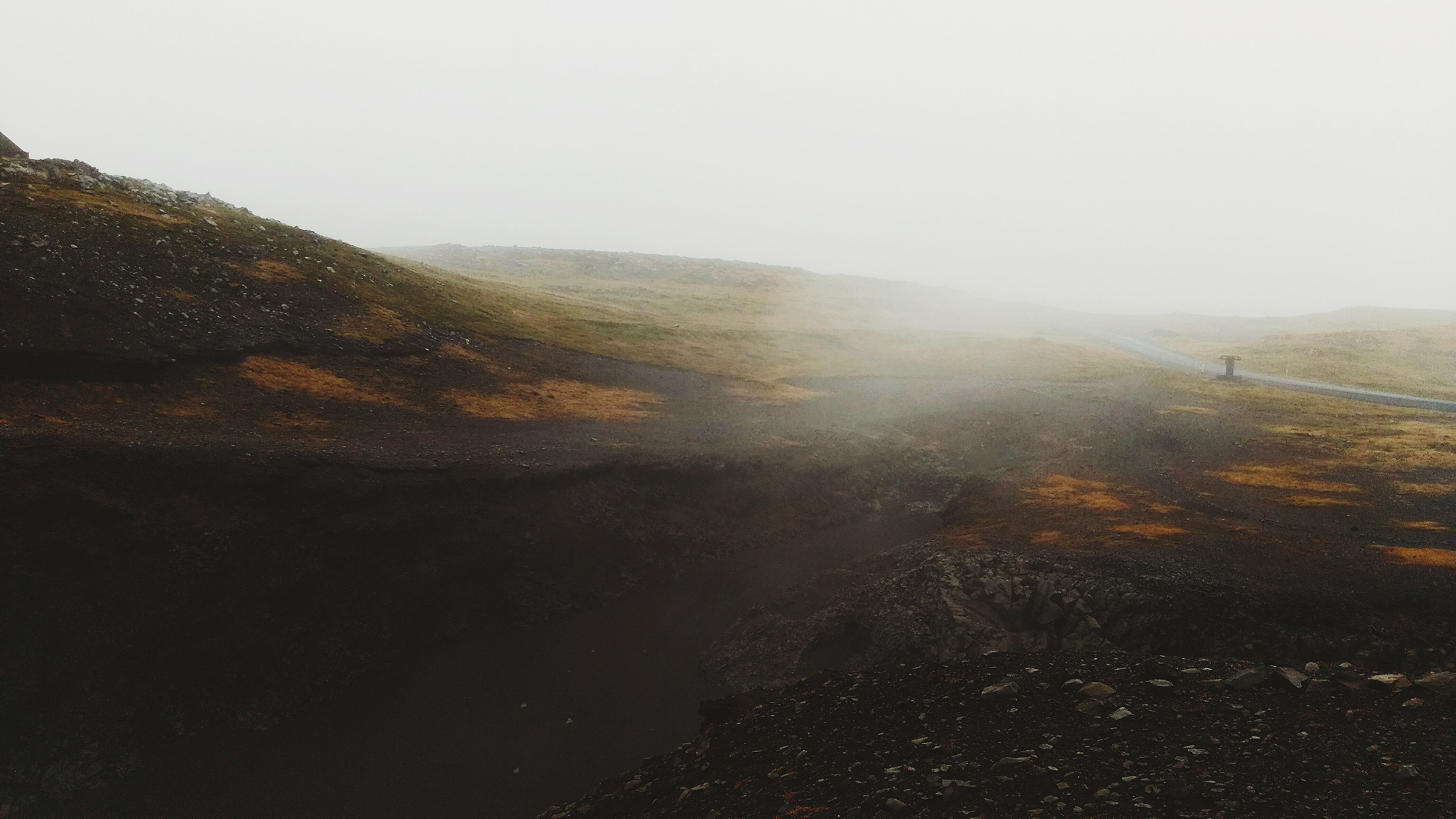 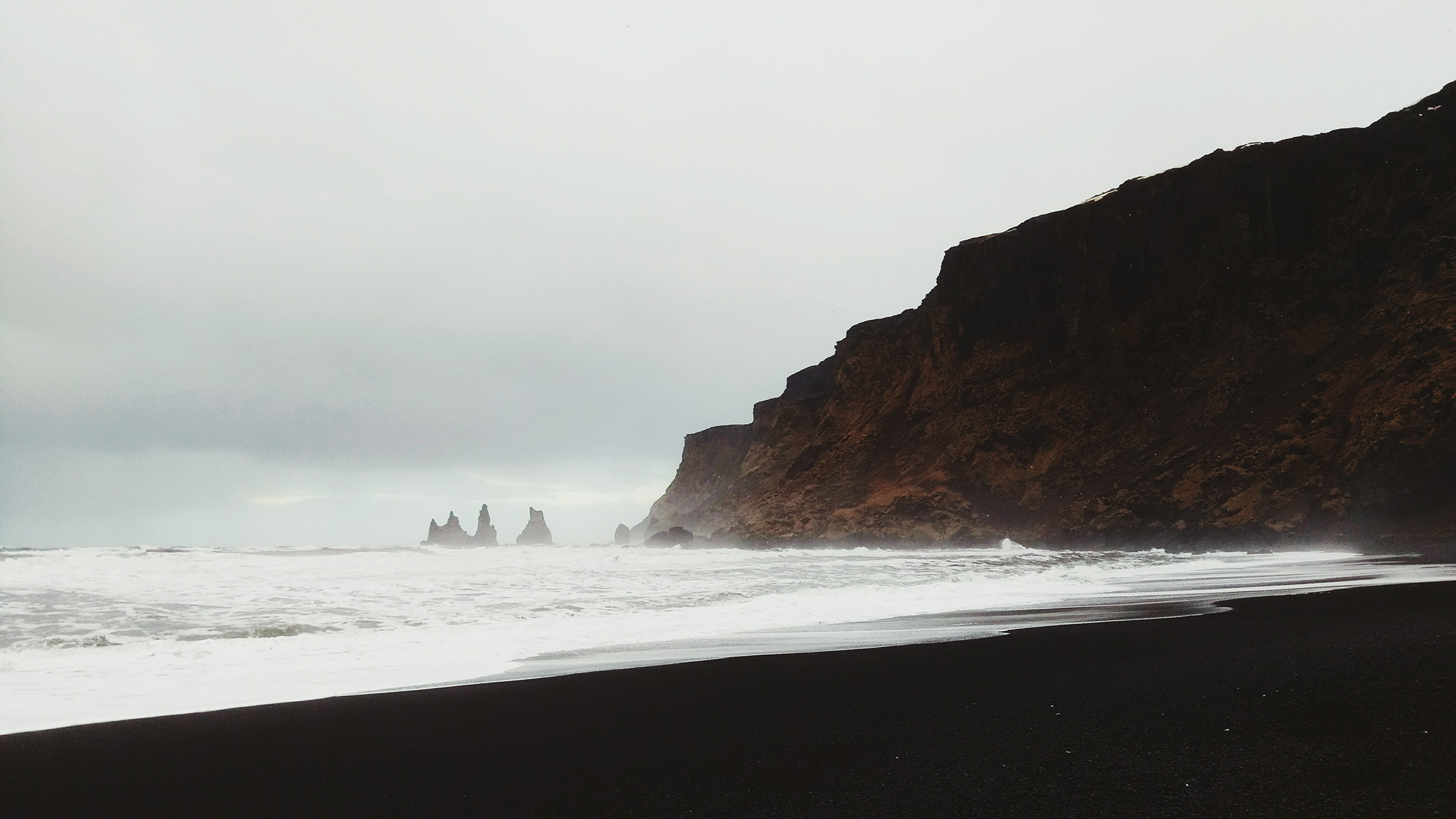 A short drive from the town’s center is the settlement of Dyrholaeyth, with this other church on a hill, very similar to the one in Vik or really anywhere on the island. It has a small cemetery surrounding it, with roughly one hundred graves. 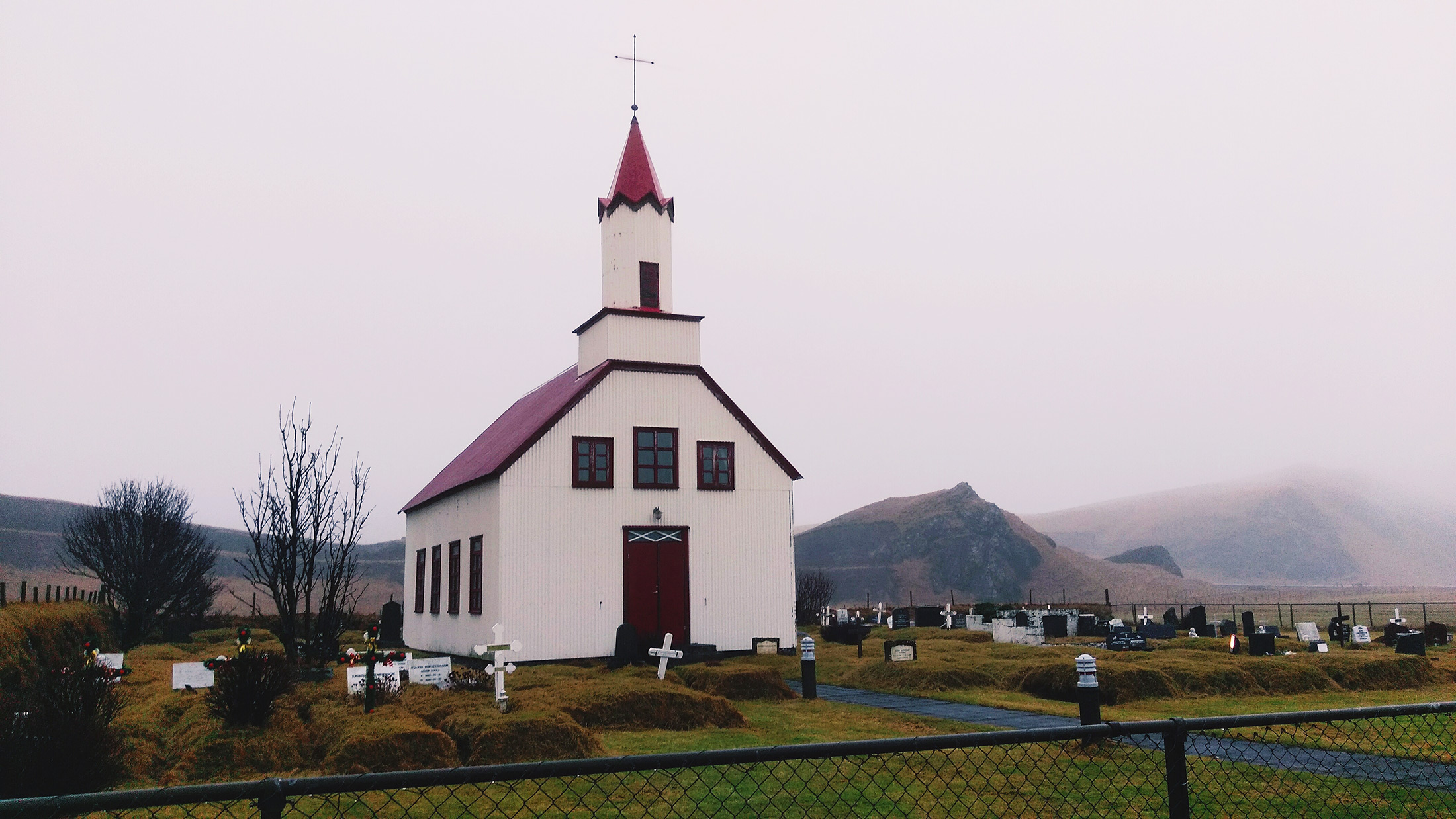 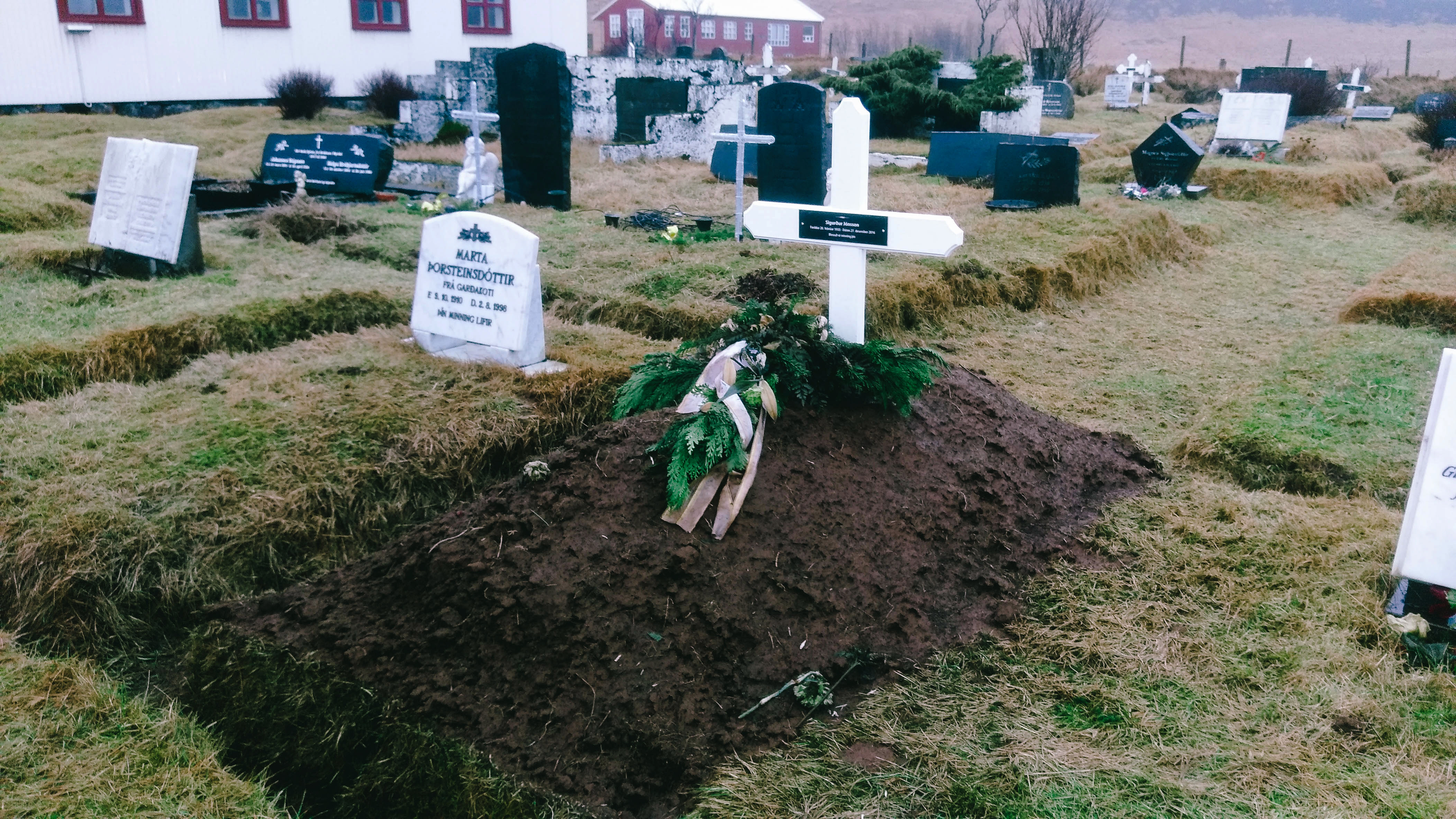 During my stay in Iceland I had taken on an Icelandic name: Þórhildur. The way I pronounce it sounds like a declaration of war or rage mixed with total lunacy. As I explored the graves, my friend Silvan jokingly made a bet with me to find Þórhildur’s grave. Which, as you can see, he proudly won.

Closing thoughts: Before visiting Iceland, I would often dream about this part of the world. I had this one very specific vision, of being at a graveyard in a barren landscape, with black volcanic sand covering the earth, no trees in sight; a dark grey ominous winter sky and the start of a storm that ferociously blew through my hair. The graves were of old Vikings and their markers and monuments reflected the power they had had during their lives. In my vision, I would collapse onto the black earth, laying my body down in a respectful offering to the past. Like a mourning widow, but without the mourning, and without being a widow.

The cemeteries I visited here did not quite correspond with this vision. Yet they had their own air of mystery. A more grounded kind of vibe, like the nature spirits that are believed to be present here. And I happily tuned into that, paying my respect. Saying hello, goodbye, here I am, here we are. Onwards we go. 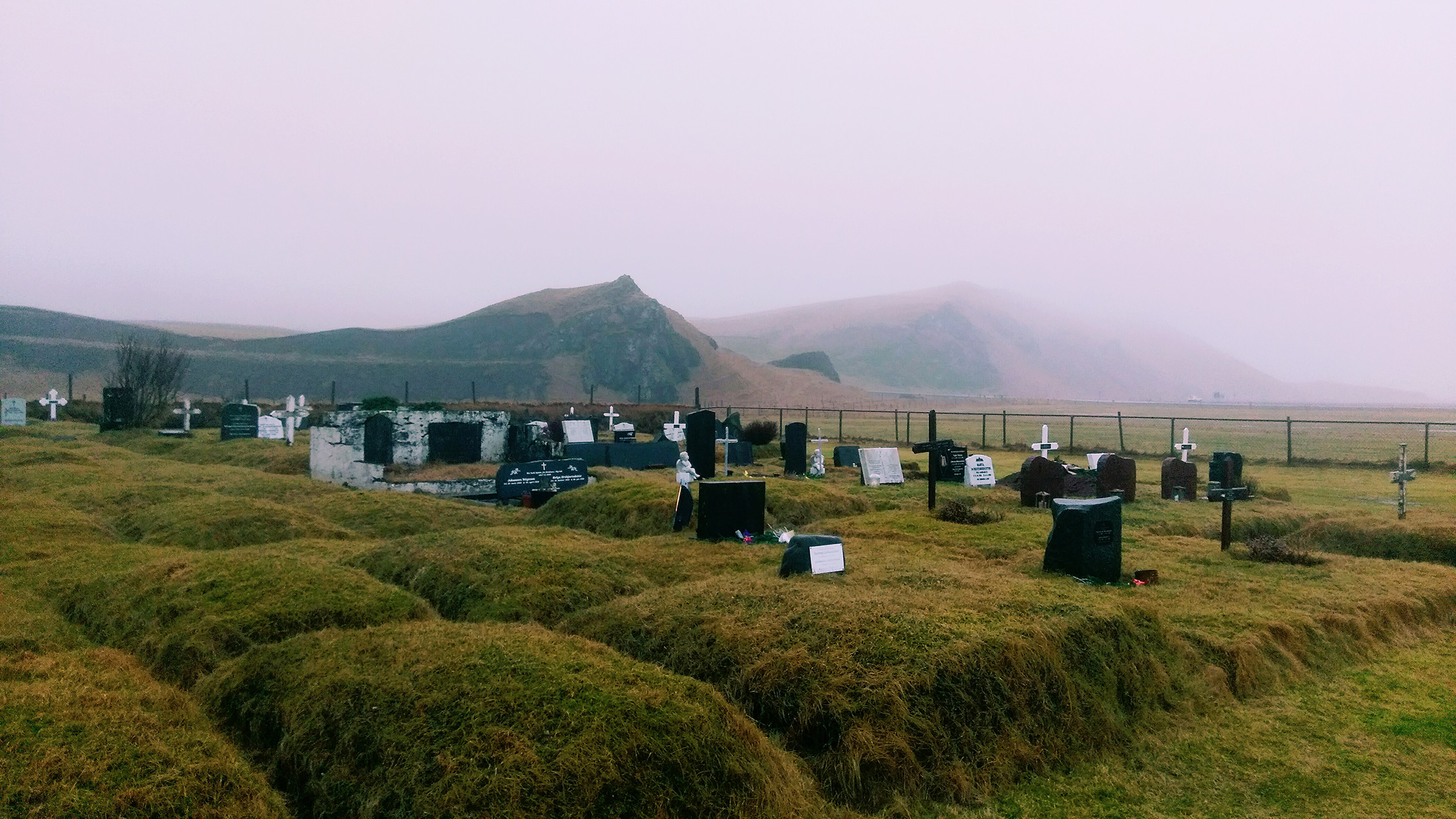