This summer, my love and I went on a fantastic road trip through France. Besides chasing the sun and enjoying the stunning surroundings, this was the perfect opportunity to check out some of the smaller cemeteries in the French countryside. This cemetery review is the first of three reviews of tiny and fairly unknown graveyards in the south of France. In this first one we take you to the tiny village of Camburat, in the Midi-Pyrénées region of southwest France. To give you an idea of how small the village is: according to French statistics, Camburat had a population of 420 inhabitants back in 2007. The following overview of the rise and fall of its population will give you a good idea of how many funerals there are each year:

Camburat : evolution of births and deaths:

When a local dies, they get buried in this beautiful little cemetery, surrounded by corn fields and hills. We were staying at a bed & breakfast (“Le Moulin”) in Camburat and I had already seen there was a cemetery nearby on Google Maps. When we went out for a walk shortly after we arrived, we noticed this sign at the beginning of the road where we were staying. 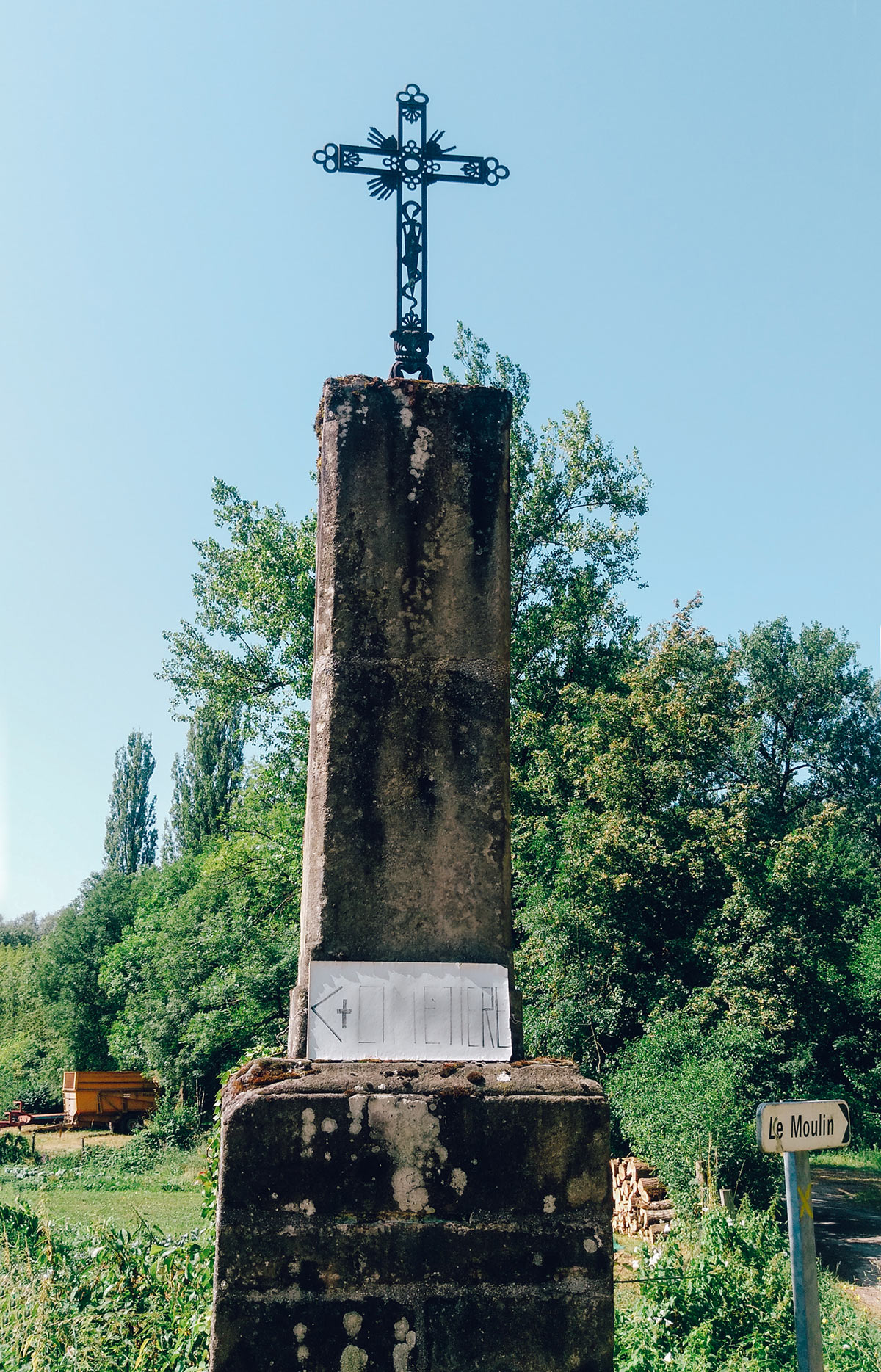 Not having realized earlier that were actually on walking distance from the cemetery, this was a pleasant surprise. We later learned that most cemeteries in France are marked with a cross on the roadside. When traveling through rural France, you notice a lot of these types of wayside crosses and crucifixes. Apart from being religious statements and indicators of nearby cemeteries, some of them are way-markers for pilgrimage paths, or they can be used as landmarks to mark the boundaries of villages.

After passing the cross, a narrow path led to a gorgeous lush field that partly surrounds the cemetery.

The cemetery does not have a special name, but is called Cimetière Communal de Camburat, which means “Communal Cemetery of Camburat”. It is surrounded by hills and fields, has a low stone wall and a simple entrance gate, which luckily wasn’t locked. 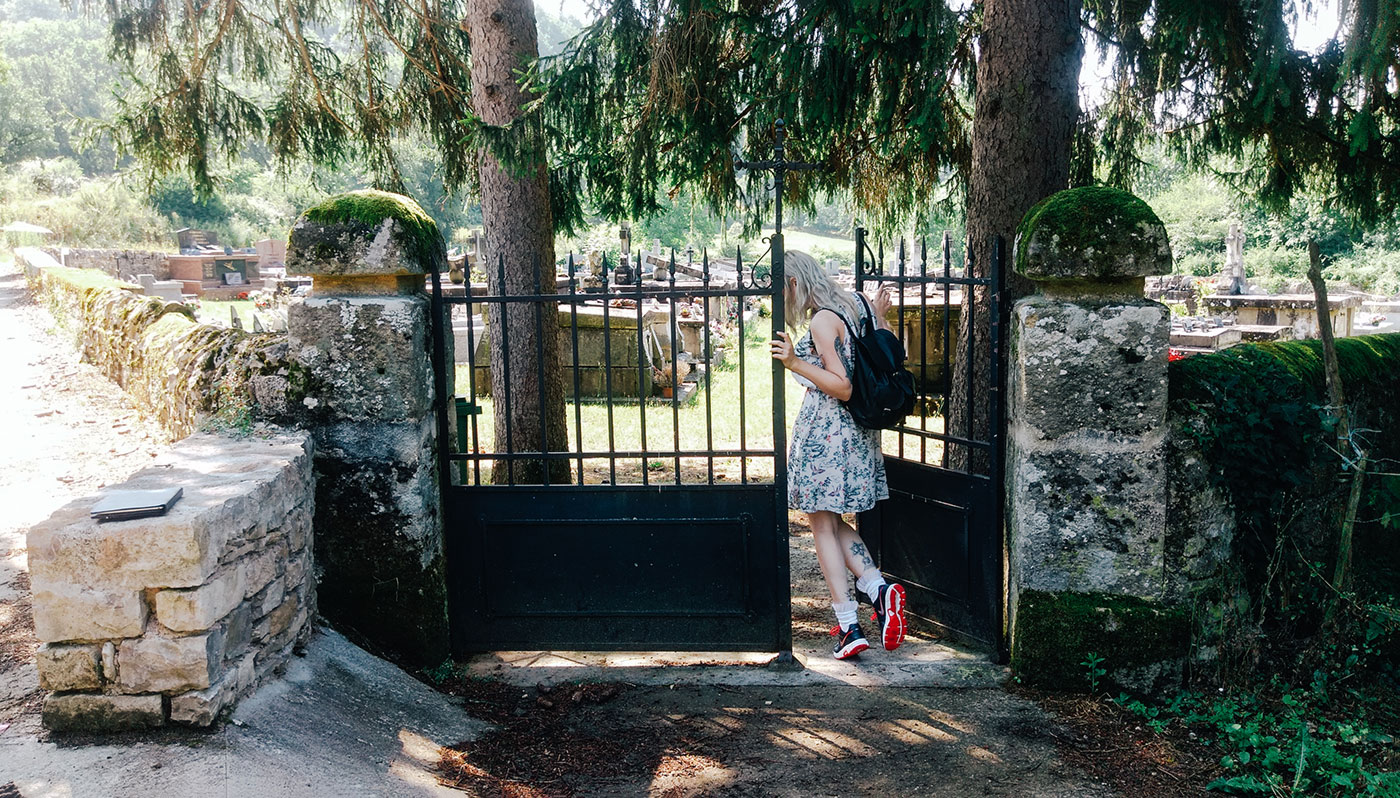 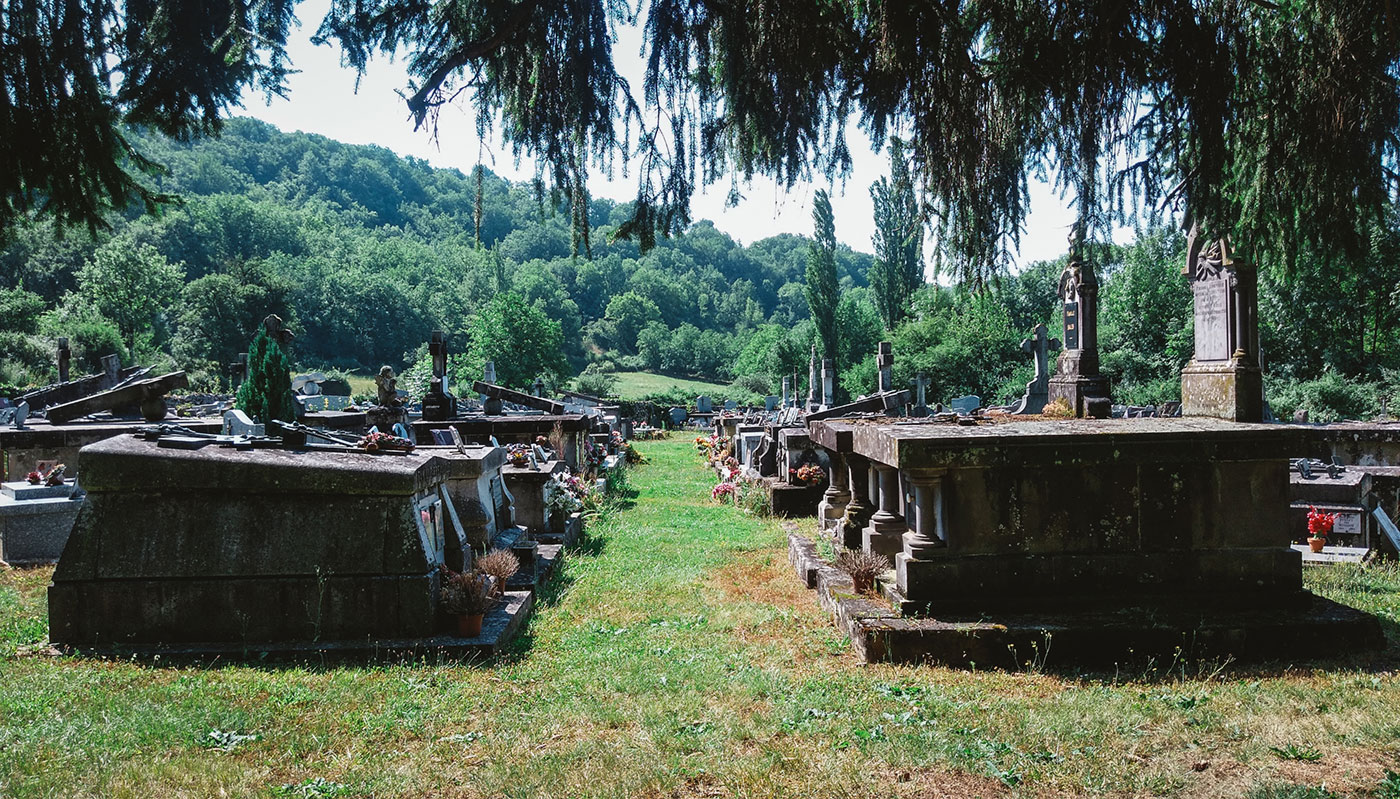 The first grave that caught my eye was a high tomb for a French soldier who died in Germany in 1926, at the age of 21. A memorial plaque was placed between the two pillars in front, showing a photo of the young man in question. It reads, “To our beloved son…” which indicates it was put there by his parents. What was most striking to me was how well kept the grave looked, after almost a century. 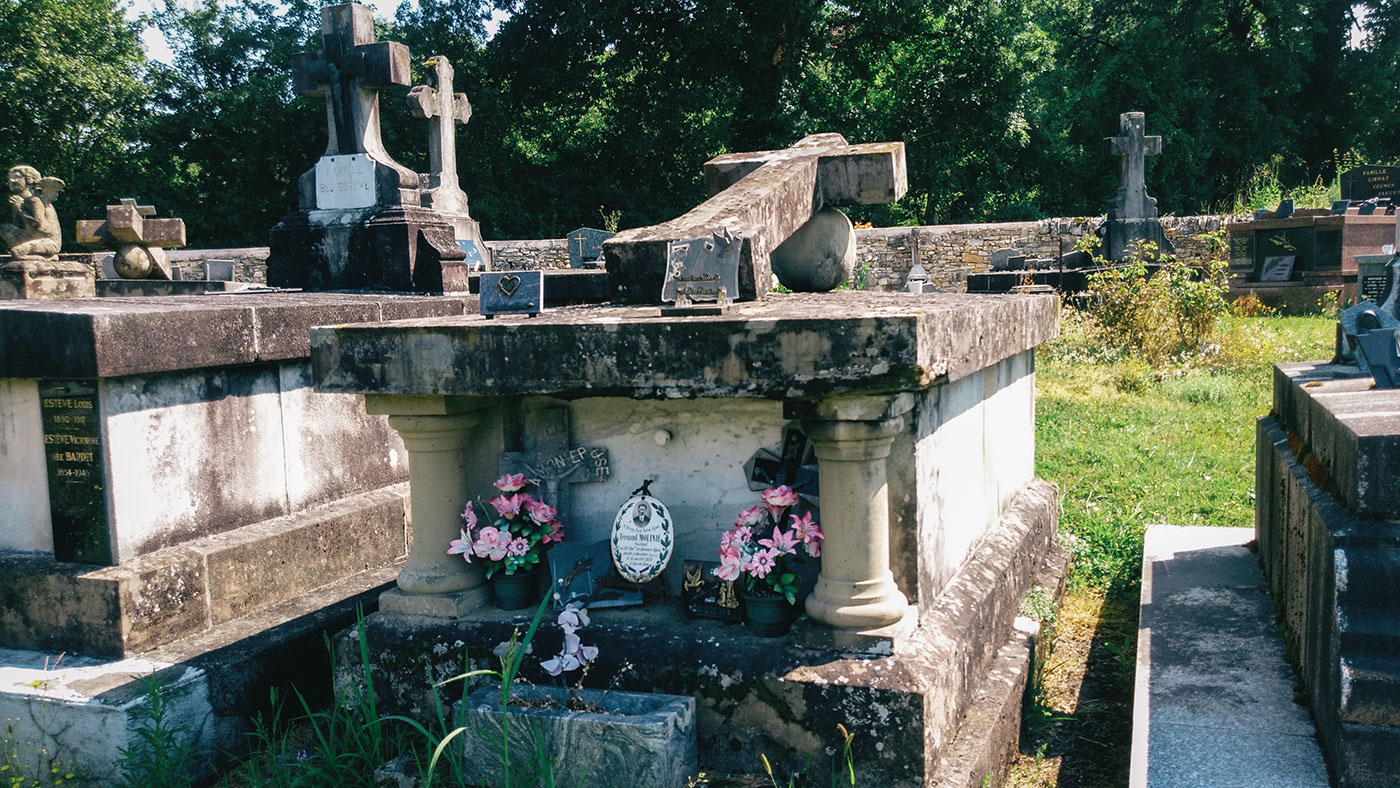 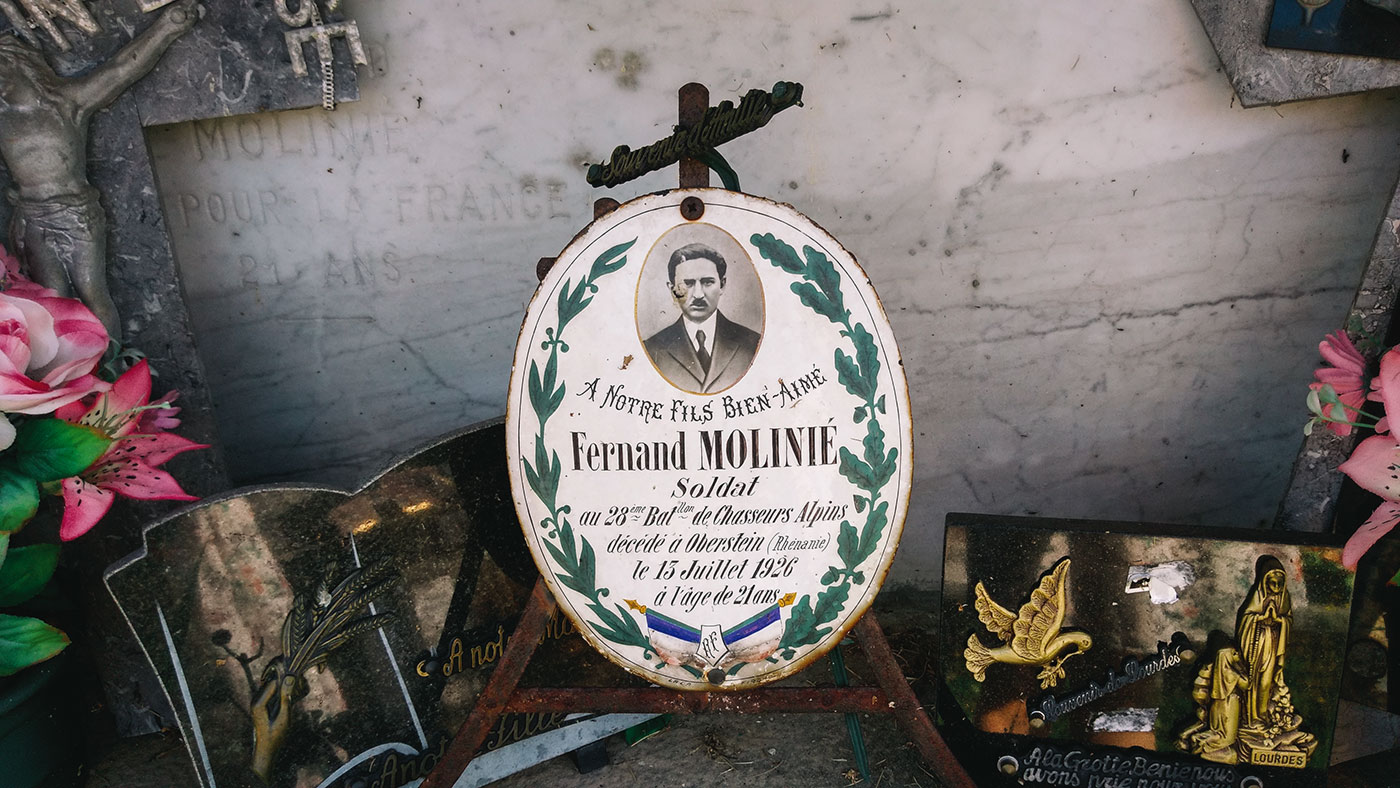 While walking around and exploring the other graves, I soon noticed how it seemed to be a custom here in France to add countless ornaments and stone plaques on top of the graves. I wondered if they were attached to the gravestone, but as I touched one I noticed they were simply put on there without being secured. 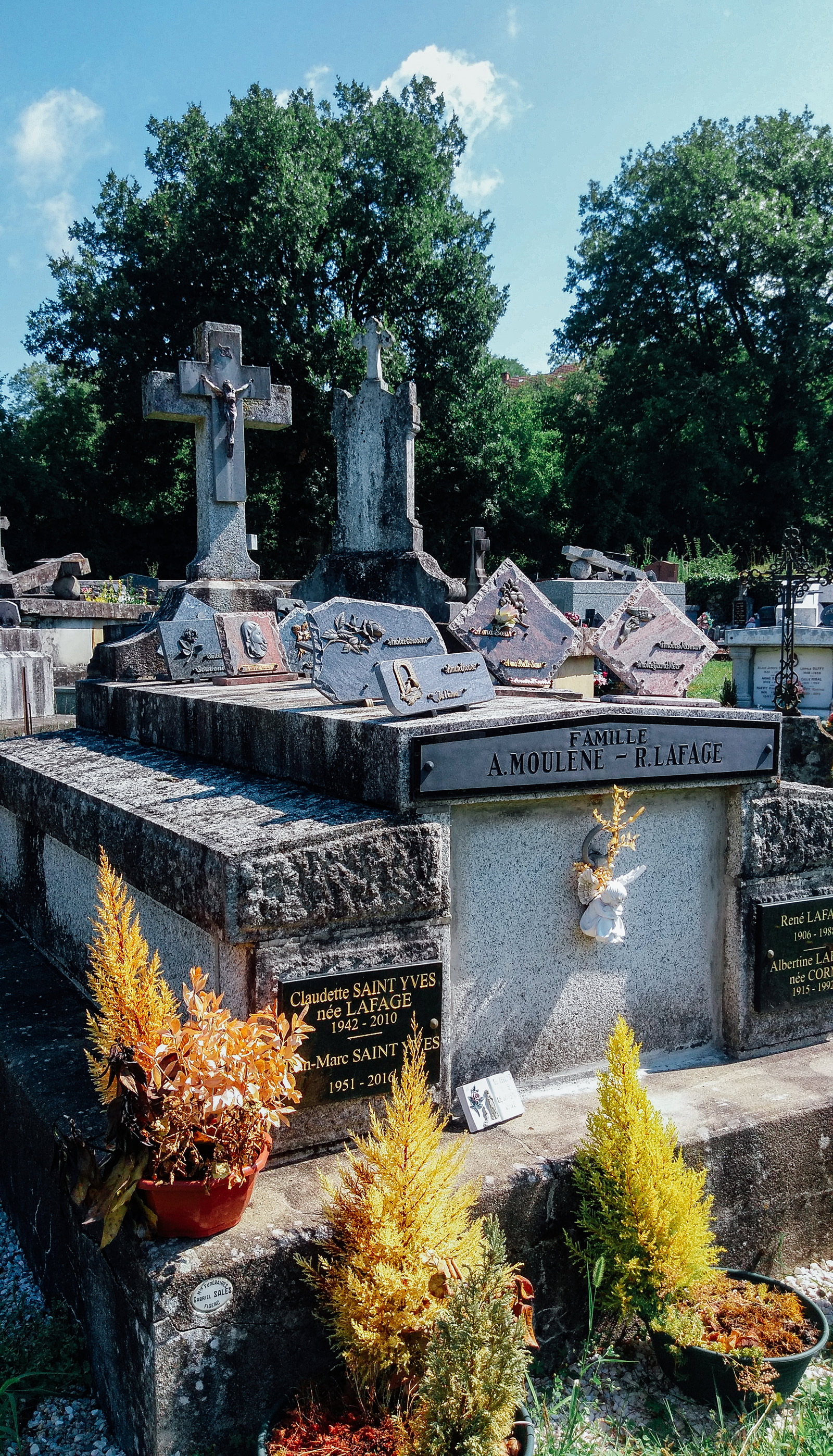 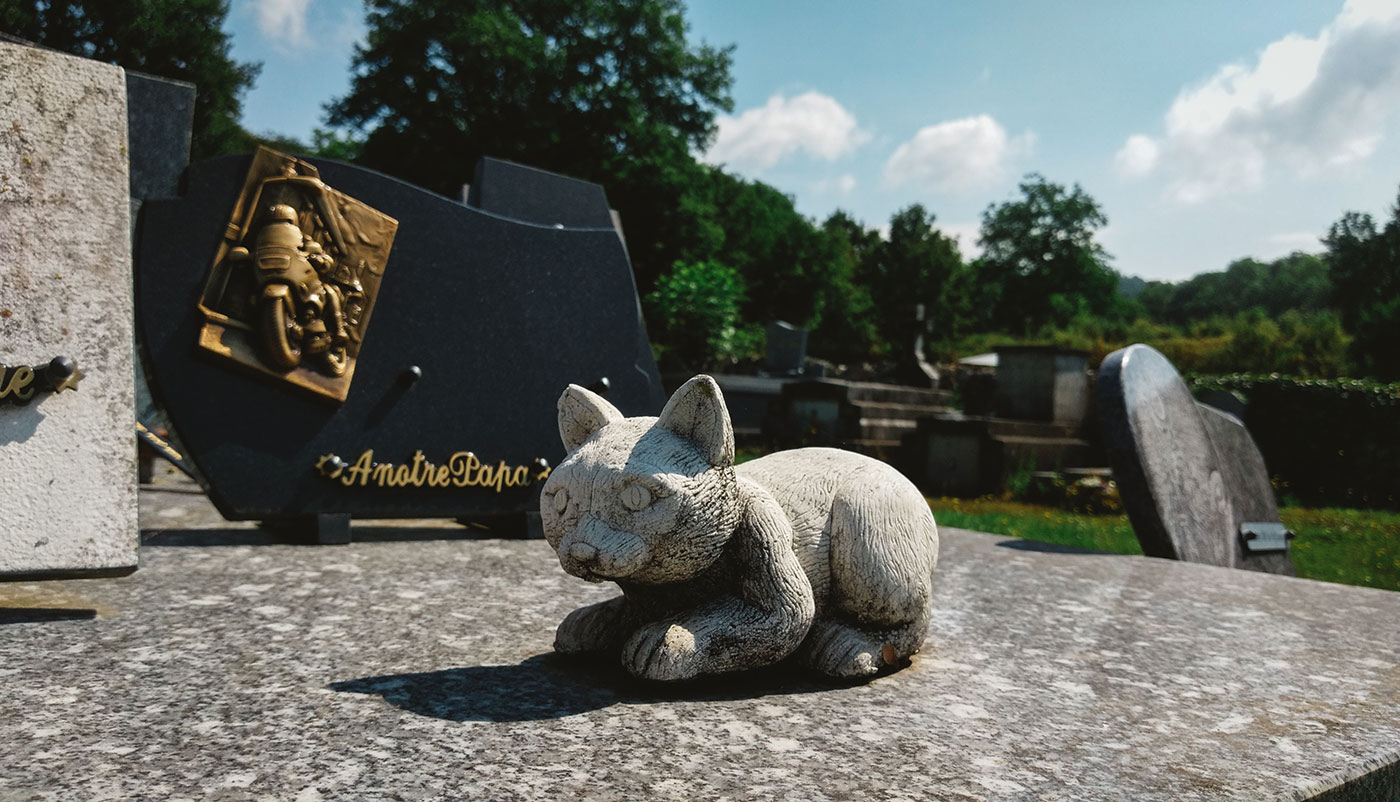 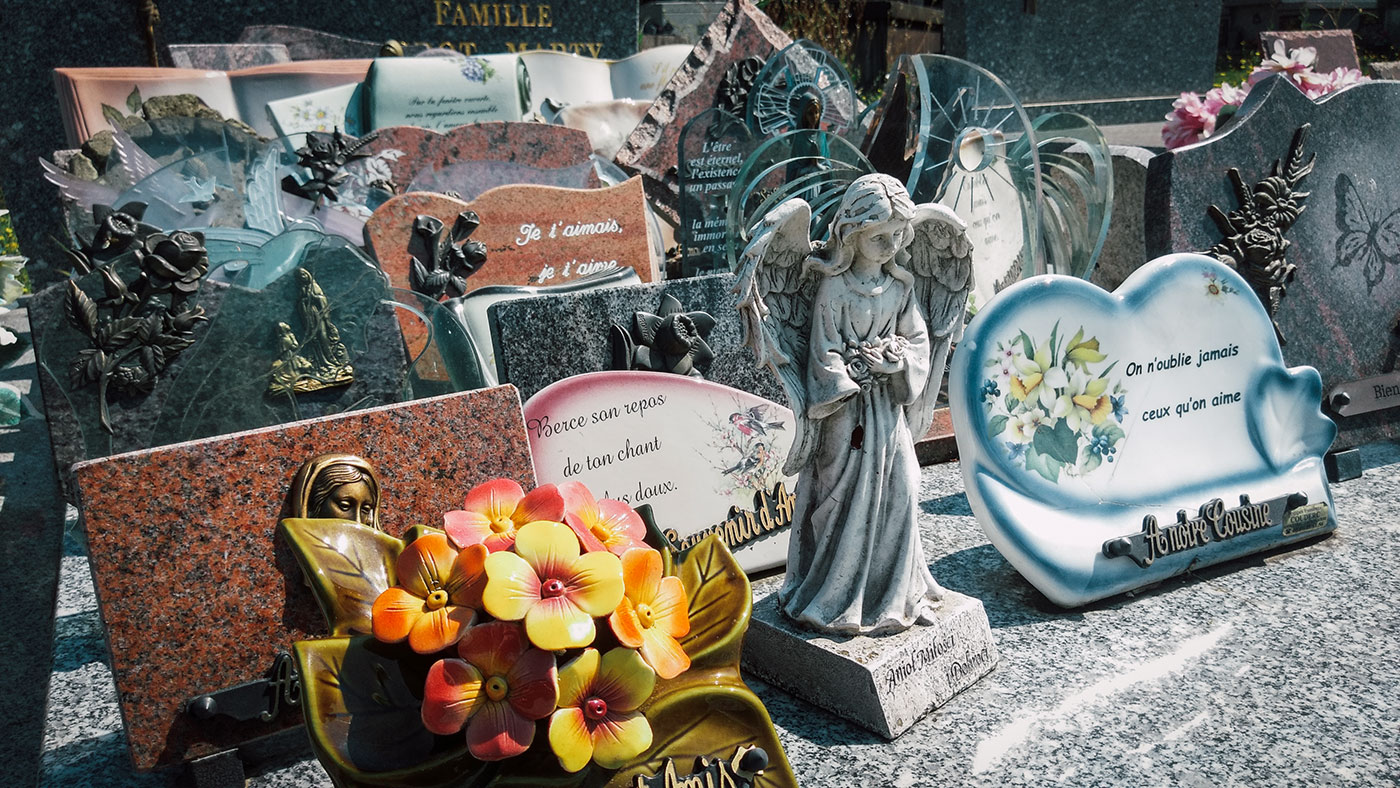 Some of the plaques resemble opened books, with a message inscribed in it to the deceased. Others are religious images, or porcelain flowers, animals, etc. Through these customized memorial plaques, people are able to leave their own personal message for their loved one. Instead of having one central headstone, these plaques together form a sort of ‘collective’ gravestone. 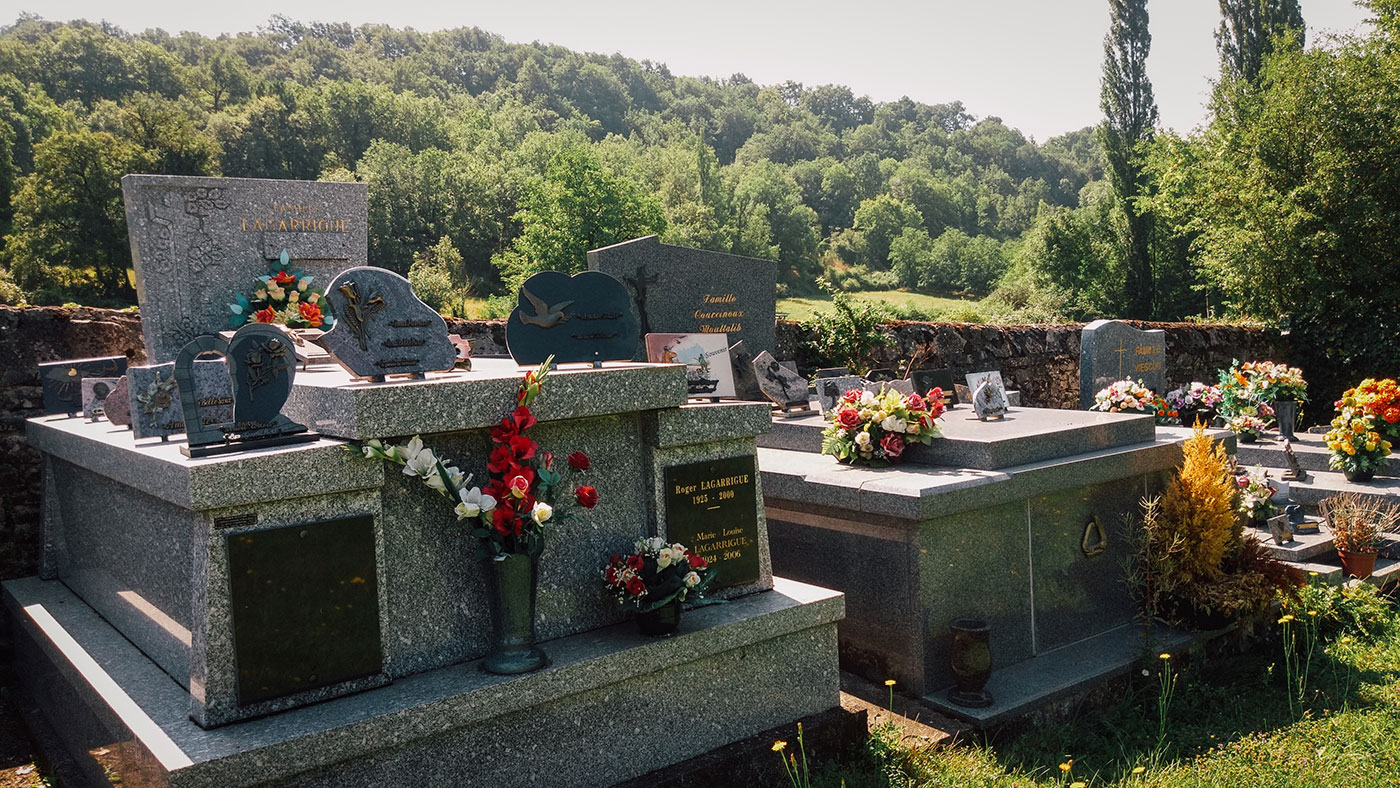 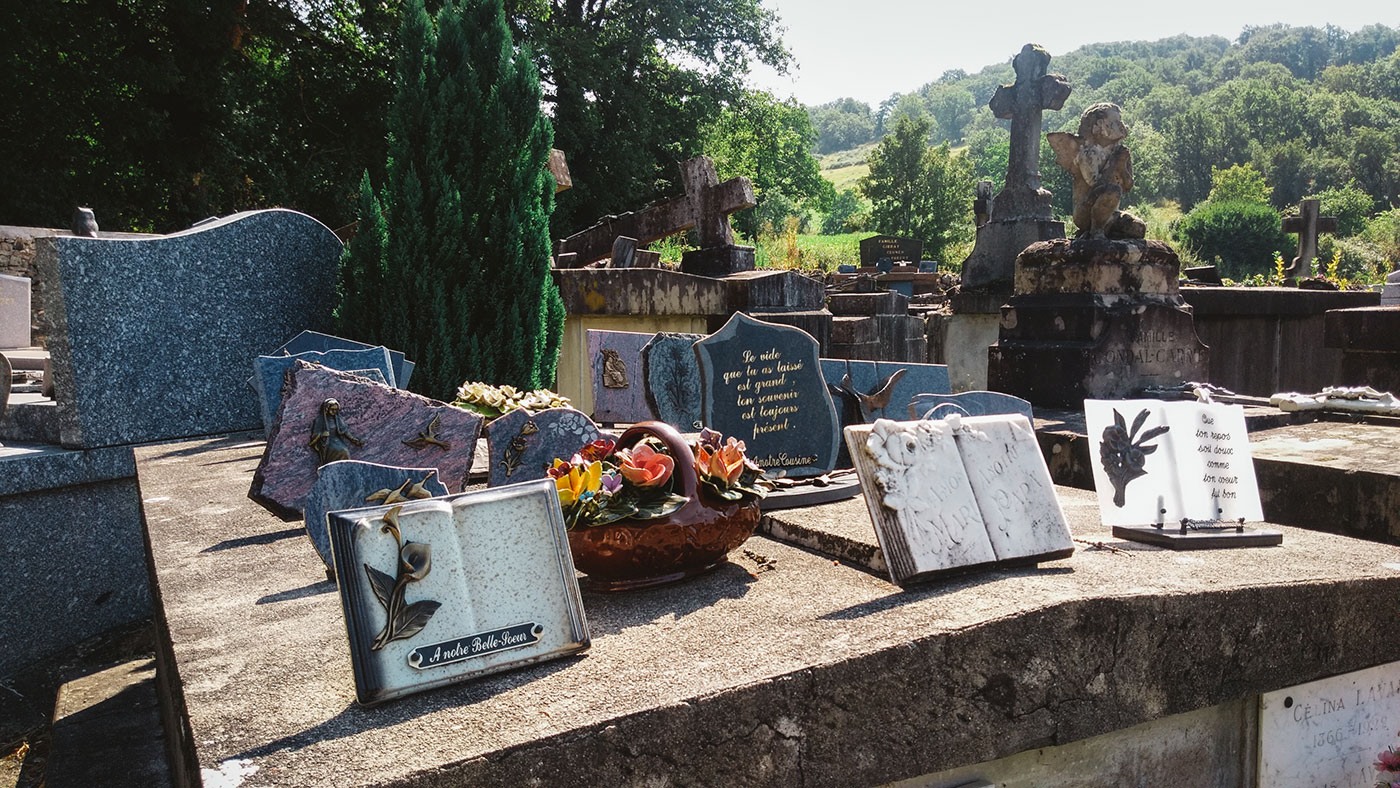 In one of the villages we drove through we saw a funeral home or ‘pompes funèbres’ that sold these type of memorial plaques, but unfortunately it was closed. You can also order them online. One of the French funeral homes explains about the plaques: “This is to commemorate the passions of the deceased, by placing memorial plaques on his grave. Select fishing, nature or other religious motives to witness this timeless memory.” 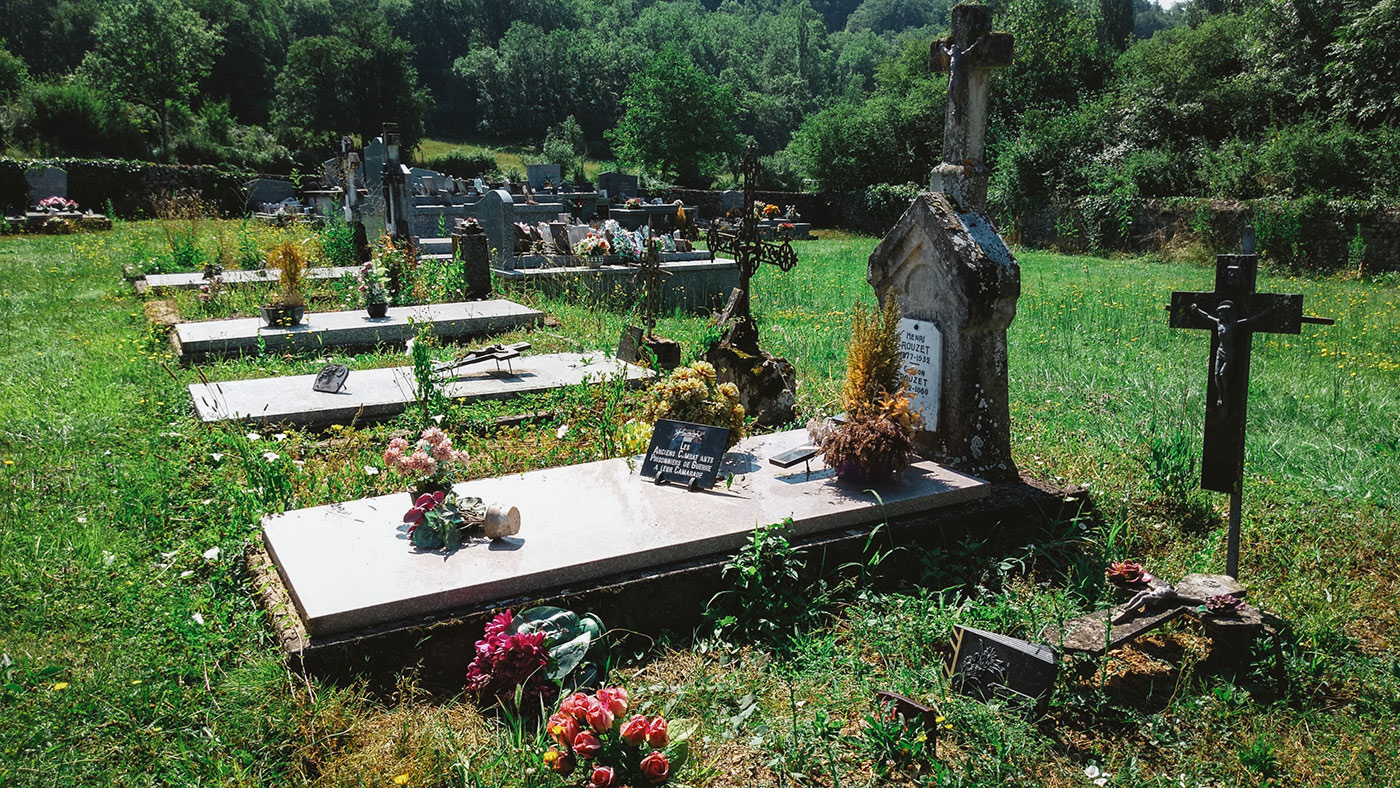 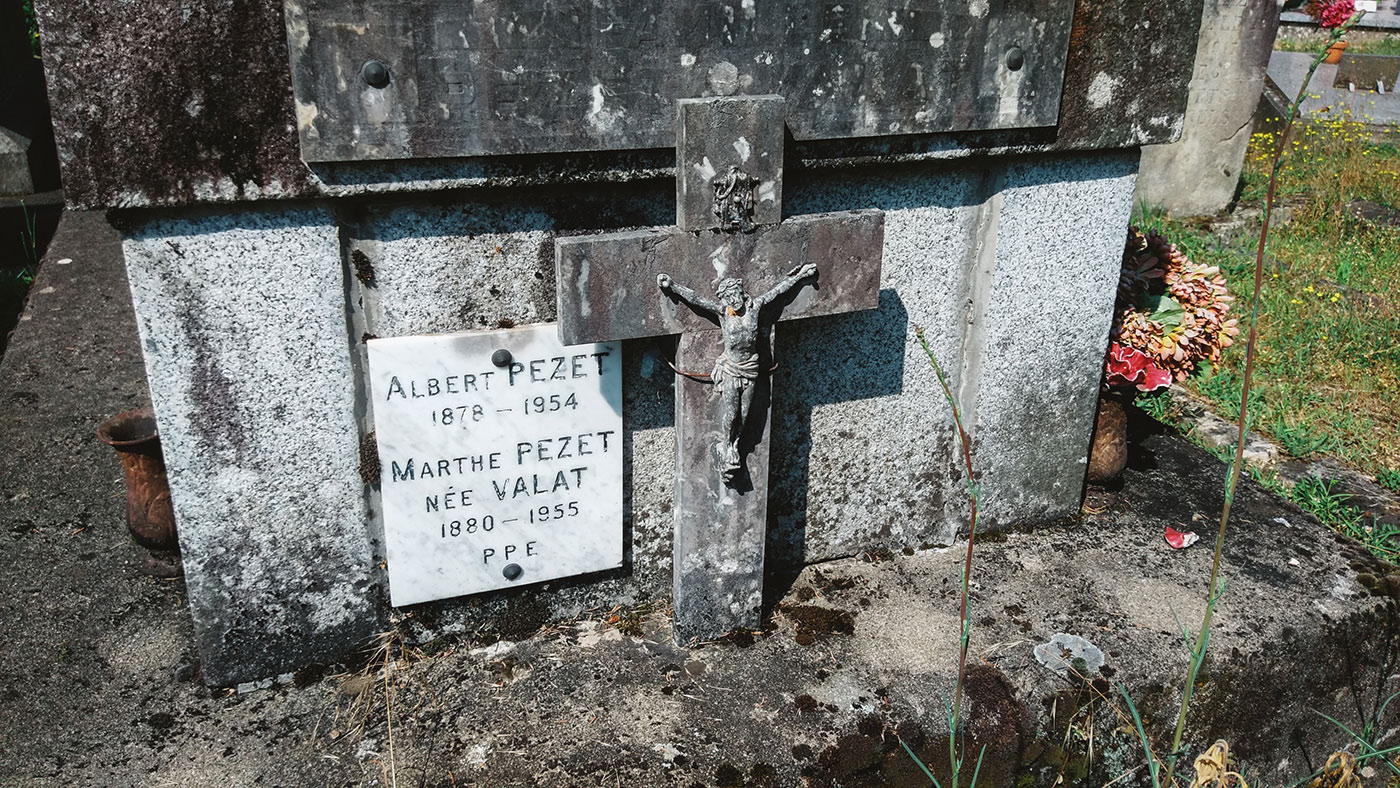 Of course there was time for the obligatory cemetery selfie, this time with half squinting vampire eyes. 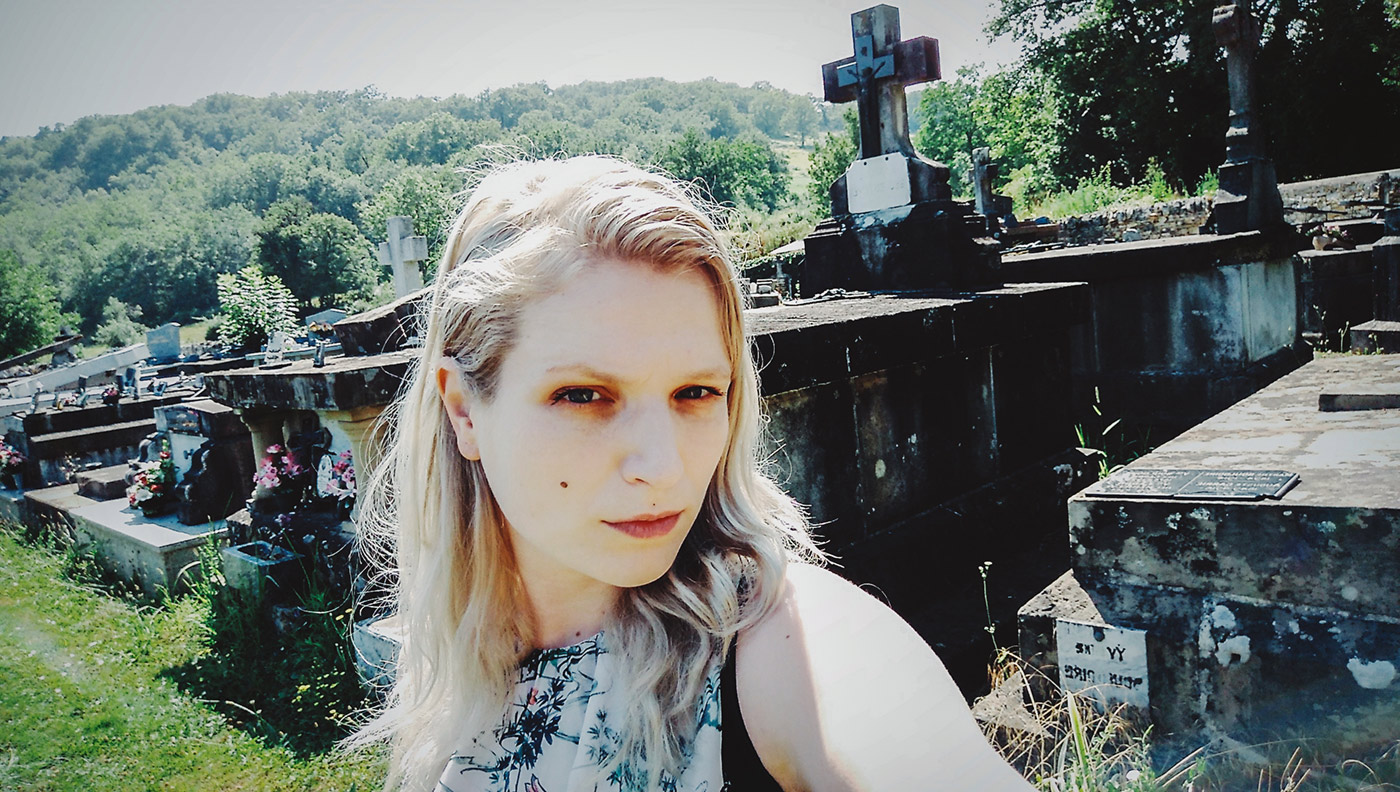 We spent a while in the sun, roaming the graveyard grounds, reading the names on the graves and remembering the inhabitants of Camburat of times past. It was a very calming and serene experience, with birds chirping in nearby trees and the vast expanse of the green hills that surrounded us.

Stay tuned for part 2 of our cemetery reviews of France, in which we take you to the medieval village of Figeac. 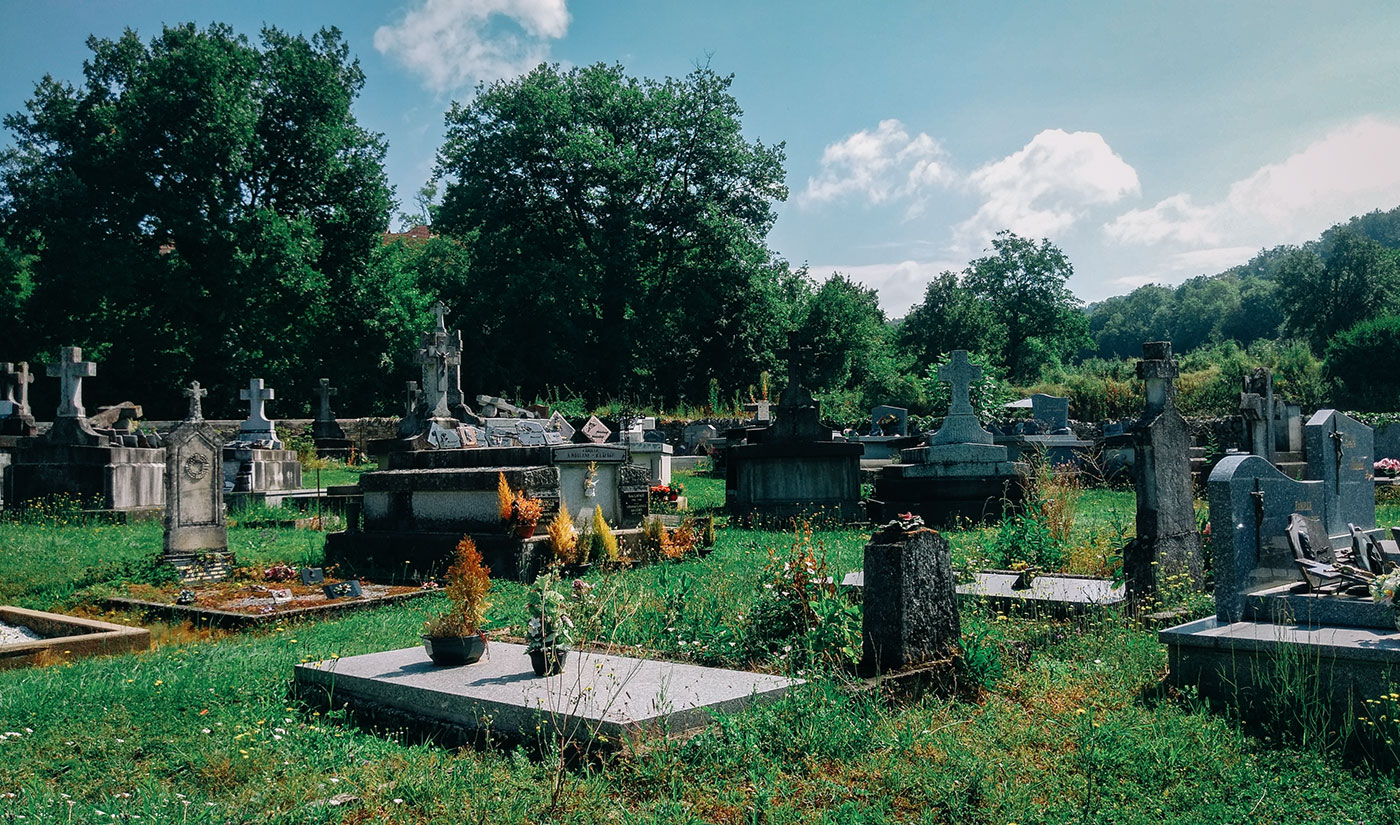 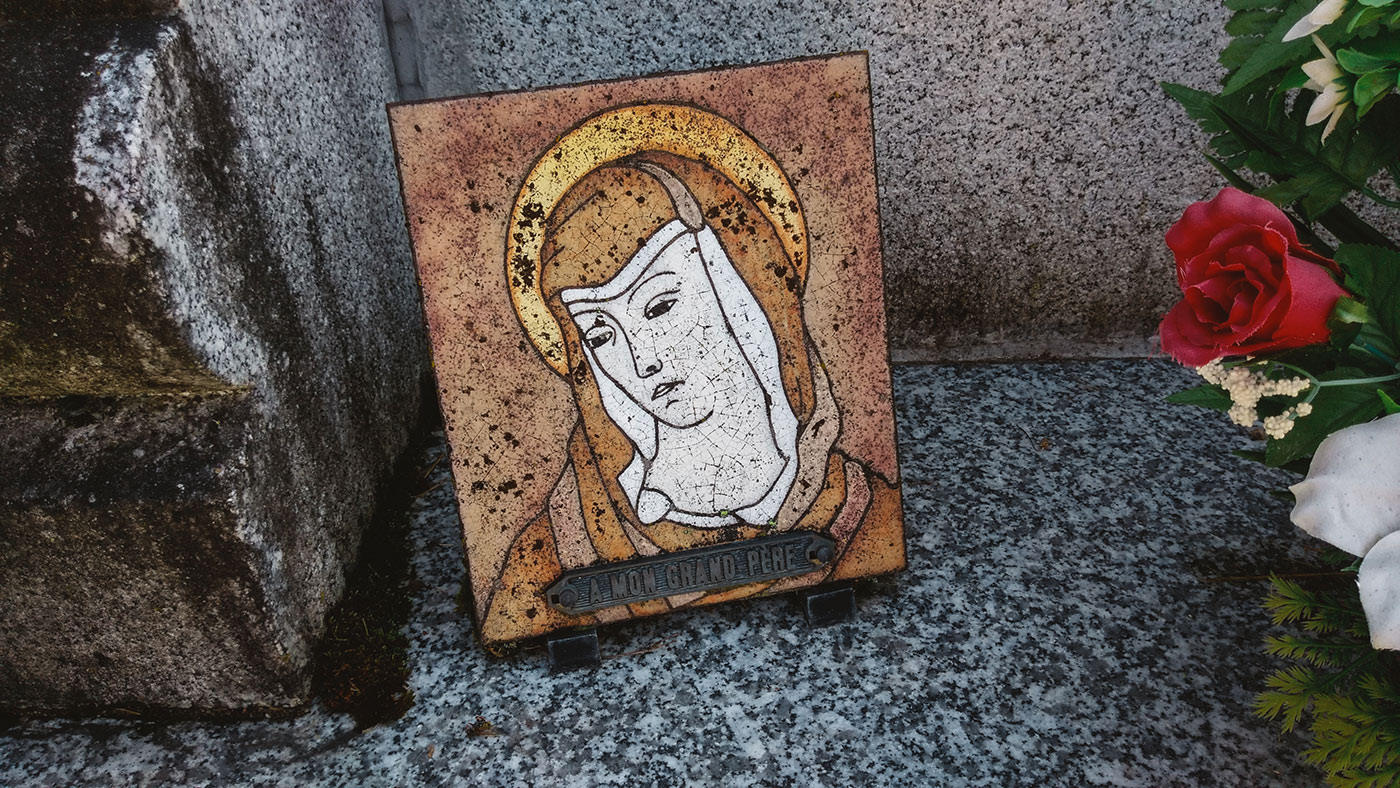 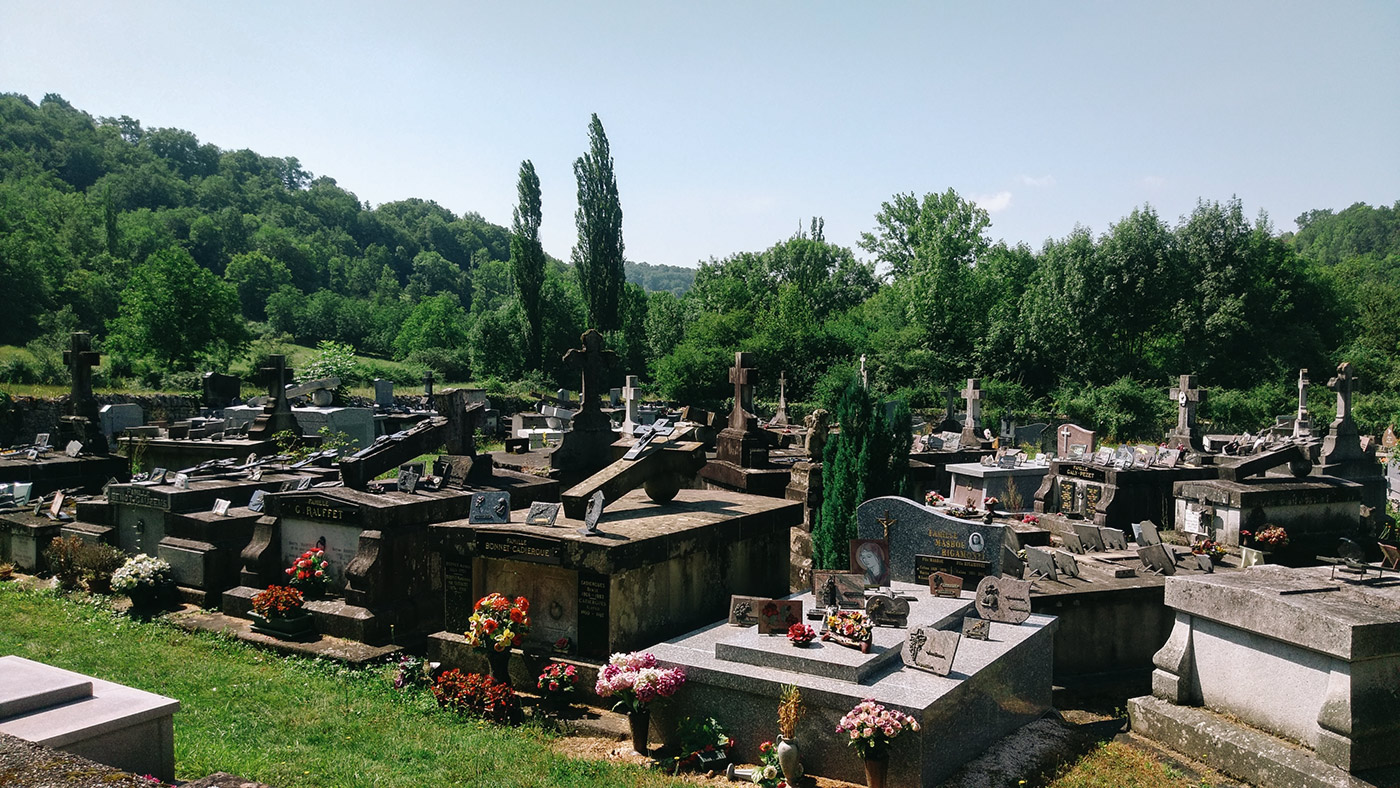 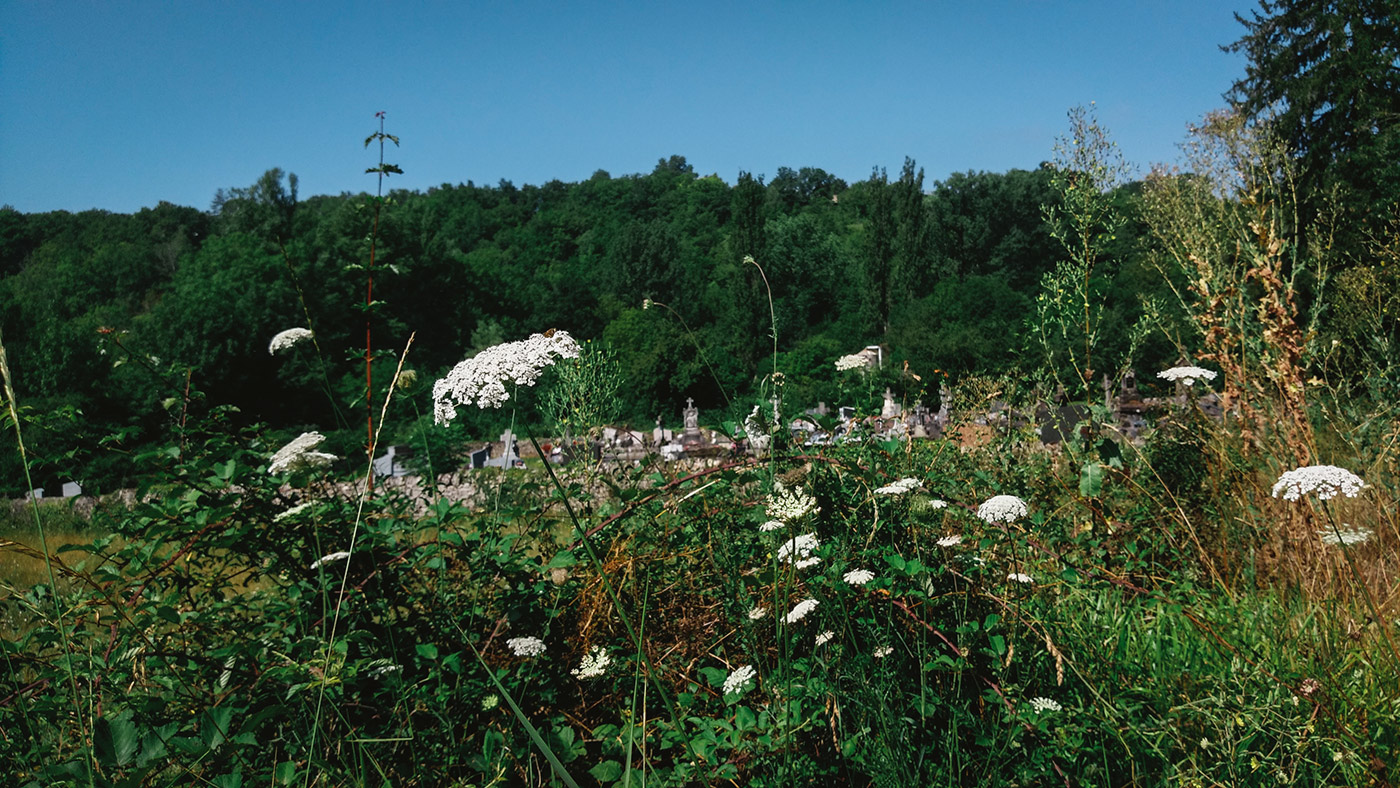